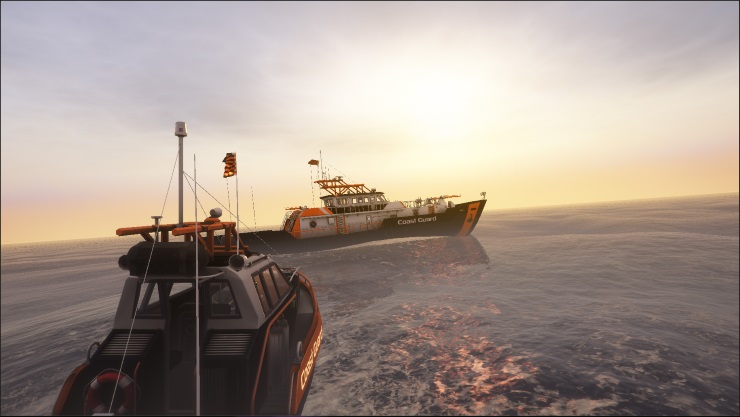 If you want to sail the seas, generally be a busy body and play as a protagonist who effortlessly manages to be as appealing as a tuna-flavoured lollipop, all while enjoying some of the worst voice acting in the existence of video games, then Coast Guard is definitely for you. It may have some nice features and some of the missions can be a little entertaining, but on the whole, Coast Guard will more likely sink like the Titanic than sail like the Jolly Roger.

You play as Finn Asdair, a coast guard officer who deals with danger on a daily basis. From the get-go, you’re involved in a high seas chase that entertains about as much as Speed 2: Cruise Control. These opening moments give you a really bad impression of Coast Guard, and the voice acting that follows only cements the disappointment. If you were to imagine a porn film without the nookie, then that’s the calibre of acting present in Coast Guard. The enthusiasm is forced and the emotions the actors are trying to portray feel misplaced and disingenuous. The crew you sail with are rather generic and at times you’ll find yourself squirming at some of their cringy responses to your abrupt questioning. One thing I did notice, though, is that your forensics specialist Larry plays a Game Boy – the guy has taste, even if his personality is a little dull. You’ll laugh at how bad Finn thinks out loud too, especially as Reality Twist have tried to use this as a device to help you work out what to do next on your mission. “A hammer? Hmm… I think I’ll hang on to this,” Finn says, stroking his chin, playing with his pipe and adjusting his deerstalker hat (OK, he doesn’t have this apparel, but from the embarrassing inquisitive tone you’d think he was Sherlock). You’ll be rolling your eyes constantly at the frequency of this. It makes you wonder whether this is an error on Reality Twist’s part, or if they are paying homage to Baywatch with his forced acting.

Finn is suffering from memory loss and is struggling to separate reality from his own dreams, so it’s up to you to help piece the information together. There are 15 missions in total, and each one tries to offer something new, all while attempting to deliver more substance in its narrative. Unfortunately, Coast Guard’s story is incoherent and choppy, meaning you’re never really invested in Finn’s story. Some of the missions can be pretty fun, and even if you couldn’t give a monkeys about Finn’s troubles, there will be something to hold your attention for a little while. Controlling the boat is pretty straightforward: you can use the standard W, A, S, D manoeuvring system, but there’s also a little wheel in the bottom right of the screen that lets you control with the typical boat steering wheel. The idea is a nice one; however, it can be a little awkward to control, especially when you have to click and hold while steering. The handling feels very similar to the likes of GTA, so it shouldn’t take long for you to get acquainted with its sailing mechanics.

One of the worst crimes committed by Coast Guard is the way it implements its item menu. It isn’t clear when it asks you to use an item from your inventory; after you work out how to use the items yourself (because the tutorial doesn’t seem to want to help you more than with a few confusing sentences), you’ll find it relatively easy. Unfortunately, spending twenty minutes trying to work out how to use a hammer to bash a switch provided one of the more infuriating moments I experienced. As for the way it looks, Coast Guard actually succeeds in many ways. Your vessel, the Daniel Defoe, has been designed really well, giving it a welcomed realism. Every detail from the dials and monitor in the boat’s cockpit to the kitchen utensils below deck make you appreciate the work put into the aesthetics. Some of the animations while sailing can be a little glitchy, but nothing that will affect the overall game and, for the most part, Reality Twist has done a pretty good job with how it all looks.

From terrible voice acting to confusing game mechanics, you’d probably be better off without Coast Guard in your collection. It’s not full of bugs or visually weak, it just feels that at times Reality Twist got a little side-tracked with the ideas and muddled their implementation. As simulations go, Coast Guard tries to offer a more immersive experience than other titles, but without any real fun to be had and only a handful of missions that truly test you, the appeal of being a Coast Guard is lost at sea.

Your boat’s design is well thought out.
Country music on the radio is a nice little touch.

Coast Guard struggles to keep its head above water and offers very little to keep you going back for more.