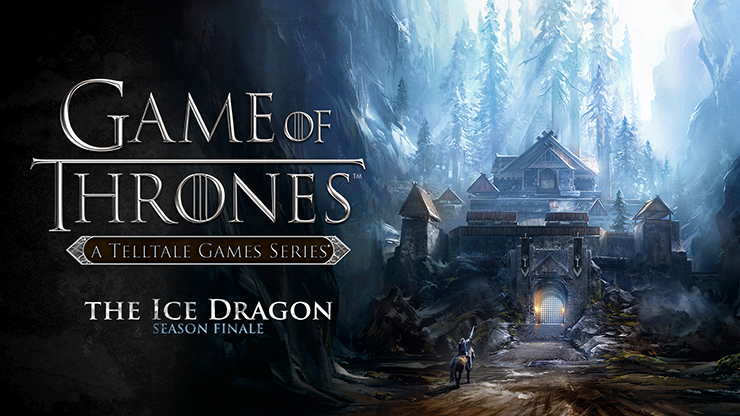 You’d think that George R.R. Martin’s literary works, along with the TV show based on said writings, would be a cinch to adapt for a video game: the lore is vast and the world building is second-to-none. However, TellTale Games’ attempt at bringing A Song of Fire and Ice to this medium has left some with a sour taste in their mouths. The series has been so up-and-down to this point, it was difficult to predict whether the finalé would have the punch contained in the mammoth Hardbacks, or the much-celebrated HBO TV show. True to form, Game of Thrones Episode 6: The Ice Dragon can be a gripping story, at times, whilst some arcs end on a whimper.

After episode 5’s crescendo, the stage was set for the series’ conclusion to be everything that we expect from the war over the Seven Kingdoms. House Forrester has been rocked after losing Rodrik, or Asher (depending on your choice), and Mira is under threat in King’s Landing. The only surviving playable character that is approaching some form of happy resolution is Gared Tuttle, as he nears The North Grove.

With Ironrath in turmoil, Asher, in my case, is the real focus, here. His journey is the best thing in this episode. It’s one of the best arcs in the series, in fact. A lot of that is to do with the detestable Ludd and Gryff of House Whitehill. These vicious bastards have been a constant threat to all members of the Forrester clan and everything is coming to a head. It’s been the most consistent thread, throughout. The Ice Dragon includes some dramatic moments with tough decisions to make, in a short timeframe, with one major one at the dining table involving all the primaries of House Forrester and House Whitehill. Mira’s story has, possibly, the most intriguing closing moments, but overall, her narrative has felt somewhat stagnant for a few episodes. King’s Landing was an exciting prospect in the first act, but Mira’s story has waned with every passing dialogue option. Revelations in a carriage and her aforementioned final moments are examples of her few compelling beats. It’s a testament to Natalie Dormer’s class that even in only a few minutes, Lady Margaery is again a standout in the handmaiden’s tale.

Lord Gregor Forrester former squire, Gared Tuttle, began the series as its most endearing character – one that you can truly get behind. That makes his fall from grace the most disappointing. For a few episodes now, Gared has been attempting to get to The North Grove, to fulfill the dying wish of his former Lord. Like seeing the monster in a horror movie, The North Grove and events that take place there, lack the gravitas that his journey deserved. It falls completely flat. Add to that, rotten accents and phony performances from a number of new secondary characters and the once great underdog goes out like a lost puppy.

Shoddy voicework isn’t the only issue I have with the audio, though. The technical problems that cast a dark cloud over TellTale Games’ offerings are something which are still, years later, causing problems. You hear voice work clipping before the end of a sentence and music terribly mixed between scenarios.You see friendly NPCs pop into the environment, seemingly from out of nowhere, and lip-syncing that would make other episodic affairs from 2015 blush. While evidently a deliberate choice, the oil-painting art style is still as distracting as it was back in episode one. During the moments where I was beginning to be enthralled, my concentration wavered  because of horrendous looking backgrounds. This has been a regular occurrence in the six episodes. It was the wrong decision, day one, but Telltale at least stood by its decision with conviction.

It’s clear that there are plans to return to Westoros, as the ending is building toward something bigger in the, as of yet unannounced, season two. There’s some finality to particular stories, but they’re undoubtedly eager for season two. I question whether there’ll be any buzz, or interest, though. After a strong start, Game of Thrones meandered to its finish. The Rodrik/Asher aspect of this chapter had a really strong ending, but everything else just fizzled out.

The North Grove is a letdown.
Mira's finalé is generally poor.

TellTale's meandering Game of Thrones ends with an episode that is very much like the rest of the series. Just "alright".