previous
Minecraft: Story Mode – Episode One: The Order of the Stone Review
random
next
Game of Thrones: Episode Six - The Ice Dragon Review
1 like 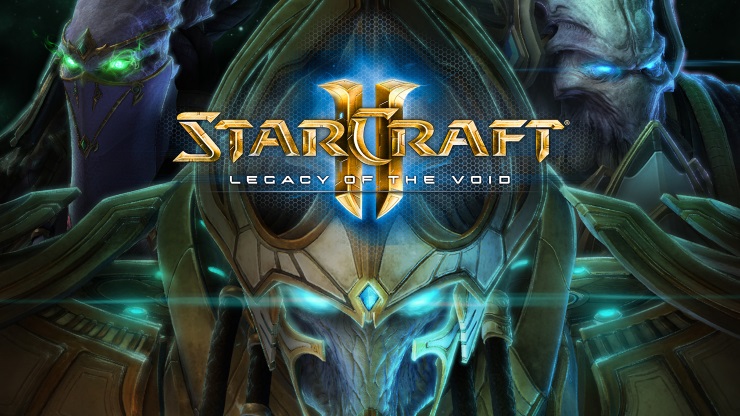 Templar form up into ranks awaiting their command to warp into battle. Their nerves are on edge, their fears simmering just below the surface, and their smoky shimmering eyes locked on their lost world of Aiur. A strong, commanding voice rings out about the gathered Templar – Artanis addresses his subjects to dispel their fears and assure victory. They must retake their home. Smoke and a bellowing voice calling for caution interrupts the speech as Zeratul – the exiled Dark Templar – confronts his old friend. It is to little avail, though. The Protoss warp onto Aiur, and reclamation commences.

If one thing can be counted upon to be completely true at all times, it’s that StarCraft will be a stalwart, persistent force in the RTS scene; the one thing that other RTSs will aspire to be. It was a proponent force in legitimising eSports as a competitive activity on par with sports, it created the baseline for what an action-packed and combat-centric RTS should be, and underneath the camp and often cheesy exterior of cliché lines and predictable plot twists, it has a narrative charm that’s hard to deny. Or criticise, for that matter.

Legacy of the Void sees you in the role of Artanis, whose mantle of leadership – while he wears it well and executes the role convincingly – was thrust upon him. As you battle to reclaim the Protoss home world of Aiur, the Dark God Amon corrupts the Templar on the world and turns them against Artanis’ forces. Amon is the big bad who’s slowly expanding his reach across multiple worlds, corrupting Zerg, Protoss, and Terran alike. He’s even got the Hybrids with him, Protoss and Zerg merged into an abomination of nature. Throughout the story, you’re fighting to eradicate and ultimately defeat this dark evil. Without giving any spoilers, the game’s campaign takes you across a few locations around the galaxy. You’re not just stuck on Aiur, even though that was the goal. You’re chasing a prophecy bestowed upon Artanis by Zeratul, which sees you allying yourself with Raynor and his Terran in the fight against Moebius Corps, who have been assimilated by the Dark God to retrieve an ‘Ancient Artefact’ from the corrupted Terrans. You side with Kerrigan to stop the Dark God from opening the void and destroying everything while simultaneously fulfilling a prophecy, and so on…

I know, it’s a cliché Sci-Fi/Fantasy trope: collect the artefact, fight the evil, save the Galaxy. It’s been done, but there is definitely something here that’s done well. Amidst the “Hold the line!” type sound-bites, there’s something gripping in the story – especially if you’re in any way interested in StarCraft’s lore. It’s the Act Three structure of screenwriting, where everything comes together in a climactic culmination of the past two parts of the story, this time from the final perspective of the Protoss. We’ve walked through Hell with Raynor, we’ve raised Hell with Kerrigan, now we’re going to defeat Hell with Artanis. It’s the perfect end.

DLC Missions will come, this we know, along with hopefully a really robust set of varied co-op missions because this game mode is incredible fun. I got to play the co-op mode with a friend and while we were both a little rusty and green around the gills, it was definitely a good craic. Coordinating attacks and defences, striking at objectives separately or in unison, and getting utterly Stalloned on one or two missions. In co-op you get to play one of six characters: Raynor, Kerrigan, Artanis, Zagara, Swann, or Vorazun. Each character has a different set of units and what they can bring to the mission. For instance, Artanis can call in orbital strikes, place warp fields and use aerial support skills. Kerrigan, on the other hand, is a unit that you can control, and she’s pretty awesome. Vorazun can call in reinforcement Dark Templars that are active for a limited time, wrecking through enemies like there’s no tomorrow before being warped back out, and so forth.

The co-op mode is incredibly relaxed, with a matchmaking included that has been a great experience so far. It’s a wonder they’ve left it so long to add this feature to the game because it fills a niche I’ve had of just playing something relatively stress-free with a friend and not being drawn into long narratives and campaigns. Hoping for a larger variety of mission types and really varied and unconventional scenarios to come from this mode in the future.

Multiplayer is definitely not for the faint of heart. You have three games’ worth of things to know to be truly competitive, and it can be overwhelming. I’m not the best SCII player, but I know a few things. It’s still a challenge even with some of this knowledge, so be warned. You’re going into this with a pool of seasoned players, so make sure you’re well prepared. There are two new units per race which looks to try and force a change in the playstyle, but time will tell whether these make a huge impact on the game. We’ll know more about that when the eSports tournaments kick off in true fashion. In summary of it all, while I don’t want to spoil any of the story for you, this feels like the end. The Epilogue rounds off all the stories in a ‘Finale’ fashion, each hero getting their own version of apotheosis and riding off into the sunset. It is the perfect end to the series, and although there will be a constant drip of DLCs and updates, and the Multiplayer which will continue on and on, there is a sense of it all being, well, over. It feels like we’re saying goodbye to the StarCraft franchise, at least for the foreseeable future. This is of course pending any confirmation from Blizzard, but that’s what I felt.

It’d be sad to see an end to StarCraft, but you have to wonder what else they can do with their brand of RTS style. It’s very different to other titles out there that aren’t StarCraft, but it’s not changing much. Is it still able to retain players? Time will tell, but I’m going to go ahead and say it now: the SC universe is ripe for a co-op shooter or action game.

Campaign should be played after SC2 & HotS.
Doesn’t do a lot that's new.
A little cheesy at times.

A powerful standalone expansion that feels like a last hurrah for Blizzard's seminal RTS franchise.