Minecraft: Story Mode – Episode One: The Order of the Stone Review 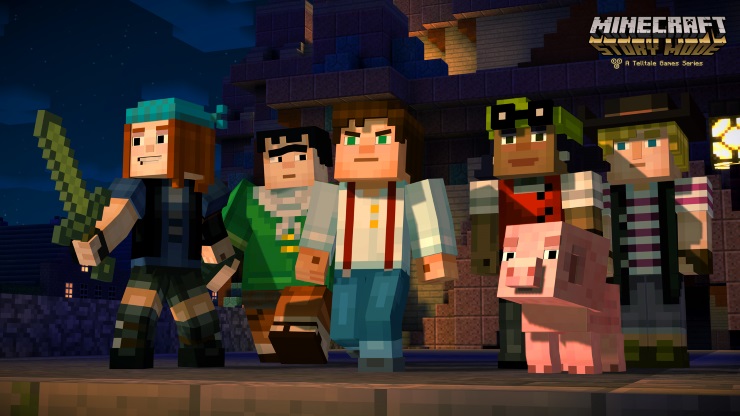 Minecraft is perhaps my favourite game of all time. I’ve spent hundreds of hours in various formats on PC and Xbox, mining, crafting and building. I have created huge monuments to my vanity and spent many, many hours just watching the sun rise and fall in the beautiful, blocky paradise that is Minecraft. It’s my happy place, a game I turn to when I’m feeling down or just simply have no desire to play anything else. Its the game I play when I feel that I need to take some time to regain a little control over my life. For me, Minecraft is pure joy.

So, when Telltale Games announced that it was turning the worldwide phenomenon into their trademark episodic format, I will admit that I was a little sceptical that it could work. Minecraft, by its very nature is a game where the player creates their own stories and adventures, and that is one of the most enduring and beautiful things about it. To have a ridgid story within the Minecraft framework seems at odds with the essence of the game itself. However, having said that, any cursory glance on YouTube will let you know that there are countless hours of fan-made, narrative-driven “stories” involving Minecraft, some good, some not so good. With the many hours I’ve personally spent with Minecraft, it is easy for me to forget that it is exceedingly popular with younger players, and it is evident from the get go that the first episode of Story Mode, “The Order of the Stone”, is very much aimed at a younger audience. The story is standard adventure quest fare, and we are introduced to our protagonists early on. They are earthy, big hearted characters who dream of glory but are ultimately destined to never be anything other than ordinary, until an event that will change all of that. There is Jesse, the main protagonist who the player can choose to be male or female, who is is full of excitement and wonder about the world; Olivia, who is cynical, smart and quick-witted; Axel the gruff, big-hearted hulk; Petra, introduced a little later is the mysterious, fearless adventurer; and Lukas, a member of a rival team of builders who may not actually be all bad. There is even Jesse’s pet pig Reuben, included presumably for laughs, as pigs serve as nothing more than food for the player in Minecraft. Indeed, there are a great deal of jokes about how good Reuben smells when he is accidentally scorched in a fire, all with knowing winks to an audience that is no doubt very familiar with the purpose of pigs in the game.

Without detailing too much of the plot, The Order of the Stone follows a fairly standard path for this type of tale. Something terrible happens in the world and it is up to our group of friends to step up and become the heroes they have dreamed of becoming. The writing is a bit hit and miss, with most of the laughs coming from the player’s knowledge of the source material. I played through this episode twice, once with Jesse as the female character and once as the male. The voice acting for both is very strong, but personally I found Patton Oswalt (Remy from Ratatouille) a more engaging and funnier Jesse than Catherine Taber’s. Female Jesse seemed drier and more earnest, and as such I had less fun in the episode. Mechanically the game is like all the previous Telltale Games stories. There is very little interaction required from the player other than dialogue options and the occasional quick time event to avoid perils along the way. Slightly different to previous games I have played, there doesn’t seem to be a fail state if you’re not quick enough to make the button press and this is presumably to cater to the younger audience.

Slightly off the beaten track with this type of game, and in keeping with the source material, there are some fun little moments where you get to craft certain items on the crafting bench to help you progress the story. Experimenting a little, there are even options to create items that aren’t part of the script, providing of course the player is familiar with the recipes required for those items. It was a rare moment of freedom in a tightly-scripted environment that I really liked.

Visually, Story Mode nails the Minecraft aesthetic. The characters are blocky and crudely realised, however they do move with more fluidity than you do in Minecraft itself. The environments will delight fans; I did find myself looking at the buildings and thinking that I could use that idea in the world I am currently building, and there were a few “oh” moments when I saw blocks that I don’t usually use being used in interesting ways. The Minecraft geek in me also observed that this has been created with the PC version of Minecraft and not the console version, as there were blocks that have yet to make the jump between platforms, a fact that will no doubt engage young fans. Player choice is always interesting in these games, and whether it does actually have an impact on the final outcome is too early to say. The episode does, however, end with a fairly clear choice that will no doubt impact the second episode.

In short, the first episode of Minecraft: Story Mode is a solid, functional, but not particularly outstanding introduction. It’s a shame that the delivery from the different voice actors for Jesse are, for me, the difference between a game that is a bit of light-hearted fun to one that is a bit of a chore to complete. Despite some of the shortcomings of The Order of the Stone, it is clear that this is a game created for the younger and most ardent of Minecraft fans. There are plenty of in-game references and knowing nods to an audience that has spent hours upon hours trying to learn redstone tricks, or creating an automated chicken farm (guilty as charged!) The story is good fun, and I’m interested to see how it plays out over the next few episodes, and at the very least playing Story Mode has re-ignited my enthusiasm for Minecraft – I now have a new design for lighting utilising a hopper!

(And yes, we’re aware of how late we’re publishing this review)

A solid, functional episode, but one clearly aimed at a younger audience and therefore less involving than previous Telltale adventures.

Should Gamers Worry about Internet Security?
Evil West | 6 Tips to get you started
Pokemon Scarlet and Violet Legendaries | How to find and unlock Legendary Pokemon
The Devil in Me | How to keep everyone alive
The Devil in Me | How to kill everyone
Escape Academy: Escape from Anti-Escape Island Complete Walkthrough
Escape Academy Take to the Skies Walkthrough
Social Media
SUBSCRIBE
All content copyright GodisaGeek.com
Fonts by Google Fonts. Icons by Fontello. Full Credits here »
Posting....