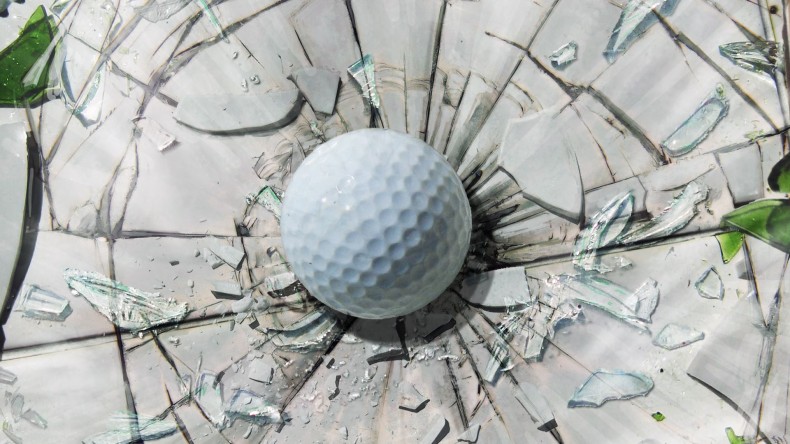 Originally an optional mode in Burnout 2, crash mode was an addictive little gem that saw you throwing an automobile at fast moving traffic looking to cause as much damage as possible to rack up a high score in fictional monetary value. Three-fields Entertainment are made up of a pool of talent from those days on Burnout and their first game takes place with small balls and destructible scenery to create Crash Mode in a microcosm.

You select a country and then a location, at which point you’re tasked to slam a golf ball around a room (or two) in an attempt to cause as much damage as possible to rack up a high score. What occurs is a highly impressive technical showcase as these realistic seeming environments are filled with an obscene amount of individual destructible objects. Tables break, fruit scatters, boxes fly plates shatter – it’s really difficult to not be impressed with the sheer amount of things going on once you’ve sent your ball into the fray.

Generally the formula is simple: you have one shot to hit the ball and destroy enough things to activate your Smashbreaker power; what this amounts to is your ball transforming into a bouncing ball of fiery death, which you guide around clumsily in slow motion to try and break even more stuff with which to increase your score. This time is unfortunately finite, as trying to break everything is probably the most fun part of the game. Once your Smashbreaker time has run out you have to putt out to finish the hole, sink it, and you’re done. Trickshot it by banking it off the wall (or even the screen in a fourth wall breaking putt) and you get extra money, but miss and you’ll be looking at a 50% reduction in your score. All-in-all it’s incredibly simple. Things get changed up as you go along and you’ll come across hazards, which if hit, will cause you to immediately fail the hole, so you’ll need to identify by holding down the hint button; this can also be used to identify high value items that if you hit all of them you get a Smashdown score bonus. As such, making use of each hole’s pre-event fly-by is imperative for identifying high value items, hazards, short cuts, and best paths to ensure maximum points and a relatively safe route to the final flag.

Other hole variants will see you trying to cause as much damage as possible before the ball touches the floor, planting bombs to cause more damage, putt sequential holes when holing out to score higher points, and a putting challenge that gives you three lives to rack up as many putts as possible before the time or your lives run out. Couple this with being able to play the main world tour in co-op or the party mode which sees you taking it in turns to play holes on a playlist (of up to nine holes) and you have some variety here, but it never really feels like enough.

It’s a small game from a small team (eleven people if I recall correctly), and the real world style rooms that each challenge occurs in tend to feel like they’re holding the chaos back. Burnout’s Crash Mode saw you causing cars and tankers to explode, here you’re breaking plates and squashing tomatoes and, despite the quantity of items, the destruction on offer just doesn’t feel like the same sort of scale, it all just feels a little muted and dull. Each hole’s Smashbreaker varies in length as well, meaning that just as you’re getting the hang of guiding the ball around the current hole it’ll end leaving you with a terribly tricky putt to finish the hole. Some of the physics don’t make sense either, ricochet angles will go off in completely bizarre directions, and what items do and do not break comes across as odd. Statues and urinals will shatter and crumble, paint cans spill their load, and while some plates will shatter others will bounce. Champagne bottles will pop spraying their delicious fluid everywhere with some incredibly convincing liquid physics, but the bottles themselves remain intact at all times; considering the amount of objects at any one time can be in the hundreds it’s no surprise concessions needed to be made, but it’s a little jarring, even for a game where the ball can be turned into a flaming ball of death.

As a score-attack game Dangerous Golf just feels a little lacking, it seems many of my friends list don’t have the game, as I was frequently posting the first score, showcasing a lack of global leaderboards to encourage competitive destruction; you can play online, but not including global leaderboards on the solo campaign just seems like a terribly odd decision and one that robs the game of that ‘Just one more go!’ feeling.

While certainly an impressive technical showcase, Dangerous Golf just doesn’t do enough to hold your attention. The whizzbangs and crashes the game is built around are initially impressive but quickly grow tiresome. This is an obvious labour of love for Three Fields entertainment and it certainly has me hopeful for their future output.

Very impressive tech
Can be fun

For a score attack game Dangerous Golf lacks the ingredient to make you want to perfect it.

Danger Zone brings Burnout’s Crash Mode back to us, today