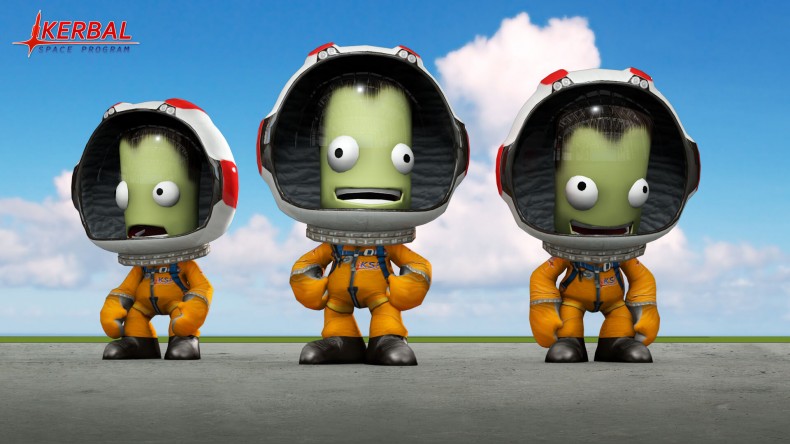 Kerbal Space Program is a rare game, one that can utterly and completely capture your imagination or leave you cold at the impenetrable nature of it. It is a game that you will fail endlessly at, over and over and over again, but if it gets its hooks into you, you will be drawn back time and time again. It’s a game that can make you feel both equal parts incredibly stupid and incredibly clever because, after all, this is rocket science we are talking about.

The incredibly popular space flight simulator that has been in Steam’s Early Access programme since 2011 now finds its way onto consoles. Its PC roots are very clear in the control scheme, and it is unfortunate that these have not been ported all that well over to a controller. The interface is clearly designed for keyboard and mouse and the multiple key bindings require a real feat of memory to learn You are in charge of a burgeoning space program set on the planet of Kerbin. Your task is to commit to, design, and fulfill the stellar ambitions of the adorable and clueless Kerbals that inhabit the planet. You have three ways you can do this: Career; Science, and Sandbox mode. Sandbox is fairly self-explanatory in that you can design and build anything you wish. Want to just build ridiculous machines to see if they will fly, then have at it. All materials are available to you right from the start and you are free to create and try virtually anything. The other two modes (Science and Career) are fairly similar. Science mode requires you to conduct research in order to unlock further parts along an upgrade tree and in turn allow you to create more complex spacecraft for orbiting the planet Kerbin, landing on the Mun, or exploring the rest of the solar system, in this mode you are not constrained by budgetary concerns. Career is perhaps the strongest mode and the one where the most fun can be had. Here you are expected to manage all aspects of the space program, from funding, to research and development, to recruitment of Kerbals for astronaut duty as well as choosing a path along the upgrade tree utilising the scientific research from all aspects of the program to allow access to more parts for more complex craft.

You are welcome to jump into any one of these modes right from the start, but since Kerbal Space Program is a physics based simulator, utilising Newtonian physics laws as well being overly clumsy to control, you are highly recommended to go through the tutorials that are very well presented and give a good basic understanding of each section you will need to comprehend in order to create viable craft that will be able to exit the atmosphere of Kerbin – and more importantly return safely back on terra firma. To compound the knowledge you gain through the tutorials there is also a scenarios mode which will give you a safe space in which to practice what you have already learned without blowing your budget in career mode.

Kerbal Space Program is an incredibly difficult game to understand and master. It won’t appeal to everyone as there is a considerable amount to remember and apply. But if you do persist it has one of the best feedback loops of trial and error I have ever experienced in a game. When you finally create a rocket that leaves the planet’s atmosphere and you make a successful orbit of the planet, then return it safely back to the ground, it is an unbelievable sense of achievement. But more than that lofty goal, each milestone you complete is a thrill, a feeling that you have actually learned something. I feel smarter for playing the game. It’s a shame, then, that it is a fairly poor port. I’ve already touched on the control scheme that hasn’t been ported over to controller very intuitively. The same can be said of the default text which is tiny. You can of course increase this, but it seems indicative to me that the default being so small is an indication of the attention to detail with the port. I feel churlish for saying that, as Kerbal Space Program is an unbelievably detailed and nuanced game, but this is an unusual game that will appeal to a very limited audience and the impenetrable nature of the presentation will not do anything to encourage players who are intrigued to play it, but not sure if they will like it or not. It also crashes a lot. I lost count of the amount of times the framerate dropped or the game actually froze, forcing me to reboot entirely and lose the research I had gathered on a successful mission. In a game that is priced in the way it is, it’s unacceptable.

I hope that some of the issues I have highlighted here will be eventually patched out as underneath these issues Kerbal Space Program is a brilliant game. It’s detailed, it’s complex and there is a genuine thrill in the achievement of each task. I’ve not even touched on the presentation of the Kerbals themselves who are hilarious and lend a real sense of charm to everything you do, but at present the buggy nature of the game coupled with the seemingly impenetrable nature of the game’s controls will only appeal to the most persistent of players. It’s a shame because it really does deserve to be played.

Kerbal Space Program is a rare game, an unbelievably good simulator that unfortunately suffers from a being a fairly poor port from PC to console.

Kerbal Space Program has been acquired by Take-Two Interactive