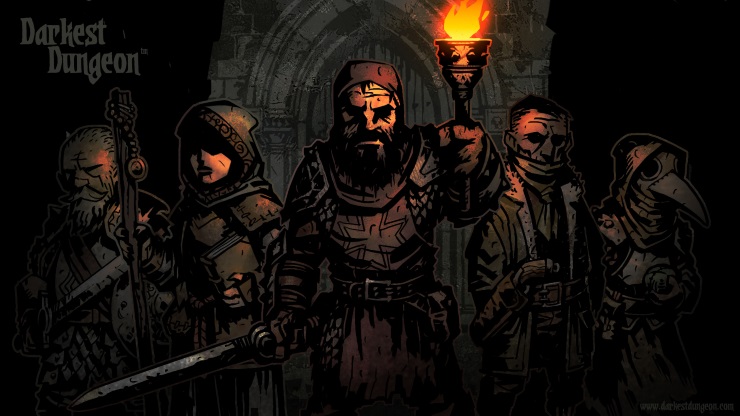 For many months now I have sent them into the unholy dirt beneath my ancestral home, an endless tide of filth and evil marching ceaselessly towards them from the deepest, darkest reaches of hell. How many men have I lost? How many have I watched lose their minds entirely? But I must press on, there is a terrible wrong to be put right, I must restore honour to my family name. And if it is to cost these people their lives, their sanity? So be it.

What effect does the endless terror and violence involved in a life of adventuring have on the men, women and abominations who take up the challenge?

A roguelike dungeon crawler from indie developer Red Hook Studios, Darkest Dungeon reinvigorates the genre by forcing players to deal not just with the regular busywork of commanding bands of heroes, maintaining supplies, health, upgrading armour, weapons, and skills, but also the effects all of this violence has on the minds of the characters you plunge into the darkness below your ancestral home. Darkest Dungeon’s central hook is stress. It’s ever-present, constantly building, battering your expanding roster of adventurers with a plethora of debilitating mental maladies. As you progress through dungeons, each of the four heroes that make up your party will surely and steadily fill up their stress meters, be it through straightforward battle, the spells of an eldritch occultist, or simply walking through corridor after stinking corridor in total darkness. When a stress meter is maxed out that character becomes afflicted, a state which manifests itself in the form of random behaviours and stat changes. Afflicted characters increase the stress levels of your entire party and cause disruption through all manner of alarming behaviour.
On one occasion, one of my party, Medley, a journeyman suffering from hopelessness, started refusing to take his turn, reducing the opportunities I had to attack the enemy, he also repeatedly stabbed himself and then refused healing, throwing my plans off balance at every opportunity and feeding into what makes Darkest Dungeon so special: you can never be in complete control.

The Darkest Estate, the hamlet that you return to in between sorties has all the usual establishments you’d expect to find in this type of game, a guild for upgrading your skills, a blacksmith for strengthening weapons and armour, and a stage coach from which to hire new meat for the grinder. However, it adds to the generic template with an Abbey, Tavern and Sanatorium, places of refuge and respite, essential in healing the mental torment of your roster of fighters. Each character class, there are fourteen in total here, and indeed each individual hero, requires different forms of treatment in order to get themselves mentally fit to return to battle. My kleptomaniac Knight Reynauld; after returning from a raid where he’s stolen most of the loot for himself (denying me its benefits), shuns the all-night boozing, gambling, and whoring at the local tavern in favour of throwing himself to his knees on the transept of the Abbey, praying to a higher power for strength and guidance. Pointel, my paranoiac plague doctor, requires night after night of hard drinking to counteract stress, and Tessel, my apprentice vestal, favours flagellation in the penance hall, lest her sacred fire go out.

Over time, if left unchecked, negative character quirks inherited through battle will become severe, requiring more expensive treatment in the town’s sanatorium. It is here that you may also reinforce the positive character quirks that emerge through battle; it is therefore an essential and demanding part of ensuring success that you constantly rotate your heroes in their favoured stress-relieving pastime. Committing a hero to an activity doesn’t just cost you valuable gold; it also locks them into that activity for a set amount of time forcing you to constantly juggle your roster of fighters.

Even more frustrating is that some of your assembled team will refuse to work alongside each other, for example Tessel absolutely refuses to be on the same party as Dupasquier, my seeker abomination. At every turn Darkest Dungeon plays with and wrestles away the amount of control you are used to having in a game of this type. Spending your hard earned treasures must be thought about carefully. You’ll want to upgrade weapons and skills quickly in order to put up a better fight against the pig-men, shamble tentacles, fungal scratchers, and ectoplasm, but must take into consideration the all-important costs of recuperation as well as the essential provisions you’ll require for even the most basic trip into the dungeons. You are always teetering on the brink of financial and mental ruin, especially early on in the game.

All of this leads inevitably to you being forced, against your better judgement, to go on quests for much-needed treasures with stressed out characters on the verge of total nervous breakdowns and heart attacks and not even enough gold to provide essential provisions such as food and torches. It is here that Darkest Dungeon excels in creating situations from which beautiful stories emerge, stories that you’ll remember long after you’ve put the game down, hard-fought victories in the face of overwhelming odds, unexpected death and annihilation wait around every corner in this game. Alongside the stress system and all of its offshoots there is also a light mechanic to take into consideration. As you progress, light (shown in a meter at the top centre of your screen) will fade, you will need to buy or find torches in order to keep areas well lit. The darker it gets the harder, but more rewarding, things become. Darkness boosts the rate at which party members get stressed and increases enemy attack accuracy but it also has the benefit of increased loot drops and player attack stats, so, if you’re feeling brave or are in a particularly desperate state of financial affairs, you can go for maximum rewards by selfishly plunging your team into a really difficult battle through the darkness.

And this is something, as you progress through the game, you will start to do more and more: sacrificing the lives and minds of your heroes to serve your own ends, eventually finding you’ve turned into the self-same monster that landed you here in the first place.

All of this madness, terror, and death is presented beautifully through stylish graphics, superb music, and a top class bit of narration from Wayne June as the disembodied voice of your fame-seeking ancestor, a turn which adds weight to the pretty cracking story, the full extent of which you will eventually uncover if you ever make it as far as the titular darkest dungeon. From start to gloriously deranged finish, this is a beautiful, distinctive, lunatic of a game.

Can be extremely punishing .
Repetitive trips through the same levels can become frustrating.
Haunted pig-men will vomit tapeworm at you.

Darkest Dungeon is one of the most atmospheric games I’ve played in a very long time, it nails its core concept and delivers an exceptionally well-crafted and interesting dungeon crawler that will take you hundreds of terrifying hours to see through to its ludicrous ending.