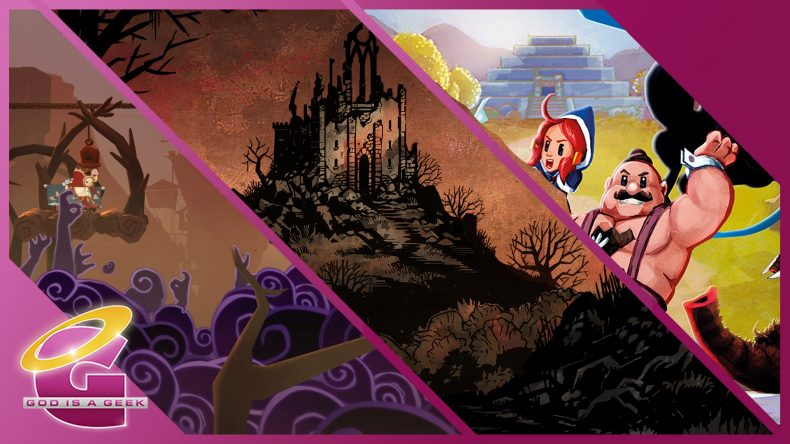 It’s time for round 3 of the Re:Port series, and today, we have reviews on lots of different genres. We have Shu (Gary Bailey), Stick it to the Man, Volgarr the Viking, Darkest Dungeon (all from Mikhail Madnani), and Word to the West (Dan Murphy). Sit down, chill out, and read our thoughts on them all. Shu is a strange one. I reviewed it on PS4 a little over a year ago and although I enjoyed its particular brand of fast-paced platforming at the time, I was quickly reminded of its flaws when I began playing it again on Switch.

But first, it’s still an absolutely gorgeously presented game. Its visuals mix 2D sprites and 3D backgrounds with wonderful results, running smooth as silk both docked and in handheld on Switch. The movement controls are simple but a little irritating at times, leading to some unfair deaths.

Oh yes, you will die a lot in Shu. As you’re trying to save the avian people from the bubbling mass of grinning darkness that chases you periodically throughout levels, you’ll often be given too little time to react to forced direction changes and death will come swiftly. Once you factor in the other characters that allow you to manipulate the environment, each with their own button presses that you’ll need to remember, things get a bit confusing and finicky when you really need them to be simplified.

Unfortunately, the more zoomed-out nature of the camera in Shu will mean that playing in handheld is a lot more difficult than on a big screen. It’s very difficult to make out obstacles at times on that small Switch screen.

All these flaws came rushing back to me as I played Shu again on Switch. There are times where you’ll love the flow of the levels and the tension of the darkness chases, but sometimes those moments will be clouded by the horrors of the frustrating level design and unnecessarily brutal difficulty.

Stick It to the Man
Originally released on PlayStation 4, PlayStation 3, PlayStation Vita, PC platforms, Xbox One, and Wii U.
Scored 7/10 when reviewed on PS3 on November 11, 2013. Stick It to the Man is a game that has seen ports to multiple platforms. In fact, it is basically available on almost everything today and was the game that got Zoink on the map for me. I originally played this on PS4 and quite liked it. The game has now been brought to the Switch and it is a good port. If you aren’t familiar with it, Stick It to the Man is like an old adventure game with platforming sections and hit or miss humour. I enjoyed the humour and that bit in conjunction with the distinct visual style has made this a memorable experience. There are of course some adventure game quirks like items making no sense at first. The title menu music is superb and deserves a special mention.

On the Switch, Stick It to the Man plays great in both handheld and docked modes. There’s a nice implementation of HD rumble as well for when you’re reading minds or just as a replacement for normal vibration when you’re spaghetti braining your way around. I was hoping the performance was a bit better in docked. This is being picky, but I prefer games having a lower but locked frame rate over a higher frame rate with slight fluctuations or pacing issues. On handheld the only real complaint is the lack of better anti aliasing. This is another minor complaint and this is still a joy to play in handheld mode. If you’ve never played it, the humour might be a turn off for some, but this is a nice experience with some interesting mechanics. Crazy Vikings Studios’ action platformer Volgarr the Viking is something I’d heard of multiple times. People always told me it was a super difficult game that had elements from Ghosts n Goblins, Castlevania, and more. You play as Volgarr and the game wastes no time in basically telling you to get going. The spear mechanic is brilliant because outside of being a regular and charged attack, you use spears to create temporary platforms to access more areas. Unlike some of the better old school games in this vein like Tiny Barbarian DX, Volgarr has a poorly thought out checkpoint system.

The Switch port is great in handheld mode. In fact, that seems to be a trend with many indie releases where they focus on the handheld aspect and the docked output is sub native. Volgarr could look sharper docked but there hasn’t been a patch to address this since launch. On handheld it looks great and plays well. Volgarr in general feels like a recreation of a very old game with some modern mechanics added for a fun experience. It will take you a ton of effort to get the best ending though. As with many indies like Stardew Valley and Rocket League, I ended up buying Darkest Dungeon on Steam, PlayStation, and iPad. It is a fantastic and well polished but beyond difficult initially roguelike RPG with turn based combat. I’ve put in the most time on Vita and iPad across all platforms and was excited to finally play this on the Switch. The release here also has DLC available at launch sold separately.

Having already played the game on a handheld, a console, and iPad since the Steam release, it has been interesting seeing the control scheme that was originally developed for mouse and keyboard adapted. The Switch supports the touch controls of the iPad and the traditional controls of the PS4 release together. This makes it the best version for me in handheld by far. The controls will take some time getting used to if you’ve played it on PC or just haven’t played it before but the effort is worth it. I constantly use a combination of Joy-Con controls and touch controls here. The only issue I have with the controls is how touch is handled causing some tooltips to show up below your thumb or finger depending on how you touch the point in question

Visually, docked mode is disappointing. I was hoping for a native presentation, but it looks to be lower and probably suffers from the same issue many ports have where handheld and docked resolution is the same despite docked allowing for close to 5 times more power. There’s a lot of reading here and with a lower resolution, this becomes a bit more annoying. In handheld, I had no trouble with the text although some people might find it a bit small. I hope future patches add scaling for the text in handheld and better image quality docked because this is the definitive version for me in handheld form for sure. Darkest Dungeon is a game that makes you learn a lot from both your mistakes and from yourself.

Word to the West
Originally released on PC in May 2017 With a simple, cute art style and a soundtrack you can lose yourself bobbing your head to, World to the West seems as though it’ll be a nice little action-adventure game. Yet, while it’s certainly playable, I found it to be a little dull and obtuse.

World to the West sees four different characters all from different walks of life come together to put a halt to an evil plan. But before we get to the shenanigans we start off with a bit of back story for each character, as we learn their abilities, then gradually they are brought together, as they require one another to progress. It isn’t exactly the most ground breaking of structures in the world but it works well, and the different abilities blend well together. A small fella who can dig holes, a teleporter from a different world, a treasure hunter who can mind control enemies and a classic strongman, moustache and all. The four characters work nicely both with their powers and the sharp writing, humorous writing as their personalities clash.

Despite this, however, I found the puzzles throughout to either be very simplistic or needlessly obtuse, especially when they dealt with a character having to reach an area where another one is. Unlike in most games of this style, you can’t just swap characters on the fly, you have to go to a totem and select them and the character you choose will be where you left it. While I appreciate trying something new, I just found this to be a bit annoying.

Regardless, World to the West is a charming, pleasant game that’s nice to play but won’t hold your attention for all that long.