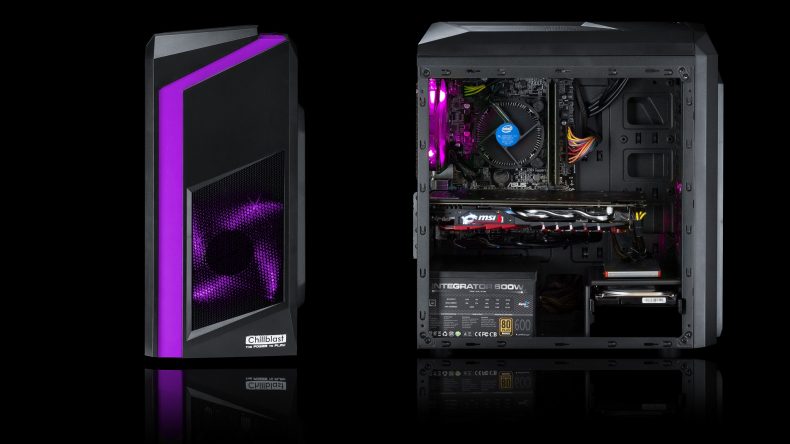 PC gaming isn’t as easy as it used to be. I spent the longest time searching for a new PC that would run nicely on my 1080p TV for a reasonable price. But where do you start? Do you want an Athlon, a Ryzen or an Intel processor? A Radeon or nVidia graphics card? How much RAM do you need and do you want DDR3 or DDR4? It’s easy to get lost. Luckily, Chillblast may have the answer.

The Fusion Arrow 2 is reasonably priced but the power you get, especially if you’re going for a solid 1080p experience, is extraordinary. It runs with an Intel Core i5-8400 Coffee Lake processor, with six cores running at between 2.8GHz and 4.0GHz (faster than many 7th Generation 4GHz i7 processors, in case you were wondering why people struggle to make any sense of PC specs): more than enough to tackle any games for the foreseeable future.

This is backed up by a 3GB nVidia GeForce GTX 1060 graphics card, easily capable of handling any games thrown at it. For example, The Witcher 3: Wild Hunt runs at 50-60 frames per second in 1080p with settings ranging from high to ultra (plus those flowing Geralt locks powered by nVidia’s HairWorks), which is better than even the patched PS4 Pro version and looks much more detailed. Project CARS 2 runs at max settings, again in 1080p (I don’t need to say that again, do I? You know the resolution by now) and hits a rock solid 60fps throughout. Same goes for Dark Souls 3. Even Forza Horizon 3, notorious for being a bit of a system hog, runs at a near constant 60fps with high settings, or around 50-55fps at max settings. With Xbox Play Anywhere, it could even render my Xbox One pointless as far as exclusives go.

The only thing that really lets the system down, is that it only has 8GB of RAM. However, it being DDR4 2400MHz, it’s still very impressive. Plus, there are two more slots in the Gigabyte Z370M D3H motherboard to add more RAM at a later date, possibly to go with the idea of adding a VR headset to my setup when I have more room to do so.

Although the raw power is appreciated, it’s also just a well-built PC that is easy to use. The Chillblast Fusion Arrow 2 is versatile, with ten USB ports, three of them located on the top of the tower that are ideal for plugging in a mouse and keyboard, possibly even a control pad for gaming. With the extra ports on the back, you could have various other devices plugged in too. My headset remains connected at all times, and I can plug in my microphone should I want to record a podcast or some gaming commentary. The GTX 1060 comes with the option of DVI or HDMI output, allowing you to plug it directly into most TVs as well as any modern monitors.

If you’re after decent storage, the 1TB hard drive offers plenty of room for your games and apps. It’s quick, too, loading things up with minimal waiting. On the topic of speed, the 250GB solid state drive (SSD) boots up the included Windows 10 Home operating system lightning fast; my Xbox One takes twice that time, without using its ‘instant-on’ setting. Be warned though, there is no disc drive on this machine, but then again, with physical PC games being a rarity these days (even then, some of them are just a download code in a DVD case) and most people using streaming services for their viewing pleasure, no disc drive isn’t a big deal.

You might be worried that all this power might come with the price of it sounding like a jet engine, but even with its various fans keeping it cool while running something like The Witcher 3, it’s extremely quiet. When it’s running simple software, such as while I write this review, it’s barely audible at all. It hasn’t even been warm to the touch, due to being so efficiently ventilated. It’s also very easy on the eyes as well as the ears, with its cool white and black angular case making it look like something out of a sci-fi movie, complete with subtle blue lighting from within. I’m a sucker for blue lighting. It’s not big and bulky either, but it is spacious inside, leaving room for future upgrades.

It’s hard not to be impressed by the Chillblast Fusion Arrow 2, not just because it has handled everything I’ve thrown at it with great efficiency and at high detail, but because it is remarkably well built. With its quiet running, small size and sheer number of USB ports (plus SD card slots), it’s great for anyone wanting a PC for their living room. It’s not cheap, but it’s well priced for what it achieves, but everything about its performance is high-end, and aside from a simple memory upgrade, it will last a good while.

Check out the prices at Chillblast.
Liked it? Take a second to support GodisaGeek.com on Patreon!

Whisper quiet, but well ventilated
SSD means it boots up super fast
Runs demanding games at 1080p at high-to-ultra settings, with high framerates
10 USB ports, 3 of them on the top for ease of access

If you’re in the market for a powerful 1080p machine, the quiet and efficient Chillblast Fusion Arrow 2 is more than a match for almost anything thrown at it. Considering everything under its hood and the exceptional build quality, it also comes with a reasonable price tag.