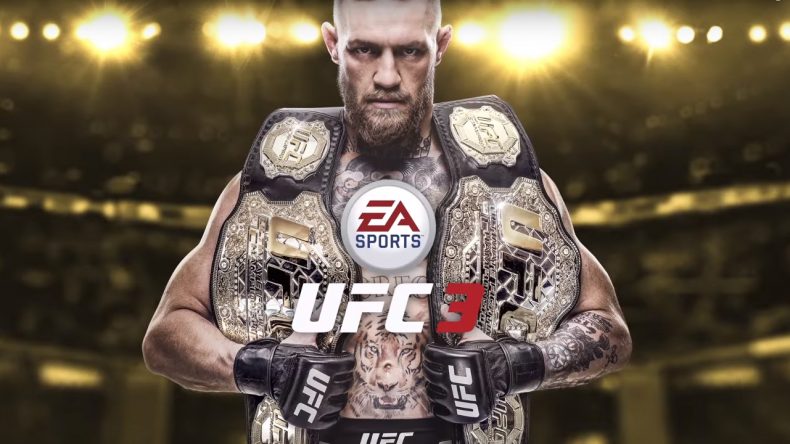 The announcement to make a new UFC game took many by surprise, especially as the gap between the first and second was so large, but, as they say, strike while the iron’s hot, EA know it has a strong franchise and is ready to build upon it. UFC 3 is a step forward. The fighting is impeccable, as every match is fluid, realistic, and exciting. Whilst the career mode is still not quite perfect, there’s still a great sense of achievement and disappointment real UFC fighters must feel as they progress through the ranks.

Fighting in UFC 3 has certainly set a benchmark, with every fight a new challenge. There are so many different styles in the UFC, and depending on who you fight, your strategy needs to change. It certainly helps you if you know what fighters are like in real life as you’ll have an idea of what their strengths and weaknesses are, but you can never be fully ready until you’re in the Octagon with them, staring them right in the eyes. EA has implemented Real Player Motion that has revolutionised MMA in video games, giving every fighter their own unique style.

Fighters known for their ground work will find every opportunity to take you to the mat, whilst strikers will land massive blows that knock you off guard and force you into the side of the cage with little chance of making it out alive. Everything from the footwork to the speed of which they move looks incredible, every little detail in place to make the fight feel fluid. No fight I had felt the same, even when I was fighting the same opponent for a second time.

Striking is so satisfying, making flurries of jabs and hooks, or uppercuts and signature moves affect your opponent in lots of different ways. I would try and start off figuring my opponent out with some light combos, then when their guard was lowered, I’d go for massive kicks to the head. When you’ve perfected the distance and opportunity to strike, there’s nothing quite like a knockdown, or even a stun where your opponent wobbles, then Joe Rogan shares his excitement over the commentary. Blocking has been altered so that it’s more accessible, but you can still be caught off guard, as well as stronger fighters being able to break your defence. Grappling always feels difficult to block or break, as timing needs to be so precise. So many times you’ll struggle to stay on your feet, but when it’s you taking them down, the sound of them slamming into the mat does wonders for your confidence. When you’re on the mat, it can be tough to get in a decent position as the AI is very strong, whether you’re trying to wriggle out of a sprawl or a top mount. Using the right trigger and moving in the direction of your opponent can block their movement, and you can hold it down to grab onto them and restrict their next move. This is less of a criticism and more about learning curves, because you do learn – a lot.

The bane of UFC 3 is the submissions. Whenever I found myself stuck in an arm bar or a Kimura lock, I just couldn’t get out. A mini game pops up where you must use the right stick to move up, down, left, or right, but your opponent can also move their stick in your direction. If they match your direction, they stop you breaking the submission, and too often, they reacted so quickly that I could never get out, causing my first loss at the hands of Cain Velasquez. It feels much tougher to break than UFC 2 regardless of the opposition, causing some frustrating ends to fights that never get any easier to accept. Still, when the shoe is on the other foot, making someone tap highlights all the hard work you’ve taken to learn about the groundwork. It’s a double-edged sword.

UFC 3 has updated the career mode and made it so much better, but it still feels like it’s not quite there. You must become the G.O.A.T. by completing certain challenges like gaining 5 million followers on social media or winning 21 UFC fights. Gone are the archaic training scenarios as featured in old Fight Night games, and a more streamlined process features now. Between fights, you get to choose the number of weeks you have to prepare. By winning more fights and gaining more money, you can pay for better gyms, meaning better training programs. To train, you simply click on a type of training, such as mat work or weights, and you click on it to complete. No loading screens, no time wasting, and it takes a second to do it. You spend a hundred points every week of training, and each type of training has a certain value, ranging from 10 to 35 points. Occasionally you can pick up minor injuries or wear and tear, but the option to heal is there, and it’ll cost you 70 of your points so spending wisely is key. The option to heal is found in the promotion page of the weekly preparations, as well as partaking in photo shoots, radio interviews, TV appearances, and games streaming a la Demetrius Johnson, but again, they’re text you’ll click on to do so instead of getting to see any animations or cutscenes just like the training. This’ll build hype for your fight, meaning more money and fans to acquire.

As well as training and promotion, you can spar which lets you fight an opponent that’ll mimic your next opponent, so you can see what you’re up against, and there are also challenges you can complete for 40 points that will give you new perks and moves to equip. Unlocking special moves will give you a huge edge in a fight, so it’s necessary to spend time there if you want to be the best. Whatever you do in your preparation for your next opponent will impact you greatly. Spend too much time promoting and your fitness will be low, or train too hard without relaxing means there’s a greater chance of injury. It all depends on how you want to be regarded in the Octagon.

One of the pulls for me was how the trailer showed press conferences and weigh-ins, and how it appeared you’d get to participate in rivalries. Unfortunately, this is where the career mode is most disappointing. You will start off in the World Fighting Alliance, then earn a UFC contract if you’re successful. The better you do, the better the contract, leading to title fights against the top dog in your weight class. The problem is that you’ll interact with a ‘rival’, then you’ll not really see them again until Megan Olivi presents a generic episode of UFC Minute where you’re not really mentioned by name, or even nickname. In these cutscenes, you’ll see you and your opponent at the public appearances, but you never get to interact with them. It doesn’t feel authentic, and it’s a bit of a shame. You may see them pop up in a few fights before you face them, but it’ll only be to answer a question they pose to you or statement they make, where you get to respond in a text-based format. However, UFC 3 has started to rebuild the career mode, and hopefully by the next one this’ll have been upgrading to make rivalries and more feel a bit better. There are some cool features during your career, such as the Tweets after matches featuring gifs of your knockouts or submissions, and the risk versus reward in actual matches affecting the longevity of your career. For example, if you take a battering your career length will be greatly reduced, but if you knock your opponent out within the first 20 seconds of a bout, the damage is minimal, and you’ll not suffer any risk to your career’s length.

Elsewhere, the Ultimate Team feels like before, but you can now play as UFC fighters as well as your customised creations, and there’re plenty of moves to unlock, solo challenges to give you more to spend, and the ability to build sets for your characters that’ll give you better stats and rarer equipment. Knockout mode is back, as well as other fun modes like Stand and Bang, and multiplayer adds more excitement to fighting because you have no idea how the opposing fighter is going to challenge you.

The overall presentation is phenomenal, as each fighter moves like they do in real life, and celebrations are all authentic. Derrick Lewis drops to the floor and pounds the ground, whilst Conor McGregor swaggers around the Octagon in his flamboyant and arrogant style. Even the facial features look familiar to their real-life counterparts. The commentary is often great, but there’s plenty of repetition. I mean, if you were to take a shot of vodka every time they said ‘baddest man on the planet’, you’d probably be drunk by the end of round 2.

UFC 3 offers the best MMA experience to date, and whilst the career mode isn’t quite there, it’s still great to play, and the RPM makes every single fight thrilling and versatile and getting the all-important knockdown is one of the most satisfying experiences you can have in a video game. It’s about as complete an experience as it can be, and MMA fans will love what EA has done with UFC 3.

Career mode suffers outside the Octagon
Submissions are frustrating

It’s about as complete an experience as it can be, and MMA fans will love what EA has done with UFC 3.