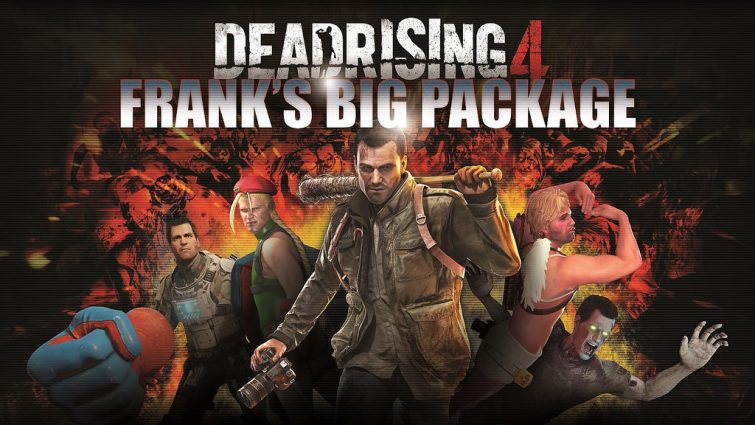 There’s a strong concentration of zombie games coming out towards the end of 2017, with the likes of Resident Evil Revelations 1 & 2 on the Switch, and The Walking Dead Collection seeing the light of day before the year’s out. Maybe it’s because zombies love Santa, or maybe it’s because they all make decent Christmas presents – who knows? There’s one more title that’s here to entice shoppers to buy for their morbid loved ones, and that game is Dead Rising 4, finally here on the PS4 in the form of Frank’s Big Package. Regardless of the cheeky title, it’s filled with loads of great content, including a new game mode, loads of costumes, and even more crazy as hell weapons to use on the thousands of zombies.

For those of you hoping for an overhaul of Dead Rising’s tried and tested formula, you may be disappointed, however, if you crave a return to Wilamette and the opportunity to step into the shoes of Capcom’s version of Bruce Campbell once more, it’s a lot of fun despite its repetition after a while. 16 years after the original incident at the Wilametter Mall, Frank’s back to uncover the secrets of a government conspiracy, taking on hordes of zombies, as well as a former student who betrayed him. Like most of the Dead Rising stories, it’s pretty dreary, but the writing is on point, delivering some great humour and wit just when you’re growing tired of its plot.

From the very beginning, Dead Rising hasn’t taken itself seriously, and as the series progressed, Capcom became more ambitious, crazy, and creative when it came to the weapons and costumes you can use. In Frank’s Big Package, it’s bat shit crazy; there are crossbows that fire fireworks and candy canes, and huge fists that can punch the living (and dead) hell out of your enemies. There are also EXO Suits that dish out huge amounts of power, vehicles that can be combined to create devastating death traps, and loads more than help to make DR4 feel more like an all-out action game than a claustrophobic horror. The tension is gone, but the excitement manages to replace that feeling wholly. As open worlds go, it’s a colourful and diverse affair inside the mall, but in the outside world it just doesn’t have that spark. Safe Houses all feel repetitive, and some of the side missions are dull, but there are missions that do offer a challenge, especially some of the boss-like encounters. There were some issues with the visuals that caused some janky transitioning between cut scenes and gameplay that came about unnaturally when watching, such as the next section of gameplay popping up for a second before the cut scene meant to preceed it starting after. It doesn’t initiate smoothly, and after a few times it starts to get a bit annoying. Some of the camera work is a bit of a chore as you have to move your point of focus often, meaning fighting hordes of the undead can render many zombies out of sight and difficult to spot.

Frank’s Big Package has a new mode called ‘Capcom Heroes,’ and for saying I thought it’d be a pointless implementation, I was pleasantly surprised. At certain points within the mode you get to choose a selection of Capcom Heroes, such as Cammy from Street Fighter II, X from Mega Man, and Dante from Devil May Cry. You get specific moves that only they can use, so when you’re running around Wilamette as X from Mega Man, you can use your canon to fire a ray of energy at oncoming zombies. Street Fighter’s Cammy became a favourite of mine, mainly because watching Frank let out some fancy kick combos in tights gave me a laugh. It’s a mode that gives you the same story with a bit of nostalgia thrown in, and I enjoyed it quite a lot. There are tons of costumes to buy from vendors, and certain ones alreay exist in your inventory, such as Santa Claus, and M. Bison and Guile from Street Fighter II. There are loads of weapons available to purchase, and Super Ultra Dead Rising 4 Mini Golf and Frank Rising are here, giving you whole new ways to experience the game. Who doesn’t love mini golf after all? And as for Frank Rising, it’s fun to see the shoe on the other foot, with the game’s hero hunting for blood and flesh as opposed to that perfect picture.

The photo mode is frustrating at times as much as it’s fun; when investigating certain scenes, it slows the pace down quite a bit, and doesn’t always feel like it needs to be there. However, the challenge for taking the perfect picture is back, with all your shots being graded just like before. Also, you can take selfies with zombies! Yep, got the perfect shot but feel like a bloodthirsty zombie would make the scene perfect? Just grab one and click away.

Dead Rising 4: Frank’s Big Package is the same Dead Rising 4 game but on PS4 and featuring all of the previously released DLC. The Capcom Heores mode is a nice distraction, and the base game is fun, although the constant slaying does get repetitive if you aren’t into mixing up your forms of attack. There are some visual issues when transitioning between cutscenes and gameplay, but mainly it performs well on the PlayStation 4. It’s the perfect game to wind down to, not think about anything to intensely, and play because it’s great killing zombies in a hundred different ways.

It's certainly the best version of the game to buy, and Capcom Heores is fun, but their are some technical issues, and it does make you wonder just how many more games Capcom can get from a fading franchise.