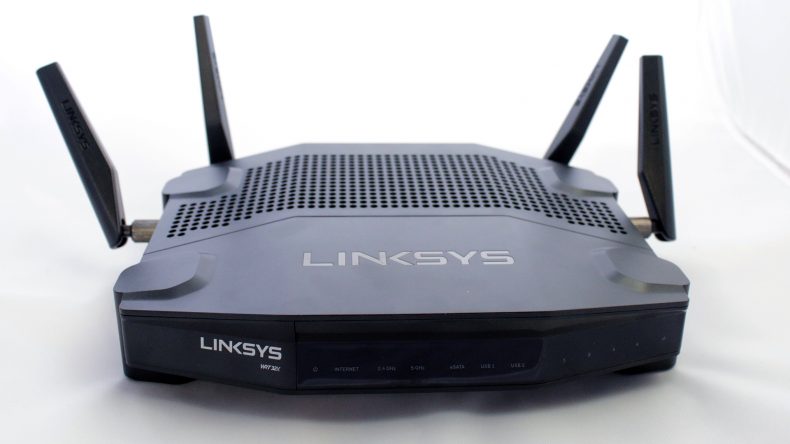 For the gamers among us that play online a fair bit, it’s relatively common to encounter lag to some extent, and the smoothness that comes with fast internet can still be interrupted. Lots of companies offer gaming routers, specifically designed for those that spend plenty of time in competitive multiplayer, but are they something worth actually buying? The Linksys WRT 32X is an expensive piece of kit, but it offers some impressive tech to make sure you and your connection to the internet remains strong and consistent, whether you’re mowing down soldiers or engaging in combat with orcs and monsters. The thing is – for it to perform at its best, there’s a slight catch.

The design of the WRT 32X is sleek, smart, and fits on any surface without taking up much room. I got a feeling of nostalgia as it reminds me of my old Linksys router from when I was much younger, something that could be deliberate from the designers. It’s not particularly large, and it’s sturdy when set up; whilst using the router, I had it sat right next to the monitor and you’d barely know it was there. The four antennas are detachable, and can be fitted without any issues if need be. It’s easy to use and doesn’t take long to start using regardless of your familiarity with this type of hardware, as there’s a wizard available to guide you through installation, with a quick set up guide included in the box.

There’s a key feature of the router that will give you a massive advantage over those without, but it feels a bit of a cop out if your PC hasn’t got it. If your PC is equipped with Killer Networking hardware, the WRT 32X’s Killer Prioritization Engine (KPE) will sync up to it and provide a prioritized gaming connection, along with advanced features and enhanced performance. Honestly, I didn’t see a huge improvement to performance, but there’s a definite advantage to using the WRT 32X gaming router, as whilst testing I had zero issues with any lagging. My wife was on the laptop downstairs, and my kids were busy watching weird videos on YouTube Kids. I also had a couple of games downloading onto my PS4 in the living room, but nothing seemed to mess up the connection.

It works well to reduce disconnection and dropping packets, but on the whole it feels like a normal router – a great router, but a normal router nonetheless. For the steep £300 it’s retailing at, I’d shop around for something else if I don’t have the correct hardware on my PC to get the most out of it. Let’s not be too harsh, though. The technology in the router to prioritize gaming traffic is pretty special, and you will notice a difference even if your PC isn’t equipped with the Killer Networking, but my other router manages to provide a decent connection for almost all the time anyway.

As for some of the gaming routers specs, it features many standard issue ports, including a 3.0 USB and a USB 2.0/eSATA port, with 4 GB Ethernet ports to boot. Along with these, it also offers a single Gigabit WAN port, with the whole router being powered by a decent dual-core 1.8 GHz processor. As silly as it sounds, it’s nice having a power button on the back as it’s easier to power down than unplugging and plugging in the power cables like other routers out there.

The Linksys WRT 32X is a great router, marred by its reliance on separate hardware on PCs to get the most out of its performance. Still, I had zero performance issues whilst testing, and the change was noticeable. I just can’t help thinking how much better the KPE would have been if I could have given it what it wanted to make it work the best it could. I guess it all depends on how much you play games online, and how much of an impact drops in performance are to you. If you’re in esports this kind of equipment is a must, but if you’re a casual gamer, maybe find something a little more affordable.