Destiny Expansion One: The Dark Below Review 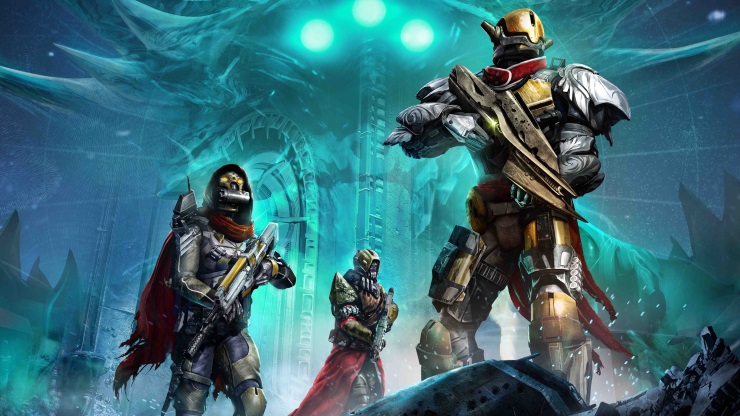 Destiny is a strange beast. Marketed as a “shared world experience” rather than an MMO, its mixture of solo blasting and buddy-up adventuring made it immediately enticing to a generation of FPS gamers who were ready for something more than a six hour campaign followed by endless team deathmatches. Sadly, as I said in my original review, Destiny is a game with massive, epic, mind-blowing potential that simply failed to live up to its own hype. Mechanically, it’s an excellent shooter, but in terms of the looting, levelling and gameworld, it’s sorely lacking.

Alarm bells were ringing when the first player hit the level cap of thirty so soon; when, within just three short months, the once gargantuan undertaking of the Vault of Glass raid became something people just entered to grind materials and farm loot; when Bungie began to artificially extend the lifespan of the meagre vanilla content by intentionally increasing the importance of grinding. People started to get bored. Just twelve weeks after the launch of the most expensive game ever made, of one 2014’s most pre-ordered releases and the most exciting new IP in years, people started to get bored.

Luckily, Bungie had already announced two expansion packs as part of the Season Pass deal, and will be hoping to keep people hooked with the promise of new loot, new missions and new challenges. The first expansion, entitled The Dark Below, focuses on the history of Crota, a Hive god mentioned in several campaign missions. A new vendor at the Tower, Eris Morn, is the last survivor of a raid party that tried to kill Crota several years before, and it is she who seeks out your Guardian and charges them to succeed where she and her comrades failed. This essentially boils down to three story missions that you can solo in around an hour and a half, and then a stack of new bounties from Eris herself. She sells special upgrade gear, sexy new armour shaders and class items, and also offers multi-part missions similar to exotic weapon bounties. Unfortunately, the word “expansion” is a little bit of a misnomer. Destiny doesn’t feel expanded when you install The Dark Below – even with the extra three Crucible maps, there just isn’t enough content here to warrant that label. What’s more, it doesn’t expand on the core narrative of the vanilla game, a plot that already felt rushed and unfinished, with no clear villain and far too many unresolved threads. Instead, The Dark Below stands alone with a new mini storyline, and we’re still left unsatisfied by Destiny’s central plot.

The added Strike (the Will of Crota) is one of the two major additions, and adds a new three-player mission to track down Omnigul, a Hive Wizard who you pursue throughout Eris’ quests. It’s an excellent Strike, in all fairness to Bungie; a frantic, tightly-packed firefight that ends in an enclosed space as Omnigul floats above a central gantry summoning Knghts, Wizards and Thralls to defend her. Uniquely, her shield alternates between Arc and Solar vulnerability, which is handy as the Fusion Rifle that Eris gives you, Murmur, is able to cycle between the two damage types. It’s a solid Strike against a worthy foe, and after so long on the standard playlist it’s liberating to play something new. PlayStation gamers also get The Undying Mind, a Strike on Mars that culminates in a boss fight against a clone of the Nexus Mind. It’s less exciting than The Will of Crota, but it’s still fresh. The second major addition is Crota’s End, a new six-player raid that pits you against the Hive god himself. It’s more action-oriented than the Vault of Glass, with less downtime and more shouting and shooting. Bungie have done well here to make it feel markedly different to the Vault while still maintaining the same sense of camaraderie and onus on teamwork. Once again, in order to reach the new level cap of 32, you will need gear only found in the raid, so if you want to stand with the best, you’ll need to overcome the toughest challenges first. Luckily, class vendors now sell gear that will take you up to 31, making you more than capable of surviving Crota’s End providing you keep your wits about you.

The additions to the Crucible are more slight, introducing three new maps to freshen the experience. Only playable in Clash and Rumble, the new arenas are unexceptional, but welcome – apart from Pantheon. Set in the Black Garden, this symmetrical map is a work of genius, packed wall to wall with tight corners, narrow corridors and suddenly exposed killing grounds that make for some incredible team matches as you dig in and cover corners back-to-back.

Where The Dark Below really goes off at the deep end, however, is in the new loot system. Bungie seem hell-bent on breaking a system that really wasn’t that bad in the first place, having already removed the opportunity to swap resources for Marks and replacing it with the option to swap Marks for resources instead – which is madness, as you can literally pick resources up off the floor, whereas you have to grind for Marks. It’s mind-boggling, but only the tip of the iceberg. To buy new Legendary gear, you’ll now also need to earn “Vanguard Commendations” from your mentor by clearing Vanguard ranks, something that’s easy if you’re at lower levels but which can be a nightmare if you’re already around Rank ten. Bungie have also implemented a way to upgrade existing Exotics to make them useful at level 32: every weekend, Xur has a selection of Exotics that you can pay to upgrade with around 5 to 7,000 glimmer. While this makes glimmer useful for the first time ever, it also slaps everyone in the face who has spent weeks levelling up an Exotic piece, grinding Ascendent materials and resources by making you re-level each upgraded item from scratch. Baring in mind that some of these items can take weeks to fully upgrade, that’s quite a kick in the balls.

The Dark Below feels more like an add-on mission pack than a true expansion. The new content may breath a good eight or so hours of new life into Destiny if you rinse every quest, strike, and bounty, but afterwards all it really does is add more opportunities to grind. The exotic upgrade system is so off-key it’s laughable, while the new missions are far too short and not challenging enough. The new strikes and six-man raid are welcome additions, but even they will pale long before The House of Wolves is released in three months time. It’s nice to play some fresh content, but The Dark Below just doesn’t do enough to reinvigorate Bungie’s grindfest.

A disappointing add-on to a game already losing its lustre. House of Wolves needs to be better than this, or Bungie may find themselves in trouble.