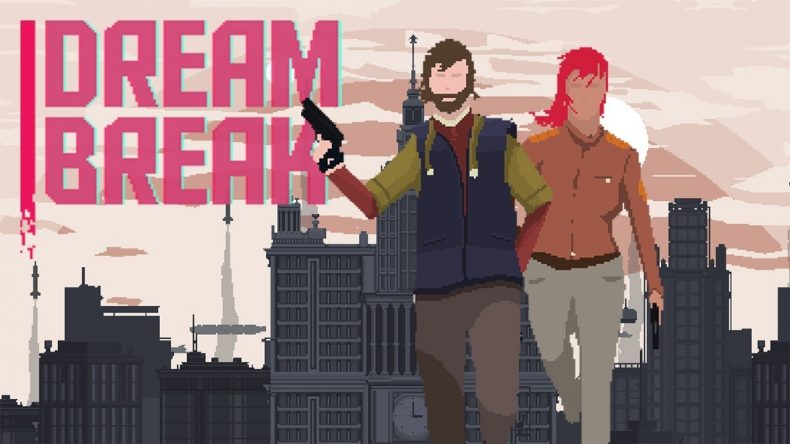 Dream Break is a lot like Flashback, which is at the same time both glorifying and damning. Glorifying because Flashback is a beloved classic among gamers of a certain age, and damning because it’s over 20 years old and Dream Break does nothing to modernise it.

It’s an incredibly short adventure set in an alternate history Russia, in which you play as Eugene, a nightclub handyman drawn into a deadly conspiracy. To be honest I found it hard to connect with the story as it’s told mostly through dialogue and thought processes that aren’t that well written and aren’t all that easy to read. Those with more of a love for retro graphics and pixel art might well find their experience more rewarding. It controls like classic Flashback, and indeed Eugene moves with almost the exact same animations as Conrad Hart (and the same issues with feedback for movements such as jumping and turning), but sadly Dream Break contains none of Flashback’s charm. It’s a fairly by-the-numbers 2D action game that sees you solve rudimentary puzzles to proceed through the mystery.

As you navigate the world, items you can interact with are highlighted in orange, which means you’ll automatically look for the orange stuff and ignore most of everything else. By extension this leads to you backtracking from area to area clicking on the highlighted stuff until you succeed.

Dream Break is a decent enough distraction, but it’s not something you’re going to remember when you’re done. It feels dated as opposed to tributary, and there’s just not enough going on to keep you hooked in. If it was longer, with a little more action and a developing plot, it might be worth checking out, but as it is, it’s really not worth getting excited over.

Has a cool retro look, if you're into that
Evokes Flashback flashbacks

Short
Clunky controls
Not all that gripping