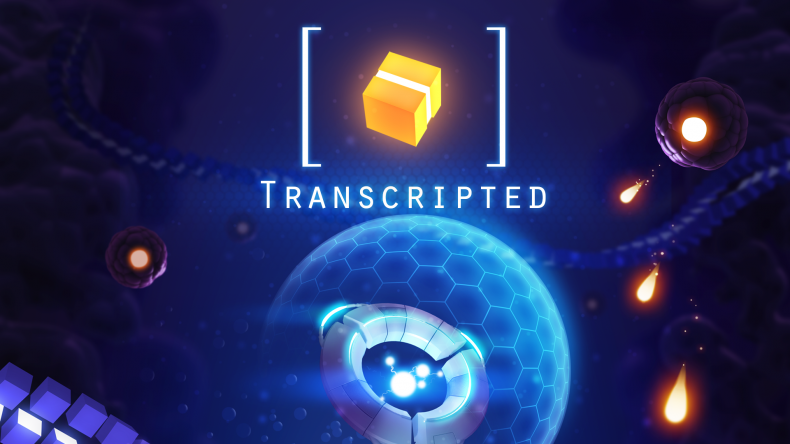 Sometimes a game can have too much story. An action game or RPG, even a shooter, needs that. Context makes the wheels turn, brings the game world to life. While I understand the reasoning behind giving games like Transcripted a story, I also wonder if it does more harm than good.

It’s a twin-stick shooter / match 3 hybrid that does a more than decent job of being either. You control a microscopic drone inside the body of a test subject, and your job is to eradicate a virus by repairing DNA sequences. I think. Essentially you shoot cells to leave behind a coloured block, which you then shoot into a chain of coloured blocks, matching 3 to fill up a meter at the top of the screen.

The mechanics are solid, the controls are responsive and overall it’s a lot of fun. Your drone has a replenishable shield and unlockable weapons to cycle through, further bolstered by collectible power-ups. It’s all par for the genre, but the presentation is impressive and what’s here feels well put-together if not particularly fresh. It can be a genuine challenge to stay alive, and periodic boss fights add another hurdle that only perseverance and concentration will see you over. Between each mission you’ll get the chance to upgrade you skill trees, which is a nice touch, but almost feels like a mechanic too far. I’m not one to complain about skill trees, but simple milestone upgrades would be a better fit for a game about speed and efficiency. Still, it’s another idea they’ve packed in to fatten the package.

However, the big “but” lurking behind all this praise is that the storyline and narrative actually feel intrusive. There’s a plot involving Adam the hacker who pilots the probe, a handler / AI called Nadia, and a shady overlord type who butts in between stages to prattle on with static dialogue on a dull background that does nothing but delay the actual gameplay. It’s hard to care about Adam or his “mission”, partly because he’s such a smart-Alec dick, so it just feels irritating.

It’s also incredibly heavy-handed with the tooltips, repeatedly bombarding you with distracting, flashing pop-ups to clumsily explain every new element. It doesn’t come across as a natural way to learn the mechanics, and succeeds in being just another thing that interrupts the good stuff.

Transcripted is a fun game with some nice ideas, but it'd be far more at home on a tablet or handheld without all the boring dialogue.