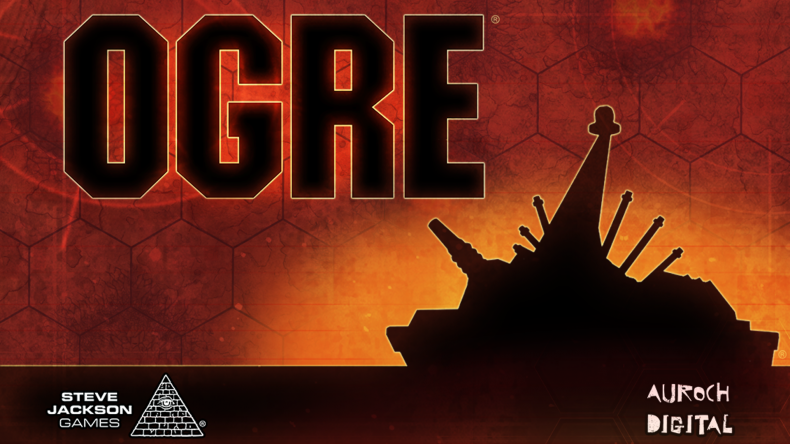 Board games and tabletop games have grown massively in popularity over the last few years, thanks in no small part to some fantastic licence usage and the rise of the Kickstarter. It stands to reason then, that digital versions of these games should now be a thing, especially with the addition of online play for people without the luxury of local groups with whom they can play the physical games.

Ogre was first released back in 1977, pitting a human force against an Ogre; an autonomous war machine gone rogue. The idea was that the Ogre had to take out the human base, with the opposing force using all its strategic knowhow to play the David to the attacking player’s Goliath. This videogame version is much the same, albeit offering some different takes on the original formula. Using a hex layout and a turn-based movement/attack system, Ogre is a fairly simple game to pick up, or at least it would be if the tutorials did their job properly. Most of them give you just enough information about what you’re doing, but the most important one, telling you all about the titular Ogres, only offers one side of the lesson. It purports to teach you how to both attack with, and defend against, Ogre machines. Only it doesn’t get as far as telling you about the defence part. Considering a good portion of the campaign revolves around this defence, it feels like it’s missing a very important part of the game.

Playing the game is simple enough; you start with a movement phase, in which you move all your units around the map, with each one having a limited number of hexagons over which it can travel. After that, you’ll have an attack phase; if any units are within range, you’ll select them and strategically attempt to blast them into oblivion. Or, in the case of the massive Ogre units, you might just be trying to disable them by taking out their treads. After this attack phase, your opponent goes through the same routine and then this loop continues until either the objective is completed or all units are destroyed.

Unlike a standard tabletop game however, units aren’t simply static pieces of plastic. Each army is still coloured a simple red or blue, but infantry will run and their guns will blaze during combat; tank barrel flashes are accompanied by a thunderous boom, shells exploding on their chosen targets; and missiles loop around, trailing smoke, crashing down to rain fire and death on enemies. Unless your random dice rolls don’t do the numbers, which is often the case, thanks to the horrid RNG. During the campaign’s early missions, you’re outgunned by some margin already, but the rate at which my bullets and shells would land wide of the mark was infuriating. It’s worse than XCOM’s 99% hit chances that would lead to agonising misses. It wouldn’t be so bad if that were a one-time thing, or a rarity at least, but it happens far too often to be pure chance. Especially when I was forced to watch the AI’s Ogre land almost every single shot it took, wiping out my armies with horrifying precision. You might argue that this precision is realistic, what with this being a machine incapable of basic human error, and to some degree you would be right. But this is a game and you expect at least some leniency in order for it to be fun to play, which Ogre simply isn’t when playing the AI. Against other players however, you’re both subjected to the RNG issues and it balances out. Unfortunately the campaign is entirely against the AI, as are the skirmishes, and it just remains unbalanced and it sucks all the fun out of playing. It’s a shame, because the AI is impressive to the point of being able to completely outmanoeuvre players, which obviously takes you completely by surprise as you suddenly find yourself on the backfoot.

Ogre does at least capture some of what it’s like to play a tabletop game, with its functional-but-authentic maps that look just like the real game’s boards. Units look like animated versions of the miniatures too, which just adds to that immersion. Being able to create and share your own custom scenarios is a great addition, allowing you to play the game endlessly with friends, whether they be online or local. But all this just falls by the wayside because of the unfairly punishing difficulty level when playing solo, and RNG that honestly feels stacked against the player.

Captures the feel of a tabletop game
Impressive AI

Digital tabletop games are a great idea, but Ogre is simply too harsh for anyone but the most stubborn of players, thanks to some of the worst RNG I’ve seen. When played with friends however, it shows how good the game could have been.