Elections of US America Election – The Card Game Review 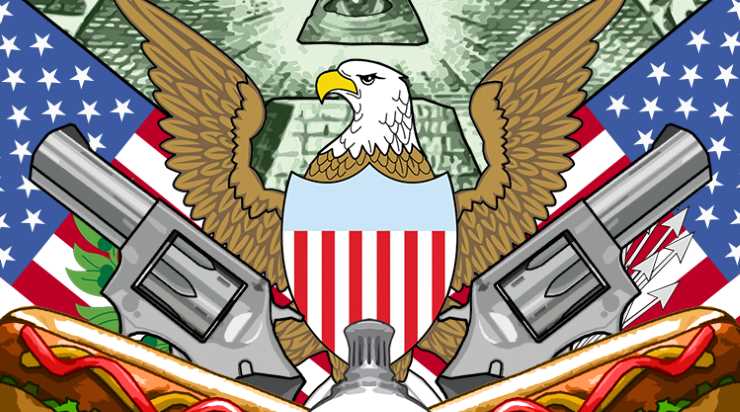 Back in February 2016, Auroch Digital and Wonkette successfully funded their Kickstarter of their US Presidential Election themed card game, Elections of US America Election – The Card Game. So now that it has hit the mailboxes of campaign backers, it’s time to see if if was going to launch a stunning political career, or miss the trampoline and crash face first into crushing scandal.

First of all, you can’t hide from the sharp barbed tongue-in-cheek view that the designers have taken to the election campaign. The writers have gone to a lot of trouble to make sure that where possible, digs are made on every single piece of text on the game, whether it be a humorous side fact about a state or the special powers they have bestowed on one of the candidates. There has been a large amount of work put into the flavour text on each and every card.

It’s fair to say that when you open the box, it isn’t just the smell of freshly printed card, but the pungent aroma of fresh satire that prevails as well.

This game is all about the race to The White House, and your role as campaign manager is to secure as many Electoral College votes as you can get your hands on, while building up your team and smacking down any potential opponents in your path. Firstly, you’ll select a candidate at random, and there is quite a choice, from Clinton to Trump, and Cruz to Bernie Sanders, and even Mr Lincoln makes an appearance. Each have their own additional abilities that can come into play during the game to stop Scandals in their tracks or give immunity from certain in-game effects or even allow you to draw more Wonk cards than normal.

Wonk cards act as in-game modifiers, and provide the much needed boost to your powers of persuasion when it comes to the ballot box.
The candidates have a certain attraction level or Appeal as it is called, and this is broken down into Republican, Democrat and Independent levels for different voters. Your appeal value will allow you to collect cards up to the that value during what is called a ‘State Round’. At the beginning of a round, a selected player will have the choice to either select a Large State, or multiple Small States. Each of the states has total number of available voter cards and a certain number of Electoral College votes to win. Using your appeal, you then have the chance to win the most voter cards and therefore win the state.

What you will notice is that at the beginning, your Appeal simply won’t be high enough to collect certain voter cards, especially those that are heading towards the giddy heights of six or above. This is when the Wonks cards will come into effect as some of them allow you to take on additional staff that will in turn allow you to increase your overall appeal to the masses. So be prepared to take on a Lawyer or a Social Media Guru to increase your Appeal.

Playing a Wonk card will mean you won’t be allowed to collect any State votes for that round of play, though it will mean you’ll boost your chance to collect them the next time around. It introduces an interesting risk and reward strategy, where you have to make quick decisions whether or not to jump in a grab the smaller vote stacks and holding back and cleaning up.

Even the turn of a State card can result in an unwelcome scandal appearing. Sometimes even before you have the chance to fight for votes, some cheeky card text can resort in you losing a member of staff, or Appeal, across a certain demographic.

It’s the surprises like this keep the game interesting, as an unwelcome change can in some ways alter the overall outcome of that State round and potentially the game. The design graphics are simple, striking but at the same time very effective and easily allow you to learn what the different cards will mean instinctively when you flip them over. Special mention should go to the individual candidate cards where the strong designs are excellent, and instantly recognisable, even the Ted Cruz one looks human.

The only downside is the text, which seems to mix the flavour text and the call to action, and it would have been better suited to split them slightly by having different fonts or the direction in bold text.

Elections of US America Election: The Card Game is in unusual place in terms of its mixture of theme and mechanics. It certainly comes down squarely in terms of strong satire of its portrayal of the presidential process, picking on the easy wins where it can, and leaving none of the candidates in a worse light than anyone else.

It comes at a time where it isn’t the only game in the genre, and therefore some cleverly written cards just might not be enough in order to make it gain friends and influence people. However the overall mechanics are stronger than the subject matter, so even if you stripped away the politics, you would be left with an interesting and extremely tactical card game that has some simple base mechanics that are easy to pick up and play, but depth that is introduced through the use of the Wonk cards.

The only major gripe I would have is the game time itself, which in playing the full version to win the required 270 college votes can take a matter of hours, which is unusual in a card game of this type. In that situation, and because I’m not American, the interest to continue on and see things through to the end wavered considerably, and often games were cut to the shorter 70 College Votes finish line.

At the same time, those who are settling down for a night of conversation and fun among friends might find this an entertaining distraction that doesn’t require a mass of rules to learn, but can still provide surprises in terms of its tactics and gameplay. You should seriously consider voting with your wallet on Elections of US America Election.