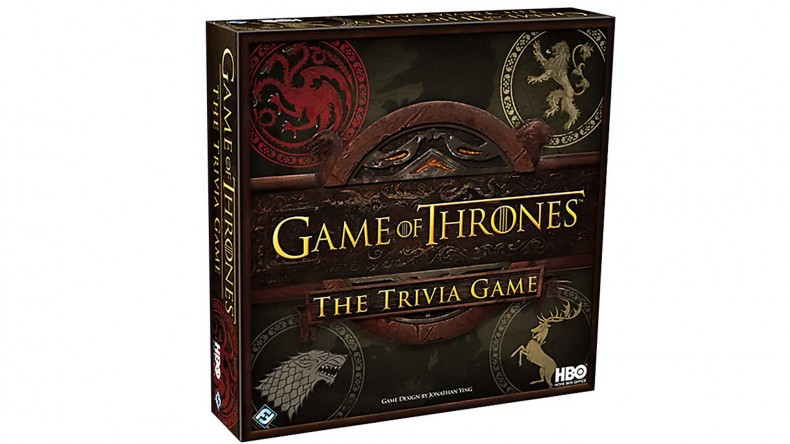 Being a massive Game of Thrones fan, having read the original novels and watched every episode of HBO’s series more than once, I went into the Trivia Game from Fantasy Flight expecting it to be pretty straightforward. Ask some questions, answer some questions, feel superior. In actual fact, it’s a surprisingly deep affair.

Designer Jonathan Ying has put a lot of thought into how to make his game stand out and feel like more than just a series of questions and answers, and he has managed to pack in some really cool ideas.

The core premise is that instead of simply beating your opponents at a battle of Thrones-themed general knowledge, you also have to focus on dominating the game board by taking control of key locations. The board itself is a representation of the map of Westeros, and it’s wonderfully well drawn.

Each player has nine tokens, called “markers”, which go up inside and importance based on the sigil upon them. Helm is small, Horse is medium and Crown is large. Each turn you select a location such as King’s Landing, Winterfell or the Dreadfort. Then the person to your left asks you questions based on your marker (1 for small, 2 for medium, 3 for large). If you answer them all correctly, you can occupy that spot with your marker. If you have more markers on a space than anyone else, you “control” that location.

After each turn you move the Round Token one space, and when it lands on a white space you enter a Picture Round. The only difference here is that the questions relate to the picture on the card rather, so will be directly related to a specific character, place or event in the TV series. The game ends either when one player has placed all their markers or when the Round Token reaches the end of its board. The winner then is whoever occupies most locations.

Because Game of Thrones is a complex beast, there are also deeper layers to the Trivia Game. If you want something more challenging, you can factor in resource cards.

Each location has an abundance of a certain resource, either soldiers (sword icon), knowledge (raven icon), or money (coin icon). If you successfully place a marker on a given location, you can take a corresponding resource Token, which in turn can “buy” allies in the form of Favour Cards. These are powerful one-use buffs that can really turn the tide. For example, the Khal Drogo card allows you to move one marker from any location to any other and displace all the other markers already there. Very handy.

Displacing is the most valuable move you can make, removing any enemy marker smaller than the one you are placing on any given location. It actually feels like political manoeuvring as you choose the most tactical, and often ruthless, route to victory. It didn’t take long to get to grips with Jonathan Ying’s clever, original ruleset, and once I did I had a lot of fun. It helps the more casual Thrones fan that the questions all relate to the show, not the books. As a result, the cards use mostly still pictures rather than artwork, which is a shame as the artist impressions of Thrones characters are often superb.

Accessible and fun, and crucially only as complicated as you want it to be, Game of Thrones: The Trivia Game is original and well designed, easy to set up and fun to play.

Easy to set up
Well made
Feels authentic

A fun, easy to understand board game with varying levels of complexity that should appeal to any Thrones fan.