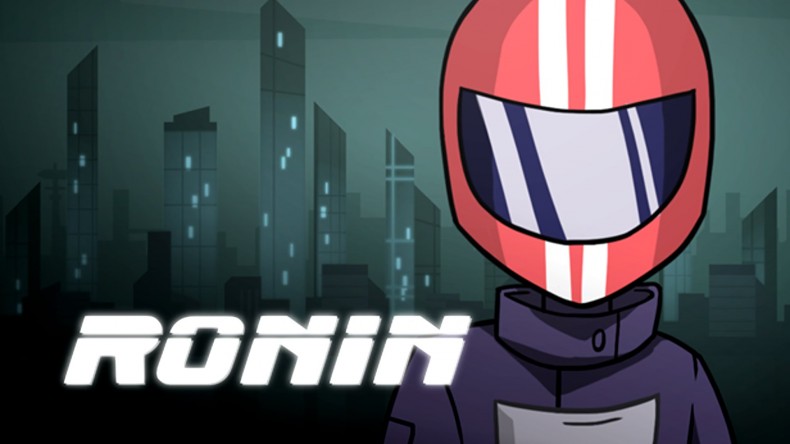 Revenge is a dish best served through a complicated aerial ballet while wearing a motorcycle helmet and wielding a samurai sword. Or at least that is what Ronin, a turn-based stealth action ninja game, would have us believe.

You start Ronin with very little background to give you a reason why you are breaking and entering into various fancy buildings and brutally murdering everyone you come across. Through a short scene you learn that you are on a mission to avenge the murder of your father. Each of your targets is identified on a happy smiling photograph, so presumably at some point you were close, but that is never really ever clarified.

Your target is highlighted with a red, foreboding circle drawn over their head and each mission you undertake plays out exactly the same. First you must break and enter, kill everything that moves and hack into three computers to discover the whereabouts of your target. The next mission you must take that target out. After each section, provided you have achieved three mini objectives, you will be rewarded with a skill point to improve your abilities either defensively or offensively. These three mini objectives are exactly the same in each level: don’t kill any civilians, don’t trigger any alarms, and kill every enemy. If you fail in any one of these three mini tasks you will not receive a skill point at the end of the level. In earlier levels this seemed inconsequential, however in later levels being actively punished for failing one objective and therefore not being given the opportunity to learn a new skill does nothing but make levels feel significantly harder than they could have been.

One such example of this was on the third boss. I had been finding my feet in earlier levels, learning the mechanics and how best to traverse environments so I had often failed on at least one of the mini-objectives. By the time I reached the third boss I had only accumulated two skill points, both of which had translated into me choosing to be able to throw my sword mid-jump. A perfectly reasonable and useful skill on the face of it, in practice a mostly pointless ability as once thrown I then had to navigate the room again to pick it up to be able to continue to rain down bloody vengeance on the rest of the enemies. It was only at this point in the game that I really started to look at the upgrade tree in a significant amount of detail. On there were other abilities like being able to hang an unsuspecting enemy from the ceiling, or being able to teleport to enemies straight away. There was even one for recalling the sword once it had been thrown, all skills that would have made the puzzle I found myself with on the third boss significantly more bearable and likely of success.

Now, I full appreciate that it was perhaps my fault that I hadn’t initially studied the progression tree in any great depth, or that it had taken me a few levels to trigger that failing any one of the mini-objectives meant that I couldn’t upgrade my skills sooner, but as a mechanic within a game I really feel it is not best practice to punish a player in this way and make later levels nigh on impossible to complete. The main reason the difficulty without upgrades seems insurmountable is down to the movement. You have two types of gameplay: you are either in free-form mode where you use the right stick to move left or right or, once you encounter an enemy, you go in to turn-based mode. In this mode you can only jump, and you are always the first to take a turn. To jump you use the right stick again, but this time an adjustable arc appears on your screen to show you your trajectory. Enemy gunshots are conveniently highlighted with red lines so you can adjust your jump accordingly to miss being killed mid-leap. Difficulties creep in when you choose to hang from the ceiling and you are in line of fire for the next turn. Because you are in turn-based mode, you can’t simply shimmy a little to the left to avoid the gunfire, instead you must jump from this position which in later levels with multiple lines of gunfire to avoid becomes exceedingly difficult and will very often give you no choice but to die as you have no escape.

You can stun an enemy by landing on them which then gives you two turns to be able to work back round the room to kill them. By performing actions like this, or actually killing an enemy, you gain action points. Action points fill up a bar at the bottom left of your screen and allow you to activate the skills you have accrued… or not in my case. If the bar completely fills then you are awarded two turns to move about the room performing actions. Once turn-based mode is activated you must either kill every enemy in the room to be able to go back to free-form mode, or somehow break the line of sight of the enemies. Breaking lines of sight is incredibly difficult to do though as the guards seem to have preternatural skills and can see through floors and solid walls.

There are only four real enemy types that you encounter throughout the various levels, all of which require a different means to defeat. Difficulty is ramped up later in the game through increasing the enemy population, mixing the different types into the level and adding complexity to the environment with glass floors that can be shattered, or electrical cables that mean instant death should you pass through them. Each level is essentially a puzzle, the clock stopped at each move giving you time to ponder where to leap to next. When it works and you manage to string moves together it is marvellous fun, but more often than not it is a clunky process of trial and error hampered by an action point system that often punishes rather than rewards you. I lost count of the amount of times I effectively manoeuvred myself into certain failure and with a checkpoint system that is a little inconsistent some levels feel unnecessarily arduous.

Ronin isn’t a long game, but every mission is exactly the same with exception of the last boss. Once completed there is an option to play again via NG+, but I see very little incentive to do so unless you are keen on acquiring all the available skill points (providing you can meet the mini-objectives of course!)

Ronin has the potential to be more interesting than it is, but it is hampered by a few frustrating design choices. Halting progression entirely for less skilled players does little to encourage a play through to the end, and couple that with an inconsistent checkpoint system that does more to frustrate than help and you have a game that players may well abandon half way through. Furthermore, it also suffers from a lack of variety in missions as well as expecting you to complete the same three objectives each time to level up. When it works it is tremendous fun, but more often than not it doesn’t.

Ronin is potentially a really good game, but repetitive game play as well as a frustrating upgrade system makes it tough to finish to its conclusion.