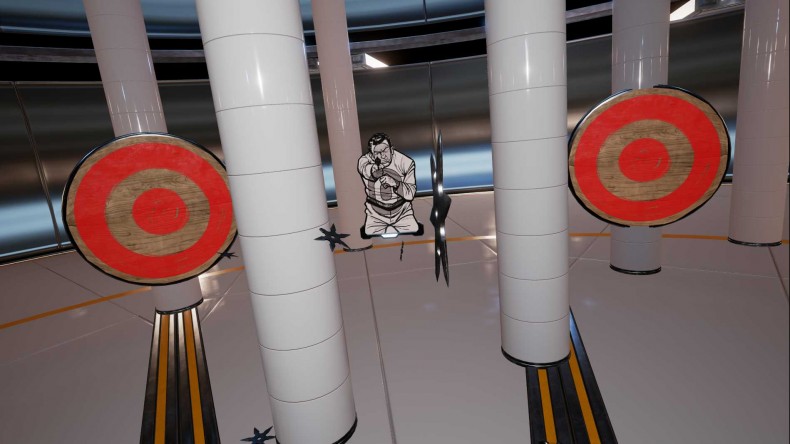 Fancy yourself a ninja star-throwing, sharpshooting master? Well Lethal VR lets you prove it. Furthermore, it’s fun and varied enough to give your skills some tuning and get your heart thumping as you compete against your friends’ high scores.

Indeed, Lethal VR is a great party game, allowing you and friends to immerse yourself in a number of different room-scale target practice environments on a quest to score big and look cool doing it. It’s immediately recognisable and intuitive. Like those ranges at funfairs and piers, or the arcade cabinets of yore, it’s as simple as pointing and shooting your gun or chucking your ninja star at static and moving targets, trying to score huge amounts of points by hitting bullseyes and avoiding obstacles and friendly targets. 30 challenges are available in total, spread across five different categories: Quick Draw, Knife Throw, Sharpshooter, Rapid Fire, and Combat. Each sticks with target-shooting or knife-throwing mechanics but with different scenarios, patterns, weapon sets and rules of engagement. Quick Draw lives up to its name and asks you to be fast with your gun as well as accurate, meanwhile Knife Throw has you perched in a sniper’s nest with a high calibre rifle… nah, it’s about throwing knifes, of course. Sharpshooter asks you to be vigilant as targets can appear in front, behind, to your sides, above and below you. Rapid Fire is more concerned with semi and fully automatic weaponry with quick fire and reloading, and Combat sticks you in a simulation of Hogan’s Alley, with plenty of targets and obstacles to really get you bobbing, crouching and even lying on the floor.

Competing earns you a score, saved on a local leaderboard to tempt your friends, family and your future self to beat it. And it’s a compelling high score-beating challenge. This is far more immersive and realistic than the target shooting days of light-guns in videogames. Here your physicality plays a bigger part in your success, and good aim in real life translates to good aim in these virtual environments. There’s true skill involved, and it can be learned and improved upon, with the high scores acting as precisely the kind of encouragement you need.

However, the leaderboards are currently local only, often leaving you competing purely against yourself for the top spot. Global leaderboards and Steam friend filters would go a long way in improving this aspect. Mind you, with 30 challenges to conquer, there’s’ still plenty of replayability. Across the categories are a variety of weapon combinations you can use. Wielding a pistol, semi or fully automatic SMG, ninja star or knife offer different levels of challenge and different skills to master, but it’s the combinations which really stand out. Dual wielding weapons is sure to get you re-enacting your favourite John Woo film. Shooting with one hand and throwing knives with the other is particularly exhilarating, while using two fully automatic SMGs against hordes of targets is equally joyous. You’ll unlock these weapon combinations as your progress through the challenges, and eventually you unlock some special weapons where reality and fiction blur a bit more and the fun reaches new heights.

Lethal VR does a great job at taking the well-known target shooting premise to the next level. 360 degrees of potential targets in a room-scale VR experience takes the inherent entertainment of scoring from accurate and fast hits on bullseyes and truly gets your whole body in on the action, rather than just your arms and eyes. A few hours of target practice here translates to better hand eye coordination in the real world, and a general feeling of badassery with a high score entry to prove it, and it’s a compelling feeling that keeps you coming back for more.

Lethal VR’s lack of Global leaderboards means your high score chasing is restricted to local friends and family, but there’s still plenty here to keep you from taking your headset off.