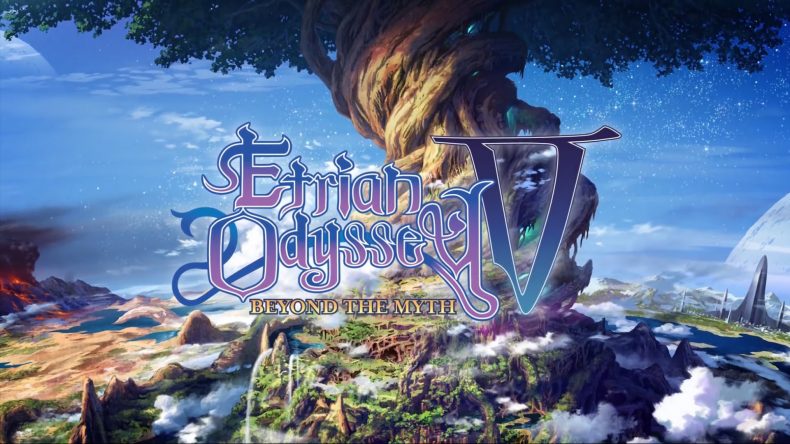 After more than a year of waiting, Etrian Odyssey V: Beyond the Myth has finally released in English. The wait has been almost as excruciating as that damn spirits club in Persona Q. At one point many people (including myself) thought Atlus was just done with the 3DS in the West, but before E3 we got a trifecta of announcements. I was excited to play Etrian Odyssey V not just because it is a new Etrian game but also because it is the first time a new Etrian game is releasing when I’m familiar with the franchise. This year, the Etrian Odyssey franchise celebrates its 10th anniversary and there’s no better way to celebrate than a game that feels like a true evolution of what makes Etrian Odyssey so great in the first place, quality dungeon crawling.

While Etrian Odyssey IV and the Untold games on the 3DS have been big departures from the classic Etrian I and II gameplay, Beyond the Myth goes back to the beginning. This game has no story focus or airships or anything like that. In some ways it does feel like a step back but the improvements and new features to classes, customization in general, and skills make it feel more focussed and evolutionary. Creating your own party and traversing through a giant dungeon that is split up into stratums is what you will be doing here. Each character in your party can be customized to a frankly crazy degree and there are even multiple voice options. You have the ability to change colours of things like eyes, hair, and more. There’s the freedom to use whichever voice with whichever class and portrait here. You can even opt for no voice if you’re going completely old school. Speaking of going old school, I’m quite annoyed that the FM soundtrack DLC is releasing on October 31 and not at launch.

Instead of just having classes, there are now races and classes. Once you select a race, you get to pick a class to start off with, but can change classes early on in the game. I’d recommend sticking to the standard race and class combinations unless you’re a veteran Etrian player. Skills are also split up into class and race skills. This is an interesting twist on a tried and tested formula. The good thing about a robust customization and class system that now has a race system as well is the various combinations you can come up with to play. If you feel adventurous, a triple Necromancer party is always an option. In fact I’d recommend redoing the opening with a few party combinations to experiment and see what you fancy. When you level up and have a skill point, you can either use it in a race skill or in a class skill. While there are some NPCs that you interact with in the labyrinth, don’t expect a grand story. This experience is all about your own party and navigating the labyrinth until the end. Instead of multiple dungeons or a separate story dungeon and the likes in the newer Etrian games, you just have one big dungeon here that is split up into stratums with a boss fight at the end of each stratum. There are 30 floors in total for this dungeon. This is another callback to classic Etrian Odyssey with one big labyrinth. Exploration and map drawing is still in first person with maps on the bottom screen. The best part about a new Etrian game is how all the quality of life improvements to map drawing from past games are all here. It makes it hard to go back to older games thanks to this. Combat is turn based again and the in game UI is really nice. It isn’t drastically different to Untold 2 but recedes into just icons until you highlight an option which is a nice touch. I’ve always been impressed by Atlus game UIs. Back to the combat, get ready to make full use of status ailments, binds, and more here. A Botanist with poison early on is a fantastic party member to have.

Aside from the great in game UI, I’ve always enjoyed the visual direction for the labyrinths in Etrian Odyssey games. V is no slouch here with lush and unique locations for each stratum. There’s even an outer space themed area here. Enemy design could be a bit better especially for bosses. I love the final boss design and encounter but some of the others including the first stratum’s boss design are weak. The score for this release has been done by Yuzo Koshiro and it baffles me how he manages doing a fantastic score for Etrian games every single time. I can’t think of another franchise with this level of quality across the board for soundtracks. Given that this is a throwback to classic Etrian Odyssey, I feel like the FM music should have been included from the get go and not be DLC. Voice acting is good, but having to hear the same line for a character when you unlock skills is annoying.

One area where Etrian Odyssey V is a step back outside of story obviously is in accessibility. Etrian Odyssey 2 Untold added a third difficulty called picnic. This made it much easier as the name suggests to get through the story and allowed a lot of people I know who avoid this franchise due to difficulty to get into it. Etrian Odyssey V is harder than both Untold games and IV by a fair amount. If you do want to have an easier experience, there are DLC quests you can buy to cheat in game. Not ideal and while quests like this were present in Untold 2, that still had an easy difficulty option for newcomers.

If you’re an Etrian Odyssey veteran who has been there from the start or just loves the DS games, this is made for you. Even if you did get into the franchise with IV or the Untold games, I’d recommend giving this a shot. It is classic Etrian Odyssey with a modern coat of paint and some of the best customization options ever. There’s so much you can experiment with and a ton of replay value with the various class and skill combinations that play with the race skills. Etrian Odyssey V: Beyond the Myth is a great game and a worthy release to celebrate the 10th anniversary of the franchise.

Etrian Odyssey V is a true successor to the original two Nintendo DS Etrian Odyssey games but one that has modern improvements to gameplay and a best in class customization system.

The Etrian Odyssey V: Beyond the Myth demo is now available in Europe

Etrian Odyssey V: Beyond the Myth gets a new trailer showing off the Warlock