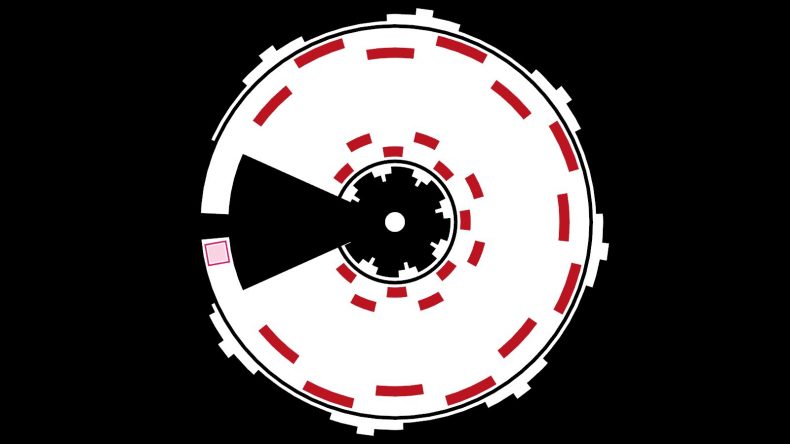 There is something beautiful about Expand, from it’s monochromatic minimalism to the gorgeous soundtrack that accompanies it. A simplistic puzzler that confuses and infuriates through a sequence of in concentric circles that expand and detract in a hypnotic fashion.

You are in control of a small pink square that seemingly must navigate a multitude of mazes. These mazes shift and change as you move around them, sometimes with the circle increasing in size so you can see more, sometimes narrowing it right down so barely any of the future path is seen. As you progress further there are moments of peril where black shapes move and can crush you, or red shapes which if you touch them will send you back to the last checkpoint to try again. Sometimes the maze spins as you try to navigate it changing the way you control your pink square, where up and down and left and right interchange regularly.

There are four “worlds” that you need to navigate to finish the game, each with their own unique take on the core mechanic. You access them through a labyrinthine hub area with its own set of puzzles that you are required to solve to press buttons to open the doors to the worlds. It is entirely up to you which world you tackle first with each one holding its own particular challenge. Expand is a pretty guided experience with only one way to go, so despite the levels taking the appearance of a circular maze you are never in any danger of getting lost. Challenge comes in a variety of forms, if you fail because you touched a red shape, or you were crushed by moving black objects you will be transported back to the last checkpoint, the map will also move around a certain degree meaning what was up last time may well be right this time. This constant alteration in the way that you move your pink square is the biggest challenge and I often found I performed better at certain challenging areas when the maze was orientated in such a way that the movement felt most natural to me.

In the earlier levels, the way you move feels smooth, almost weightless, and with the movement of the circles increasing and decreasing it feels very hypnotic. Moving through the obstacles without a moment hesitation feels satisfying, however as you progress into later levels where the sheer amount of obstacles and perils increases as well as less generous checkpoints it starts to feel like an obstinate battle. The fact you are moving a square shape through a circular world often feels at odds with the early feeling the game gives you as it is extremely easy to clip objects and either slow down or fail. Expand isn’t a very long experience at roughly three hours to complete depending on your dexterity in the later levels. For the most part it does feel meditative, especially with the wonderful soundtrack, but I found that moments in one particular level dragged me out of the rhythm state the earlier game gave me as my brain couldn’t seem to co-ordinate the movement of the square effectively through the ever changing obstacles. For a game that feels specifically about progression rather than the mechanics to achieve it, the moments where I had to repeat certain sections over and over again felt contrary to that core aim.

Expand is a unique game, visually distinctive and at times quite beautiful, but it suffers from a little unevenness in some levels which distract from the meditative experience it has been pitched as. It has some wonderful ideas that for the most part are well executed but at times it does feel very much like you are trying to put a round peg into a square hole, or in this case a square box into a circular world.

A unique game that's visually distinctive and at times quite beautiful, but it suffers from a little unevenness in some levels which distract from the meditative experience it has been pitched as.