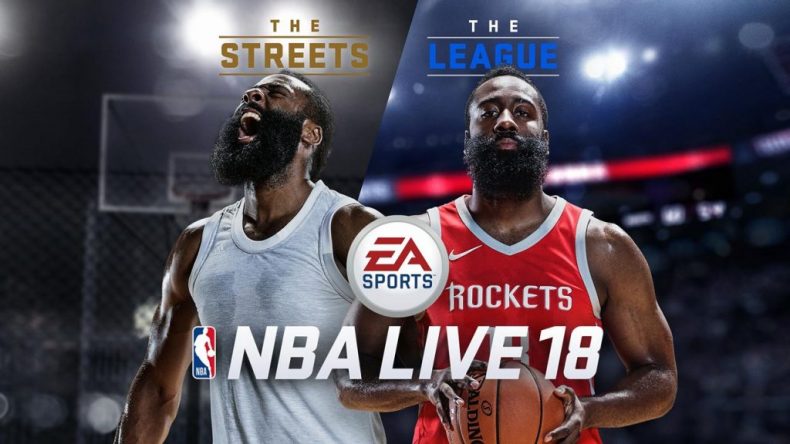 When E3 rolled along, and EA took to the stage to announce their releases over the next few years, I was kind of hoping for a new Fight Night. Unfortunately, I was left without the news I craved, however, when Kendrick Lamar’s DNA kicked in, and the trailer for NBA Live 18 went off, I couldn’t have been happier. This was the flagship basketball series – the one I’d obsess over as a teenager, and the one I spent hours playing when I was younger. I played the demo a lot, and liked what I saw, but there were concerns, and with the monumental 2K series sat firmly atop the division, it was going to be a challenge for NBA Live to even challenge for the throne.

NBA Live 18 is a vast improvement on its predecessor, but outside of EA’s take on a story mode and Ultimate Team, there’s very little to get excited about. The presentation is good, but not great. Facial animations can be a bit wooden, and don’t have as much definition or individuality that NBA 2K18 has, and the commentary isn’t as reactive or informative either, often repeating weak links in your performance.

Saying that, if these are the new foundations of a potential yearly release for NBA Live, and EA Sports are serious about keeping to that schedule, I’m in. The game is much more streamlined, and many of the core mechanics are easier to get used to that 2K, such as the shooting and defending. There’re not as many variables to factor in whilst shooting, or rather the game doesn’t punish you for getting your location and stance slightly wrong. You can put up a jumper whilst being guarded and score if the stats are willing. Dunking and getting to the basket is much easier too. I lost count of times I had Paul George dunk on the opposition, often thanks to a Melo assist (it’s good to know current trades are accounted for, as Carmelo Anthony was with OKC as soon as the deal was finalised). As for moving the ball around, I found the AI of my team unable to adapt to the opposition’s style of defence, and there was rarely a lot of movement on the court. Dribbling is basic – which isn’t a complaint. It’s rather satisfying moving the ball as crossovers are natural and easy to do.

Where NBA Live 18 shines is on the defence. Holding L2 has you planting your guard when marking a player, and if you’re faced with a player dribbling towards you, moving to the left or right to try and stop movement at the right time has a green arrow pop up underneath the player, and an opportunity to steal the ball presents itself. It’s great, and it also gives you more control over your defence. Generally, NBA Live 18 is much more forgiving than 2K18, but it’s nowhere near as advanced or as balanced, and it never feels like it pays as much attention to individual player’s stats.

When it comes to cover stars, EA hasn’t only got one of, if not the best point guard in the NBA to be a part of it, they’ve also got him to take an active role in doing voiceover in the story mode. James Harden is a 4-time NBA All-Star, and has a great season ahead of him at Houston, especially with the acquisition of Chris Paul. He’s about as big as it gets, and hearing him in Live isn’t as wooden or as weak as other sports stars that have come before (I’m looking at you Rory McIlroy). EA’s The One is by far the best thing about the game, having you create a character and take him from the streets to the NBA, and back to the streets. You play everywhere, levelling up and playing both on your own and online, always staying connected to the game. In the story mode, you play at a multitude of famous street courts such as Rucker Park, and as you do you learn more about your back story through actual recordings of ESPN’s First Take done especially for your created character, featuring Stephen A. Smith and Max Kellerman. These are the most interesting thing about it, but the story itself takes a back seat to your journey to the NBA anyway.

You can take your player online in Live Events, with new challenges popping up all the time, and by winning you’ll not only earn XP, but you’ll also get some loot boxes. Whether you agree with them or not, NBA Live offers the same experience as Overwatch. New threads, tattoos, and trainers are gained through these loot boxes, and you can buy them as well as unlocking them through rewards. As far as your stats go, XP allows you to focus on certain stats, and new skills and play styles become open to you the higher you get. It’s structured rather well, and unlocking new shooting stances, skill trees and items becomes addictive.

Elsewhere, NBA Live 18 is a little thin. The Franchise mode is fine. It doesn’t do anything special, and the options as a coach or player aren’t that varied, as for most of the season you’re just playing games without much else happening – it just feels hollow. Ultimate Team is great, and is essentially the same as Madden or FIFA. Playing it is just as fun, and opening those elusive packs is as tense and exciting as it’s ever been. The WNBA is the best women’s basketball league in the world, and EA has included it in Live, allowing you to play as all your favourite teams, such as the LA Sparks and New York Liberty. The style of play has been made to feel like the WNBA, and the attention by EA to match this is impressive.

EA Sports has done well with the presentation on the whole game, only falling short with player animations, both in-game and during breaks in play. Whilst it does look good for the most part, the commentary isn’t its strongest point, having Jeff Van Gundy falling into the trap of repetition, especially when playing games for the full 12 minutes a quarter.

NBA Live 18 may not be the best basketball game available, but it is a huge improvement on previous entries, and I hope it’ll return to the yearly release schedule because if this is anything to go by, NBA Live has a promising future. Gameplay is easier to get used to, The One is a fantastic mode, and the soundtrack is wonderful, it’s just a shame the Franchise mode feels empty as it’s normally my go-to mode.

The One is a great mode
WNBA
Defending works really well

Whilst it may not be the complete package, it does a lot right and has a new and sturdy foundation to build the future of the series on.