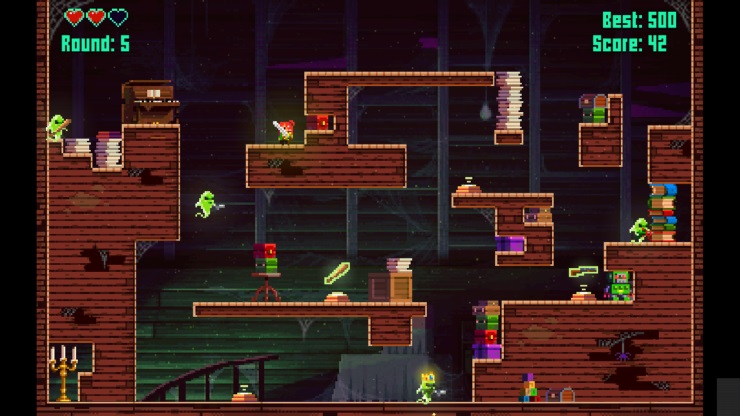 Reviewing video games can be a real mixed bag. Sometimes you’re lucky enough to get a AAA title, other times you’re left with rushed movie tie-ins. Often games will be middle of the road, decent at what they do but nothing more – and a lot of games are released that simply fly under the radar. The best times, though, are when you find that hidden gem, something you’ve never heard of before it lands in your in tray. Extreme Exorcism is firmly in this camp.

A 2D, pixel-art beat-em up, the arcadey premise is incredibly simple: kill the crowned ghost that appears in the single screen room stage, repeating over and over until you’re left with the Game Over screen and – hopefully – a new high score.

The twist is that the ghosts you must slay are literal ghosts of your previous selves. Every move, every double-jump and (most importantly) every attack is copied, through to where you killed that round’s crowned ghost, before being reversed and so on until you finally kill them. When there’s only one or two of your past selves running around it’s easy enough to keep track of what they’re going to do, but at four or more it becomes a challenge just to stay alive, let alone seek out your target. Your survival is helped by the myriad weaponry you have at your disposal. Pistols, mines, and bazookas are mixed in with throwing knives and magic staffs, of which you can hold three at once, with them all firing at the same time as well. Such an arsenal adds to the chaos, but you’ll want to avoid spraying bullets in every direction – you’ll be coming up against yourself in the next round after all.

Should things get a little too frantic, the exorcism power-up appears every so often, allowing you to permanently banish any ghosts caught in its radius. The combination of this with enemies that you can direct with enough forethought means that Extreme Exorcism demands a surprising amount of strategy. Being careful with your trigger finger and clever with you exorcisms is the key to success.

The arcade mode sees you unlocking new levels and weaponry when you get certain scores, making your way through the haunted house that serves as the setting. It’s quite cool, with the stages set in each room offering a new type of obstacle – flames in the kitchen, moving books in the library etc. The ultimate aim it to make your way to the altar in the basement, where you’re faced with a boss fight. Throwing everything that makes Extreme Exorcism different out the window, it pitches you against a giant demon, dodging its movements and the ghosts it throws at you until an exorcism power-up appears. It’s a sour note on which to leave the game. Luckily the inclusion of four-player local co-op makes up for it. Playing through the game with a friend makes things even more chaotic, with their ghosts mixing with your own, making them unpredictable. Admittedly it becomes a little easier overall – with more of you to take out the ghosts in each round and the ability to respawn your partner after their lives are gone by killing a certain amount of ghosts, but it is still fantastic fun.

The visuals are what you’d expect from a pixelated indie game. Despite all the chaos that can happen though, it’s always relatively clear what’s going on, with ghosts bright colours – the same as the hunter they are from – and weapons the are easily distinguishable on their spawn pads. Collision detection can be a little wonky, especially with the flames in the kitchen area, but on the whole the graphics are a joy.

A Towerfall-like deathmatch mode is also included (where you have to kill your mates, gaining a ghost of your previous round if you win), as is a challenge mode, which tasks you with getting a high score using only certain weapons. Nice distractions from the core arcade mode, the latter doesn’t offer much beyond score hunting, so if that doesn’t float your boat it’s maybe hard to recommend.

If you’re looking for a dip in and out arcade fix though, Extreme Exorcism ranks among the best I have ever played. Its fast and frantic nature allows anyone to play – and to feel good at it – while at the same time offering enough depth for score hunters to master the perfect strategy on it’s various stages. This coupled with its excellent multiplayer makes Extreme Exorcism well worth a look.

A clever, ghost-busting title that’s even better with friends.