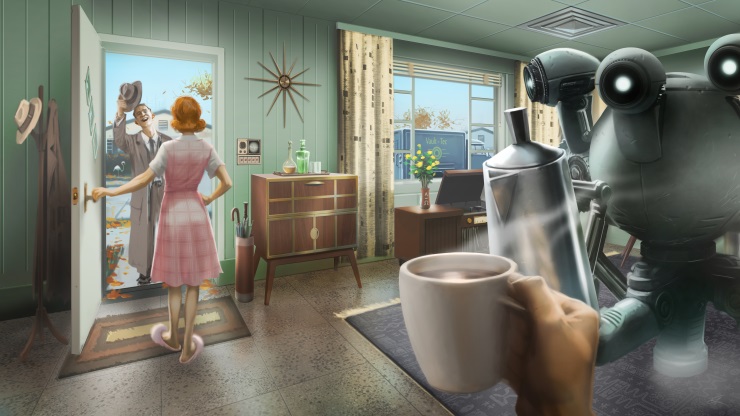 There’s a moment in Fallout 4 that occurred for me after about 14 hours, where (for reasons I won’t spoil) you have to strap yourself into the gunner’s side of a refurbished helicopter gunship and take the fight to the enemy like its a hot day in ‘Nam. The only thing missing as I unloaded my full wrath upon Boston Common via the medium of mounted minigun was Long Tall Sally. Had someone played that there and then, I might well have passed out.

It was at this point that it really had me. I’m not saying it took 14 hours to get going; there are some incredible “wow” moments from the off: acquiring your first suit of power armour (now a parkable, upgradeable walking tank as opposed to a suit you lug around in your inventory), your first encounter with a terrifying Deathclaw, rescuing a hostage from a high-rise building as you orchestrate a gunfight from an exterior elevator – these are all great, and they’re just a few of the things I stumbled upon.

The reason it got such a tight grip on me in that gunship was simple: it was when I first realised that I simply didn’t know what was coming next. Going in as blindly as possible and prepared only by 250+ hours in Fallout 3 and New Vegas, I wasn’t expecting Bethesda to put me in a vehicle at any point, much less a gunship. And it’s an awe-inspiring moment. I’m not going to pretend it’s as pretty as The Witcher 3, for example, but the sense of scale in Fallout 4’s Commonwealth is staggering – and seeing it from such a height made me sit back and smile for a moment while I took it all in. Moving the action from the Capital Wasteland of Washington DC to Boston, it drops you into the shoes of a new wanderer with a backstory more interesting than anything that happened in Vault 101. The campaign begins 200 years before the bombs drop and destroy the world, and the opening hours give a wonderfully charming glimpse of the retro-futuristic world of Fallout’s 2077. It’s all incredibly American, as you might expect: white picket fences, gingham dresses, apple pies and consumerism. The much-publicised character creator allows you to modify a married couple in any way you could hope to, adjusting everything from hair and skin colour to body shape and ear size. It’s presented from a mirror’s PoV as the couple get themselves washed at the bathroom sink, and whoever you step away from the mirror as becomes your avatar (which you get a chance to change before the Prologue ends).

As you mill around your house interacting with things and waiting for something to happen, you’ll be called by your robot butler, Codsworth, to check on your infant son, Shaun. At this point, quite cleverly, Codsworth will refer to you by whatever name you’ve given your character (within reason), as Bethesda recorded around 1,000 popular names. It’s a nice touch that genuinely made me smile, and continued to do so every time Codsworth popped up. Needlessly to say, it all goes horribly wrong when the bombs drop, and you’re forced to get your family to the safety of Vault 111. Avoiding any spoilers, it’s suffice to say that when you leave the Vault, everything has changed, your family is missing, and your life revolves around finding them, no matter the cost. Or it would, if this wasn’t a Fallout game. The problem with having to track down your missing family across a lethal, irradiated post-apocalyptic wasteland is that there’s just so much to see and do, so the emotional potential of the central narrative is heavily diluted. It’s still compelling, and the primary mystery is excellent, but unless you resolve to blast through the main storyline in one sitting and tackle everything else afterwards, it’s easy to forget that your protagonist is supposed to be a frantic parent terrified for their child’s safety.

Cleverly, the multiple secondary quest-lines involving the Brotherhood of Steel and the Minutemen (among other factions) are loosely interwoven with the main narrative, so even when you’re going off the reservation you feel like you’re pushing the story forward. You never feel like you’re being swept along by events, and if you do decide to spend a bit of time solving mysteries for the local private eye, or liberating settlements from the fear of predatory Super-Mutants, you feel like what you’re doing is worthwhile, even if it is distracting you from the search for The Truth. It’s a new Wasteland, you see, one plagued not only by radiation, raiders and mutants, but also by paranoia, as a shady organisation known as the Institute creates and fields an army of “synthetics” – the latest models of which can blend in with the populace. Yyou can opt to go it alone, but a handful of companions will become available to quest alongside you as you progress, starting with your faithful German Shepard, Dogmeat. Although they’re indestructible, they can be incapacitated during combat, and the AI is barely able to do more than stand still and shoot things. They may come in handy as a second gun in an encounter, but they’re often most useful outside of combat. Some will give you a constant stream of side-quests, others can pick locks, hack computers or, in the case of Dogmeat, go and find you ammo and treasures while you put your feet up. Although, you’re unlikely to find much time to stand idle when the world so persistently requires your agency.

The Commonwealth is gargantuan and “alive”. Trade caravans draw constant lines across the vast map, and by working with the Minutemen, you’ll both liberate and govern scores of settlements. Once a township or farm pledges itself to you (usually after you’ve saved them from some foul fate or another), it’ll unlock the Workshop there. From here, you can craft pretty much anything you can find in the game. Buildings, stores (which you can invest in so merchants can stock and restock them), defence towers and turrets, power grids – even terminals. Buildings can be decorated and furnished, and you’ll need to provide beds, food, water, defences, and power if you want to attract settlers and keep them happy. Watching your network slowly grow and come to life is impressive, and certain perks will unlock new features for your towns, like supply lines. The crafting system is immense, eschewing the weapon blueprints of previous games in favour of a multi-level upgrade and modification system. For instance, you might begin with a weak, cobbled-together pipe pistol, which can (with the right materials and perks) be transformed into a high caliber long-range rifle with a night vision sight, silencer, and extended quick-release magazine. There’s a huge amount of modifications in total, but the better they are the more materials and perks they’ll require. Everything you can pick up is useful for something, from outfits that break down into cloth and leather, to microscopes that yield plastic, screws, fiberglass and steel. Need wood? Scrap a tree. Need steel? Scrap a rusty old car that’s been left to rot within the boundaries of your Workshop. It all makes sense, too, so if you need adhesive you have to find duct tape or glue; if you want ceramics you’ll need to find dinnerware.

Handily, you can store everything in your bottomless Workshop, and as long as you’re using a crafting bench that’s part of your network, you can use everything right out of storage without having to transfer it to your character. Lesser crafting systems such as cooking and chemistry offer buffs, healing items and explosives if you have the required skill, ingredients and equipment. You can lose hours and hours upgrading a single gun, thanks to a helpful system that lets you tag components you need so they’re highlighted out in the world. Even your Power Armour can be upgraded, re-modelled, and repainted at an appropriate workstation for use when you need to break out the big guns and go full metal nutcase on a colony of Super-Mutants or a rampaging Deathclaw. Combat has been hugely improved since the previous game, and although bullets will go where you want them to most of the time, this is still an RPG and there is a random number generator at work underneath it all. Your perks and weapon stats are major factors, but the Vault Assisted Targeting System (V.A.T.S) is now way better. It slows time while you tag targets rather than stopping it, and the slow motion kill cam is a lot less buggy (though a far cry from perfect). Most importantly, it feels like a natural talent rather than an irritating necessary mechanic, and you’ll likely take care of a good number of gunfights without it. That said, with or without V.A.T.S, combat difficulty can spike unexpectedly. You can’t see an enemy’s level or what they’re carrying unless the weapon is out, and running into a raider with a Fat Man nuke-launcher or a flame-thrower can cut you down to size fast. Sometimes it can feel unfair, even on Normal, so it makes sense to abuse the quick save.

Unsurprisingly, combat is the mother of around 70% of Fallout 4’s bugs and glitches. Slight slowdown is manageable, and the clipping and collision issues can be mostly ignored, but it froze once on me during a fight, requiring a complete reboot, and once I simply dropped down dead for no reason while climbing over a car. The bugs aren’t totally game-breaking, and there’s no texture pop-in or screen tear, but performance issues are there, and they can be frustrating – particularly when they require a reload or hard reset. In fairness, the world is huge and surprisingly pretty. Character models are solid, as is the lip-syncing, though this is no Tomb Raider or Until Dawn. But it’s refreshingly colourful in places, a long hike from Fallout 3’s drab brown/grey palette. Dynamic weather, lighting and wind combine to make the outside environments feel vital, and traveling at night can be unsettling when you can’t tell if that thing in the middle distance is a tree or a Yao-Gai.

With over 70 multi-level base perks to unlock, 100 comics to collect (all of which provide a permanent passive boost), and no upper level cap, there are potentially hundreds of hours of adventuring, scavenging and freedom-fighting on offer, and questions of morality that throw a magnifying glass over the human condition may be common but never lose their appeal. It’s hard to find genuine fault with what Bethesda has done here beyond the performance issues. They’ve taken everything learned from Fallout 3, New Vegas, and Skyrim and refined it into one huge, intelligent action-adventure movie. It’s more cinematic than you might expect thanks to a clever script and a dynamic chat camera, the combat missions are well thought-out blasts of adrenaline, while the trademark Fallout weirdness makes a welcome return now and then to relieve you of the constant need to fight something. It’s very much your game and your story, and everyone will play it differently simply because there are so many ways to play, and each one feels natural.

There’s always something to build, somewhere to discover, someone to help ,or something to distract you. Ignore the bugs (if you can) and leap into Fallout 4 with both feet, and you’ll find a game bigger, brighter, deeper, and more personal than anything Bethesda has done before.

Glitchy throughout.
Combat difficulty is inconsistent.

Bethesda have done it again, refining the formula for open-world RPGs and delivering a vast, deep and involving experience.