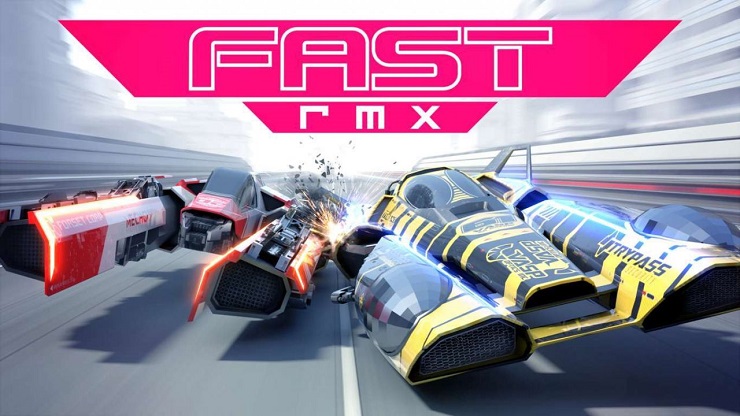 All new consoles need a racing game at launch, right? PS4 had Need for Speed: Rivals, PS3 had Motorstorm, Xbox had Project Gotham Racing; there’s a history of this, look it up. As a result Nintendo needed to ensure that their new machine had one too, and Mario Kart 8 Deluxe wouldn’t be ready until April so what were they to do? To save Nintendo’s blushes Shin’en Multimedia stepped up with a port of their eye-popping F-Zero a-like Fast Racing NEO, now dubbed Fast RMX (remix, get it?).

However, calling Fast RMX a port of Fast Racing NEO does Shin’en a disservice. The developers have gone out of their way to improve the experience of the original title by delivering a much sharper presentation, improved framerate and all the original game’s DLC; you can’t fault them, Shin’en have really gone all out to make this the definitive version of the game.

It also helps that as a racing experience Fast RMX is rather good; the tracks are full of twists, chicanes, choke points, wide straights and differing routes, and they’re put together really well. One minute you’ll be darting in and out of waterfalls looking to shortcut your way to first place, the next you’ll be dodging around the legs of a giant spider robot while your opponents burst into flames around you. Some of the track side scenery is stunning, with vast cities, ancient civilisations and giant worm monsters milling about as you race above, around and through them. Not that you’ll get much chance to appreciate it because of the eyeball searing speed at which you fly past it all. It’s not called ‘Fast’ for no reason; at the default speed you’ll be able to appreciate the sheen on your ship and the gorgeous scenery for each track are great for sight-seeing, but that’s not going to help you win the race. To do that – in the words of Sonic – you gotta go fast. Dotted around the tracks are loads of little orbs which when picked up fill up a boost meter, and at any point you can tap into this by pressing the R bumper; this turns everything around you into a blur as you speed off down the track. It’s obviously inadvisable to do this with a corner coming up as the walls are kind of inviting at the regular speed, let alone when you’re going at 900 miles an hour.

It’s not just your boost either, as all around the place there are strips of blue and orange along the tarmac; hitting these will give you a temporary speed boost similar to what your basic boost gives you, but it isn’t quite as simple as that. Your ship can pass through two phases – blue and orange – done by pressing the X button, you’ll need to ensure your ship’s phase matches the colour of the boost strip otherwise instead of a boost of speed you’ll be slowed down to a comfortable driving speed that your instructor would be proud of. As well as this there are also colour coded jump pads that will send you flying up over parts of the track. Some of these are optional and lead to boost pickups, but some are vital as failure to hit, or assign your phase will result in you plummeting off the track for a restart.

There’s a lot of inconsistency in the racing though; the aforementioned restarts are a bit odd for starters. Upon falling off the track you’re placed at the nearest point to where you fell off, and this is obviously nearest the point that you would have landed if you hadn’t fucked it up (you idiot), but what can happen (and I’ve seen it a few times) is that it varies between actually gaining a place, or falling back five places. Then there’s the collision physics when boosting; hitting an opponent when boosting is supposed to send them into a spin, which when done from behind works without fail, however, it can be done from the side as well, although your success may vary as whenever I did it I failed to spin my opponent, yet they could do it to me with alarming regularity. I’ve finished nitpicking now. As far as Fast RMX is concerned it’s a solid, no frills arcade racer. The events are divided into speed classes, which are then divided into a series of mini-cups. Successfully clearing them with a top three finish will net you the next set of courses and a shiny new ship to pilot. You then rinse and repeat to grow your ship collection. Outside of that there’s your usual multiplayer mode, which can be done online, splitscreen or even in a local LAN. So, if you’re out and about with a friend, you can either both play on the one Switch screen with a Joy-Con each, or if you both have Switch consoles to hand play on your own screen.

After playing through four championships you’ll also unlock the extra Hero mode; it’s the same as the regular cups, but instead here you start with a full boost bar – the twist? It’s also your shield. You’ve got to weight up the risk/reward options between boosting and making sure you have enough protection for any collision you may suffer. The collectable orbs still litter the track, so your supply isn’t finite, but it’s a hearty challenge for anybody who thinks that straight racing is a bit dull, even if you are doing it at speeds approaching 1,000mph.

Fast RMX is gorgeous (I seriously cannot believe this is running on a tablet), slickly presented and fun. There are a couple of niggles that may frustrate, but they don’t really hamper the racing experience that much. Mario Kart 8 Deluxe is still over a month away, and while you may find your time on the Switch taken up by some other games you’ll definitely find that in Fast RMX there’s a decent racing experience waiting for you.

Certain racing inconsistencies
Might be too bare bones for some

It isn’t F-Zero, but there’s a good, fun challenge here for anyone with an anti-grav racing itch.