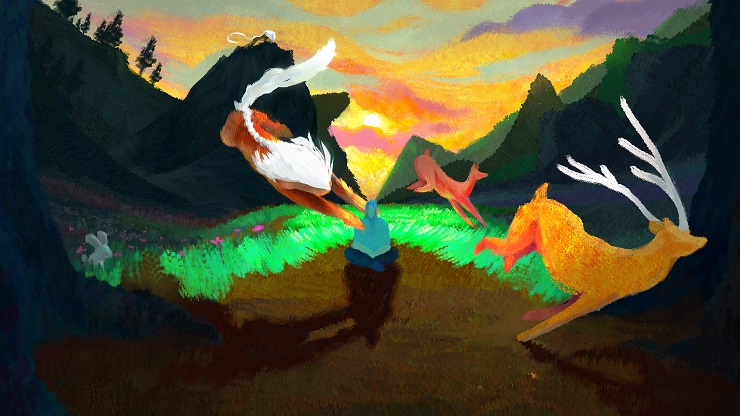 I look down upon a world of browns, greens, and reds and listen to the melodic sounds of gentle chimes in the distance. Suddenly, I appear in a flash sitting cross-legged on the ground. I’m alone save for a single rabbit hopping around the clearing. As I stand and take my first steps, I start to try and make sense of the world around me. The rabbit is a friendly creature and accepts the outstretched friendship with naïve willingness. I set off the to the East with my new friend in tow and come upon a wide lake, the water a brilliant blue contrasting the browns and reds of the ground and the autumnal mauve and red of the trees. Taking a moment to collect my thoughts, the ‘me’ that I can see below walking the earth takes a seat, sitting cross-legged once more at the water’s edge. A sense of calm washes over me as I watch the shadows of small fish below the surface of the water.

Deciding that I can’t wait too long by the water’s edge I set off circling the Southern edge of the lake and take notes of everything I see. Trees, small shrubs, rocks strewn every which way. Ahead of me is a create of fiery orange fur and a menacing look, and as I approach the beast rears up and gives chase. My fluffy white friend is lost in this encounter as I sprint further East past a stand of trees and the relative safety that it offered. Saddened by the loss of the rabbit, but accepting that this is an inevitable part of nature, I trudge forward determined to learn all there is about this world.

Ahead of me is a creature so white that it stood out like a rose in the desert plains, and as I approached it spoke to me without a sound. “What are you doing here?” was all it said. Then in a flurry of colour, the bright white creature disappears and leaves in its place a large glowing portal. I step inside. That was my first two or three minutes of Future Unfolding and it was an extraordinary few minutes. Not since Journey on PS3 have I ever felt the sense of true exploration in a game. It sets you up in a beautiful world, looking down on it as if you were a divine entity while controlling your humanoid through a world of natural mystery.

Inexplicably, each new game that is started is randomly pieced together with transitions like the rooms of a dungeon crawling experience. Nature offers you puzzles and various tools at your disposal, but these you must figure out yourself. There will be certain trees, rocks, flowers that stand out and offer a mechanic for you to play with; however, none of these will be explained in the slightest. This game offers you exploration in the truest sense of the world. Not just to explore the world, but to explore the rules of this world and things that you can do with them.

For example, some trees will allow you to vault over obstacles or onto high ledges, there are plants that change trees into rocks and rocks into trees, animals that lend you the power of teleportation, and some that will just try to kill you. The game sets you in this world with very little explanation, but through my time playing I found that finding spirit animals, such as the one above, often leads to opening portals that take you across the world to a far-off location. These animals also offer morsels of exposition about the world and history of the land – though this is something that I think is more for flavour than to add to any kind of overall narrative.

When I was first given this game to review, I was in the middle of another one so I installed it ready to go and gave it a quick play to test that the game worked before I came back to review it. This is something I usually do for 20 minutes, but ended up losing a few hours to the game. It pulled me in almost completely with its beauty.

The game sounds excellent, too. There’s a soundtrack of quietly soothing music of long gentle notes that serves as a calming influence. Coupling this with the attention to audio as you’re moving through shrubs or brushing past ferns and trees makes it rich without being overwhelming. While I fell in love with this game instantly and sunk several hours to it, there is a certain amount you can play at one time. There’s no story to lead your through and hold your hand every step of the way, but that’s also part of the appeal. You can pick it up at any point and just lose yourself in the exploration of the world without much need for any overarching goal or narrative thread to pick back up after being away from it for a while. It’s just there, and it’s waiting for you to explore whenever you feel the need.

There is no ‘best way’ to play this, other than in a quiet room with your headphones firmly in place and nothing to distract you. It’s a not-so-gentle reminder that sometimes games can be used as a relaxing, meditative medium when you want to step away from the tension and drama of explosions and high-octane, edge-of-your-seat action.

It won’t be for everyone and the ‘Games as Art’ sentiment is hugely subjective, but if you’re looking for something like Journey without a narrative or a thread to follow through the world – where exploration is your only directive – then Future Unfolding is an excellent choice.

Directionless not always a blessing

There is no ‘best way’ to play this, other than in a quiet room with your headphones firmly in place and nothing to distract you.