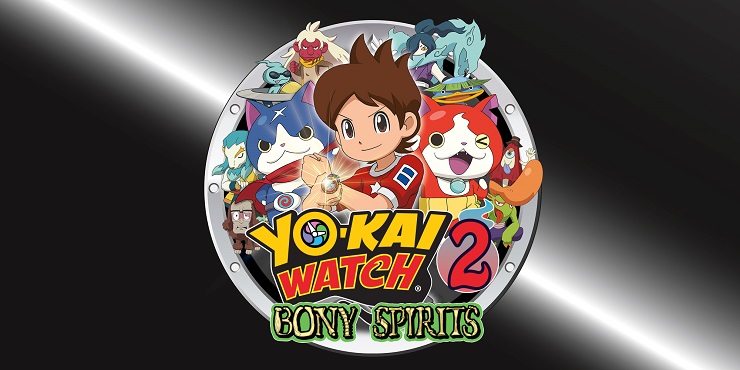 Have you ever felt possessed to do something you wouldn’t normally do? Like, have you ever had a nap in the middle of the day despite never doing so before? Or have you ever gotten hungry shortly after eating something? Maybe it’s something mundane like simply forgetting something right after it’s come to mind. If something like this has happened to you, it’s possible that it could be the work of a Yo-Kai.

Yo-Kai are little demons living alongside us in a spiritual dimension, they possess us and make us do things, some good, some bad – they’re mischievous like that. Here in the series’ second game there are two factions of them: the Bony Spirits and the Fleshy Souls, and they’re fighting over something, but there’s actually a big bad guy pulling the strings, making everyone dance like puppets, Dun dun DUN dun DUUUUUUUUUNN. Not all the chapters deal with this over-arcing storyline so at other times you’ll find yourself dealing with strange goings on at the local school, helping your friend find his watch or going to visit your Grandma.

It’s become cliché to say that a game handles it’s plot in the manner of a ‘Saturday morning cartoon’, but that’s exactly what Yo-Kai watch is, so I’m going to use it again. Yo-Kai Watch 2 feeds it’s narrative to you in a series of chapters that wouldn’t look out of place in a Saturday morning cartoon series; a thing is mentioned you go somewhere, plot unfolds, fight happens and the day is saved. Sometimes these are stand-alone stories, and others carry on from where the last one left off; in bigger games this would be off putting, but the nature of the characters and how these are put together allows the game to carry over the charm from the animated series. Thing is, this impetus on story compels you to keep pushing forward when really you do need to be getting on with side-quests. Due to there being no random battles in Yo-Kai watch you’ll find levelling your team using just the story quests can leave you floundering around the mid-game mark. The idea here is to ensure you seek out ‘Requests’ and ‘Favours’ from NPCs around the many towns you can visit, successfully doing what you’re told can net a big XP gain once you’ve handed it in. These little side quests generally turn you into a glorified errand boy running back and forth between regions (and later, eras) to get what the person wants. This is the dreaded grind that sets in on many an RPG, but here it’s present from the start.

It exacerbates itself as well, locking story content away until you complete what the game calls Key Quests; forcing you to take on the otherwise mundane tasks of certain people to further progress. Some of these are even further locked away behind a supposedly optional sidequest to upgrade your Watch from Rank E up to A. Doing so allows you to find and battle higher ranked Yo-Kai, but also allows access to areas locked behind lettered doors, some of which HAVE to be opened otherwise you can’t complete the key quests to move on. It should be noted that you should look to improve your Watch, especially if you want to ‘Catch ‘em all’, but locking content behind content and then locking that behind something else isn’t great design.

That said, the districts you are asked to make your way around are a joy to explore. There are a multitude of nooks and crannies for you to find your way to and plunder what lies within. All the locations feel like real places, with people milling around and going about their business, giving the locations a feeling of real, living, breathing towns. One places leads to another, which then leads to somewhere else; exploring has rarely felt as rewarding as finding somewhere you’ve not seen before only for it to look round and give you an alternate route to somewhere you’ve already been and they’re just full of boxes to open, Yo-Kai to find, items to pick up and adorable little secrets to discover. The way you do battle is interesting at least, in a different way. There’s a kind of hands-off approach to battling insofar as the Yo-Kai themselves will make their own decisions as to what they actually do. Your role is limited to telling them who or what to target, giving them items to boost their energy, removing debuffs through Purification or telling them to use their Soultimate move – a move that requires you to perform a task on the touchscreen to charge up before they unleash a devastating attack or immense healing wave. This is hard to get used to at first, but you soon settle into the rhythm, until it starts to get infuriating.

With no direct control over the Yo-Kai you can grow frustrated watching your team perform what you would consider to be the wrong moves. Frequently you’ll be in a fight against a weaker Yo-Kai and instead of attacking, a team mate will cast a buff or Guard, prolonging a fight which should take seconds or you could find a Yo-Kai healing miniscule amounts of damage, but ignoring a character about to fall in favour of debuffing the enemy. It should be said that you can give your Yo-Kai books to change their attitudes in battle, but the weird choices the AI makes still remain.

Yo-Kai Watch 2 is great for kids, at least thematically, but the overly grindy nature and frustrating AI in battle has me questioning how likely a child is to persevere. It’s probably safe to say that if someone enjoyed the previous game then what they find here won’t really put them off. There’s certainly a lot of charm here, with well designed, colourful characters, a fantastic world to get lost in and a story structure lifted direct from TV; it’s nice, but the battle AI and gofer style grind just let it down.

A kids RPG that’s kind of hard to hate, but the mileage may vary depending on how much said child likes to do as they’re told.

Yo-Kai Watch 2 launching in the US in September