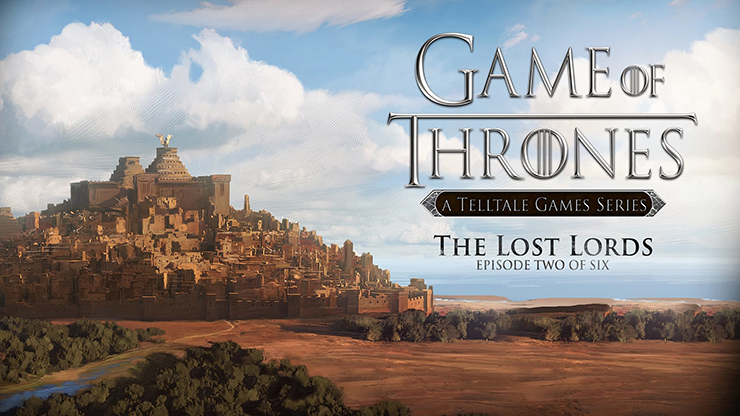 With Telltale Games’ Game of Thrones being so entrenched with the HBO television series, only read on if you have watched the TV show up to the end of season three and have also played Iron From Ice (Episode 1 of this series). Spoilers for The Lost Lords have been kept to an absolute minimum in this review. You’ve been warned…

As the credits began to roll on Iron From Ice, my mouth was agape as Ramsay Snow drove a knife through Lord Ethan’s neck. With Ethan Forrester being one of the playable characters, regular video game logic would tell you that he’s invincible, but that moment showed that Telltale Games would be treating their video game just like the TV show and the books: everyone is expendable. The Lost Lords allows House Forrester to spread its wings a little more than the first episode as celeb cameos aren’t as frequent and the Ironwood saga is fleshed out even further.

With the Whitehills wreaking havoc in Ironrath, Lady Forrester’s brother has been sent to fetch Asher in Yunkai, in an effort to build a formidable force for the impending war. Mira, at King’s Landing serving Lady Margaery, is worried about her family’s well-being and Gared Tuttle is on his way to Castle Black after being sent there for murder. As is the case with all of Telltale Games’ titles, to go into anymore detail about The Lost Lords would be to quash the joy as the element of surprise would be lost. Like most interactive stories, Telltale’s Game of Thrones will live and die by its narrative and it’s certainly telling a compelling one. With the likes of Lena Headey (Cersei) and Iwan Rheon (Ramsay) as standouts from episode one not showing up here, the likes of Gared, Mira, Talia and others must stand out from the crowd and aim to be as engrossing as the characters we know and love from the HBO series. In most cases, they do. There is a wonderful scene between Talia and another character early on, showing the effects the Whitehills have had on House Forrester, even before there has been any full-scale battle. Actress Molly Stone fantasically captures the childlike worry. Housemaid Mira is perfectly acceptable without progressing too much with regard character; some of that is due to the fact that her situation is similar to that seen in Iron From Ice, however, and we can expect to see more as the series progresses, I would think.

Our introduction to Asher is a memorable one. It’s clear that he is the tough, no-nonsense member of the family and a nice contrast to some of the more timid primaries. His involvement is minimal, though, and spending a bit more time getting to know the outcast of House Forrester would’ve added to the The Lost Lords. On the subject of outcasts, Gared Tuttle now faces a life with rapists, thieves, and murderers as part of the Night’s Watch. Arriving at Castle Black and having this sense of awe coming over you as you stare at The Wall is genuinely incredible. By far the most intriguing part of Episode Two are the sections where you control the former squire of Lord Gregor Forrester – and it’s the most gameplay heavy too. Getting to stroll around the brilliantly recreated grounds of Castle Black and practice your archery and sword-wielding skills is terrific and feels more involving than Telltale titles can tend to be at points. Now, even with the celebrity cameos being fewer this time around, there are still a few noteworthy inclusions such as Jon Snow, who is a member of the Night’s Watch. By leaps and bounds, Jon Snow is not only the weakest incorporated TV show character, he’s the weakest character of note in the whole ninety minutes to two hours. Actor Kit Harrington delivers his lines like a disinterested television superstar who has been contractually obliged to say a few words in a voice booth, which I can only speculate is exactly what happened. In that same token, Peter Dinklage’s performance of Tyrion Lannister is much of the same, if a little bit more flat, while Lady Margaery is a constant reminder of Natalie Dormer’s ability. The actress is oozing with class and regularly outshines whoever she is on-screen with, even if it’s for a short period. There are a few other notables, including one male character that has some really nice scenes with others, but the hole left by Cersei and Ramsay feels insurmountable. There are some very gripping moments with those from The Lost Lords, but even the cream of the crop can’t reach the heights of bastard Ramsay or Queen Regent Cersei.

As was the case in Iron From Ice, The Lost Lords looks very rough at points. Characters will be seen to have a glow around them and more terrible than that are the backgrounds. They will divert your attention because of how pixelated and out-of-focus they are, when you should be concentrating on the dialogue and mannerisms of the characters. I’m sure they’re trying to make the backdrops have this glassy-like effect so that you will be engulfed in the story and not look at interiors of houses, but it’s backfired. When the scenery looks as it does, your eyes are naturally drawn to it because it stands out. I had hoped this design choice would’ve came and went with episode one, but that doesn’t seem to be the case.

But Telltale understand George R.R. Martin’s work. They understand what HBO have done with said work. Currently, they’re crafting their own story within the confines of A Song of Fire and Ice’s lore and doing so very well. While the first episode’s highs were ever so slightly higher and visual issues remain a real sticking point, the foundation for a narrative that can stand on its own against the books and the TV show is here.

Note: Xbox One version also fully tested. HIccups were noticed during “previously on” and “next time on” segments, and during the opening playable scene there was slowdown.

While Cersei and Ramsay's omission is felt and backdrops still haven't improved on episode one, the story remains strong and Castle Black sticks out as a big highlight for Game of Thrones fans.