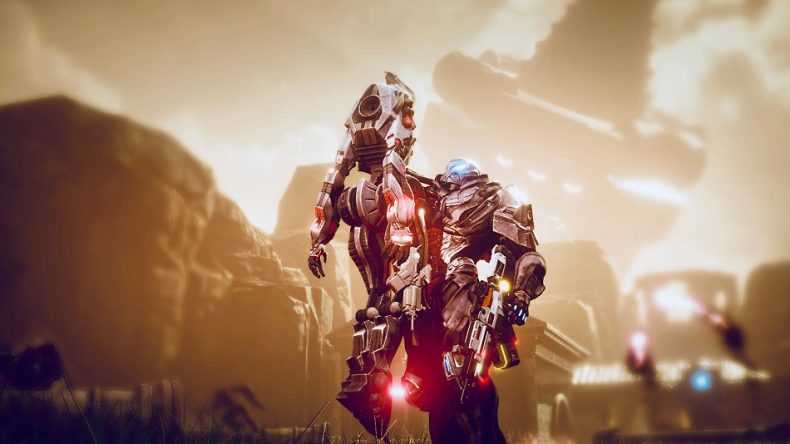 I’ve got a lot of time for indie developers. It can’t be easy, working with a limited budget and a small team, and it must be a daunting prospect to release your creation into the world with little to no real backing. But this in itself begs the question of why, with today’s market the way it is and today’s games press the way it is, you would release anything as shockingly poor as Gene Rain.

I mean, look, I don’t want to be a bully here. Deeli are a small Chinese studio and they’ve obviously set out with a fairly ambitious plan, but the result of such a low quality you have to wonder how it was even approved for release. Essentially Gene Rain is a Gears of War clone; everything appears to ape Epic’s testosterone-fuelled cover shooter from the “roadie run” to mapping reload to RB. Even the weapon selection and ammo pick-ups are direct lifts, as is the unintentionally hilarious combat roll that resembles an acrobatic halibut avoiding traffic. The problems begin immediately, with subtitles riddled with punctuation and spelling errors and some of the weirdest dialogue going thanks to poor localisation. The plot is almost utterly nonsensical, to the point that you appear to switch protagonist regularly and I have absolutely no idea why. Cringe-worthy attempts at humour fall flat because every line is either shouted or dead-pan. Add to this the fact that the ambient soundtrack is completely off-kilter (even footsteps are out of time with the walking animation), and Gene Rain become as hard to listen to as it is to watch.

Graphically speaking, I’ve seen better in mobile games from 2010. Environments are lifeless and bland, animation is stunted, and judders thanks to relentless performance issues. Low-detail textures and shoddy effects reduce what should be war-torn battlegrounds to drab, featureless arenas.

It’s rare that I play a game that has so little going for it, but Gene Rain suffers in pretty much every area. The shooting is imprecise and impact-less, while death is often unavoidable thanks to stutter movement, a horrible cover mechanic and regular glitches. When you do die, you’re just given the option of restarting the mission or returning to the checkpoint. There’s an auto-aim, here called “AUXILLARY COLLIMATION” for reasons best known to Deeli, but it’s as imprecise as the rest of the game. Occasionally enemies appear that are literal bullet sponges, and God help you if you get close enough to need to rely on the melee attack.

I could go on and on but it would be unfair. There’s nothing whatsoever to recommend here, even to the most die hard cover-shooter fan. It’s a broken, buggy, disjointed mess. Perhaps the biggest plus point is that it’s mercifully short at around 4 hours long. I only hope the feedback on it is enough to steer Deeli in a better direction should they make a second game.

A poor attempt at a Gears of War clone that gets almost nothing right.