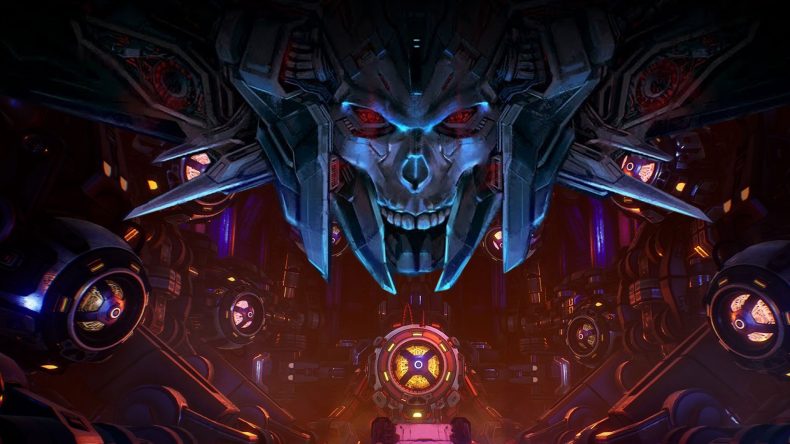 There’s something remarkably appealing about Mothergunship’s hearty combination of simple arcade gunplay and complex weapon crafting. It’s a game of catharsis, somewhere between, say, Borderlands and Serious Sam. Objective couldn’t be more straightforward, and it’s rarely taxing on anything but the trigger finger.

Earth is at war with a race of killer machines in Mothergunship’s tongue-in-cheek future, and you are a nameless soldier given the thankless task of leading a solo assault on the Archivist fleet. Your objective is simple: destroy the fleet one by one until you get a shot at the Mothergunship itself, and then save the Earth.

This is to be achieved by the judicial application of firepower to the face, as you triple-jump and strafe-shoot your way through corridor after corridor until a boss fight presents itself. It sounds dull on paper, but there’s a truly therapeutic thrill to the gunplay. Movement is fluid and fast, the guns (and we’ll get to them in a minute) have weight and impact, and the enemies are varied enough to always keep you on your toes. Essentially, this is a first-person bullet hell, and your primary concern is staying alive. You do this by killing the enemy quicker than they can kill you, and you do that by constructing bigger and better guns. This is Mothergunship’s USP, and it’s a doozy.

So it works by rewarding you with gun parts at the end of missions, or allowing you to buy them in workshops dotted throughout each level. At the same workshops you can deconstruct your guns into three constituent parts: Connector, Barrel and Cap. The first part, the Connector, determines how many other parts you can add to your weapon, the Barrel determines the type of gun (heavy blaster, grenade launcher, shotgun, etc), and the Cap adds different modifiers like precision damage, etc. Although you can only take a certain amount of parts into a mission, you’re effectively only held back by imagination and the bits and pieces at your disposal. For example, I spent a whole mission rocking a shotgun strapped to a rocket launcher, while from the other hand I was firing balls of fire that bounced around the room like crazed comets. There are rocket launchers, railguns, energy blasters, spiked ball launchers, laser beams, alongside others – and you can mix and match to your heart’s content.

Most missions require you to fight through a horde of turrets, drones and robots to reach a self-destruct button. The humour is very self-aware, highlighting said button with a big sign declaring that it is definitely not what you’re looking for. Within the randomly generated mission areas there are special rooms, marked with different motifs, denoting various challenges such a killing enemies in a time limit, for example. These rooms off a little flavour (and goodies), but don’t do a great deal to alter the pace or structure. The inherent humour extends to the dialogue, as the Colonel and Wilkinson, your two mentors slash handlers, are either constantly bantering or else hitting you with deliberate clichés and daft one-liners. Mothergunship knows it’s a game and is totally unashamed of the fact. Early on, for example, the AI that runs your ship is infected with a virus, and spends the next few missions bombarding your hub with offers of free vacations, discounted shampoo and cheap gym memberships. It may not be terribly original, but it made me smile.

The hub is pretty useful, too, as you can not only play around with gun builds, but can also spend XP to upgrade your battlesuit. It’s RPG-lite, improving things like movement speed and maximum health as opposed to anything deep or unusual, but it’s still a nice way to make you feel you’re progressing.

It’s not perfect, however. Movement is quite limited, as you can only strafe and jump. Also, your damage feedback is piss-poor, so you’ll rarely know you’ve been hit until the screen starts flashing red and you’re about to die. It would have been nice to see a bit more variety in the missions and environments, too, as both the objectives and the game areas can begin to feel a little samey in large doses.

All that said, Mothergunship is a refreshing example of a developer setting out to make a game fun and succeeding. This is totally unpretentious and utterly entertaining, giving you just enough variety and creativity to keep you playing with gun builds and experimenting, and a simple enough mission structure that you simply don’t get bored jumping into a five-minute firefight and unloading your brand new Frankenstein’s monster of a handcannon on an army of killer turrets. It’s loud and explodey, but hugely cathartic at the same time. Recommended for every shooter fan who misses the old school rush of shooting the hell out of stuff until it’s dead.

Bad damage feedback
Not much mission variety
Environments can be samey

Video game therapy has never been so explodey. Mothergunship is a funny, exciting and creative take on an otherwise simple premise.

Watch our gameplay footage for Mothergunship in a new Show & Tell

MOTHERGUNSHIP releases on PC and consoles on July 17

Build your ultimate gun with the MOTHERGUNSHIP Gun Crafting Demo