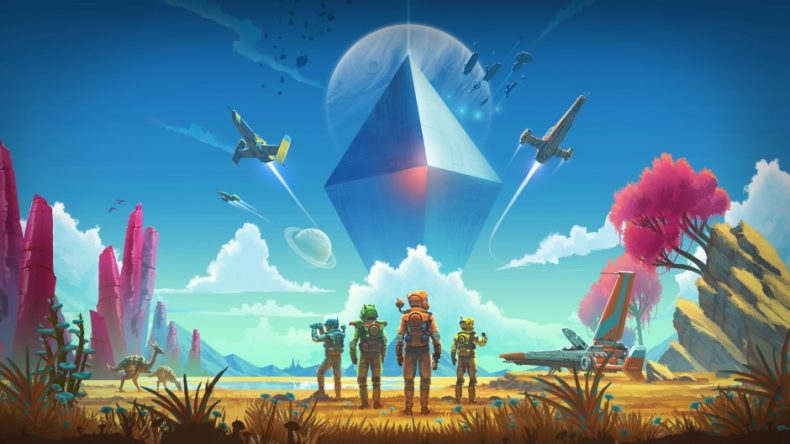 Many of you know the story of No Man’s Sky‘s development, so I’ll spare you a recap, however, the crux of it was we were promised more than was delivered on release and it’s hurt its developers ever since. Most would disappear off the face of the earth and in time announce redundancies and the cancellation of online support, but Hello Games has been hard at work with the sole aim of delivering a game that lives up to the hype it received way back in 2016, after countless complaints and a humongous shift of attention onto every other game but No Man’s Sky from gamers worldwide.

With the latest update – titled NEXT – we have been given something that feels complete, or at least a game worthy of your time. It was never terrible, but it was certainly a baron and empty experience after a 15-20 hour stint. Whilst it isn’t perfect, NMS has a lot to offer, and after all the updates since its initial release, I felt compelled to go back, time and time again, and that in itself tells you it’s much better.

One thing has stuck since the beginning, and that’s the grind involved in collecting the minerals and materials needed to do anything. It had been some time since I’d played, so when it came to diving back in I started from the beginning. Like before, after fixing your ship in order to explore the galaxy, the overhauled building and crafting system has had changes for the better, but there’s much more to learn from scratch. It never felt as difficult before whereas now there seems to be a lot to take in. If you give it your time there’s great reward in getting your first hyperdrive and warp cells to be able to jump from galaxy to galaxy, but as you need to refill your spaceship’s fuel every time, the reminder that grinding is a constant and long process kicks in. You can now carry more stuff, but having to do so was never something I enjoyed. It’ll take hours until you can even think about building anything, and even then you have to scour the planets looking for resources. It’s a repetitive slog, collecting, refining, refuelling, and such that it takes away some of the enjoyment of the things it does so well. One of the great things about NMS now, is there seems to be so many missions for you to embark upon, and once you have your base built there’s a mission path that helps you to turn it into a fully functional structure with added Overseers to look after it, as well as other missions scattered around the galaxy.

Whilst base building was added a while ago, there’s more to make, and with the big draw of the update – the multiplayer – friends can help contribute to your base. Whilst having friends in your game is great, any resources you find cannot be shared, meaning if you find it nobody else can use it. It’s not the be all and end all, but it’s something that might frustrate some players.

When it comes to exploring with friends, there’s nothing quite like it. You can visit each other’s base or home planet, explore any planet you like, and travel around in spaceships flying around in space with such freedom, and the ability to chat to each other whilst doing it makes the grind a lot less of a chore, but a task you can complete whilst having a laugh at weird shaped planets and animals, or anything else that tickles you. You may encounter the odd bug like I did, such as framerate issues or certain things resetting themselves like the door to my facility resealing itself so I had to break its seal again. A minor thing maybe, but there was no reason or need for it.

What NEXT has done is improve the visuals of almost everything. Planets can be beautiful, filled with colour and exotic widlife, glistening oceans and glimmering rings surrounding the entire planet. There are still lifeless, grey planets as well, but the chances of stumbling on either type is completely random. I travelled across various galaxies and found a lot of different planets, many alive and beautiful. It just depends on where about you spawn across the billions and billions of planets. There’s a lot more detail in both flora and fauna, and the storms that randomly occur are just as stunning as they are dangerous. The addition of third-person makes NMS feel more engaging, as watching your player builds more of a connection between the experience and you, giving you the opportunity to see yourself on screen, fighting the odds or allowing a photo to be taken with you overlooking the great unknown. All of these touches makes the grind feel less overbearing as there’s always something to do providing you have the right resources to get to where you need to.

The technical difficulties seem to span to other aspects of the voyage, such as transporting from base to space station and back. I got a screen cut into half a screen frozen screen of the image and black screen, followed by an annoying buzzing sound that also pops up when you leave a planet’s atmosphere almost every time.

Whilst it still isn’t the game I thought it was always supposed to be, No Man’s Sky has definitely improved. I adore the creative mode and spent a lot of time building up my base, mainly because it gives you all the parts you need. Survival mode is tough, but every new unlock for your multi-tool, exosuit, ship or base feels like a real achievement, and if you have hundreds of hours to put in, the cathartic experience paired with the choice to explore with friends makes the current experience found in No Man’s Sky today a worthwhile opportunity to fall in love with the stars all over again.

Read our original 2016 review of No Man’s Sky.
Liked it? Take a second to support GodisaGeek.com on Patreon!

If you're new to the game it's going to take a lot of time to get past the surface scratching, but once you've caught up there's plenty to love. And if you're coming back to No Man's Sky, things have changed quite a bit, but embrace it and explore with much more of a reason to.