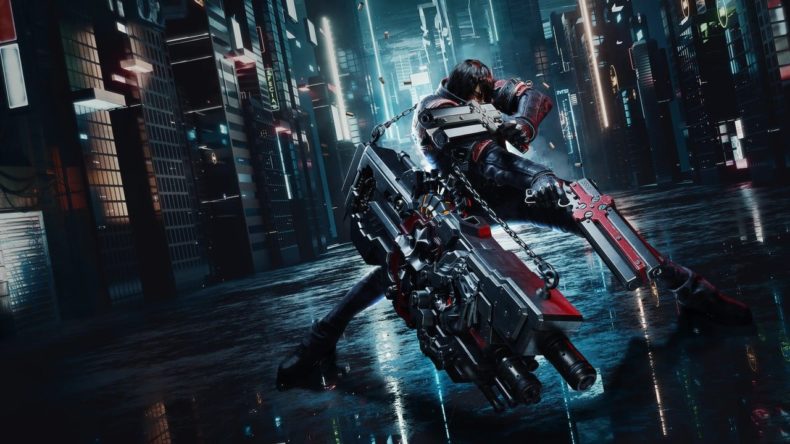 I vaguely remember Gungrave and its sequel from the PS2 days; gloriously over-the-top third person blasters that offered cathartic violence over any form of depth. Twenty years on, and Gungrave G.O.R.E revisits Ikusabune’s madcap franchise with an incredibly faithful threequel. It’s so faithful, in fact, that it hasn’t changed much more than its shoes.

G.O.R.E (Gunman Of REsurrection, seriously) picks up more or less where 2017’s Gungrave VR left off, with a handy recap to catch you up if you missed the original and its sequel. Narrated by a young girl named Quartz, the story joins a mercenary team who are infiltrating the headquarters of Millenion, manufacturers of the drug Seed. This team is comprised of the boss, Mika Asagi, and our Protagonist, Beyond the Grave, or simply Grave, a resurrected instrument of death also called a Deadman. 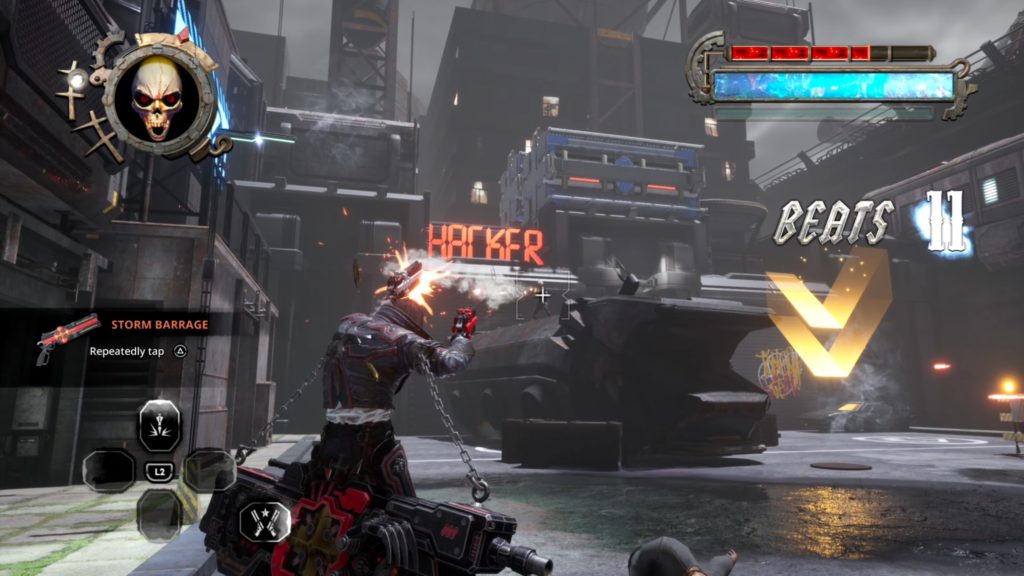 I’d like to pretend I understood most of it, but truthfully, even with the recap, the story relies heavily on knowledge of the previous games and the more recent VR outing. Thankfully, the primary gameplay is entirely focused on putting bullets in people as quickly as possible, so the story doesn’t exactly need to shine.

Grave has the personality of a tombstone wrapped in leather and chains. He says nothing, and walks like a pissed off gorilla dragging a Volkswagen behind it. The “coffin” on his back is actually a weapons case that enables Grave’s multiple special moves, extravagant attacks that use up points earned by building the Beat Meter.

The gunplay is interesting. You don’t need to aim Cerberus, Grave’s twin hand-cannons, as the lock-on is very generous. Holding down the trigger will charge a special sniper attack, while tapping it when stationary will cause Grave to fire a rapid flurry of shots at anything in front of him. Charging up a separate meter allows Grave to execute the Storm Barrage, a special combo that supercharges each shot and does higher damage as long as you’re not interrupted. There are various combos and special abilities to unlock in the Lab between missions. 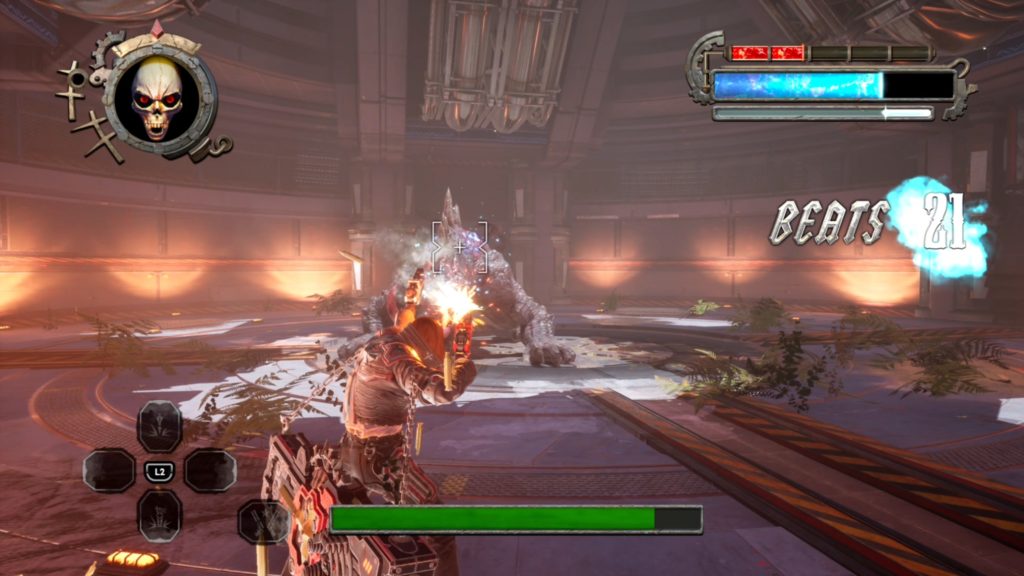 Stages are incredibly arcadey, as you lope along corridors like an emo guitarist on steroids, using your coffin as a rudimentary clobbering stick to knockback enemies or, amusingly, bat missiles back at their launcher. Enemies just kind of pop in through side doors, often swamping you and forcing a tactical dive-roll or seven. When there are bad guys, your only job is to mash them into bits until there’s no one left. Physics are a problem for someone else, as body parts and bullet holes vanish, water barely splashes, and most enemies will walk right through gunfire until they suddenly explode like a kid’s toy.

That this game is designed for a very specific, pre-existing fan base is evident throughout. The music is borderline unbearable at times, thrash metal screaming over the endless gunfire and explosions. Walking in water sounds like a shotgun going off and the stylish execution moves never vary: Grave just headlocks an enemy and blows their brains out, no messing. You can hook enemies and pull them to you, or grapple at them, but the collision is weird every time.

Enemy variety is pretty decent, at least as far as archetypes go. Every member of a particular type is identical in every way, from the big guys who shoot fire and acid to ninja types that can turn invisible, and even the standard cannon fodder. There are some weird beasts here and there, but they’re rendered in the same slapdash, half-arsed way as the rest of the enemies. 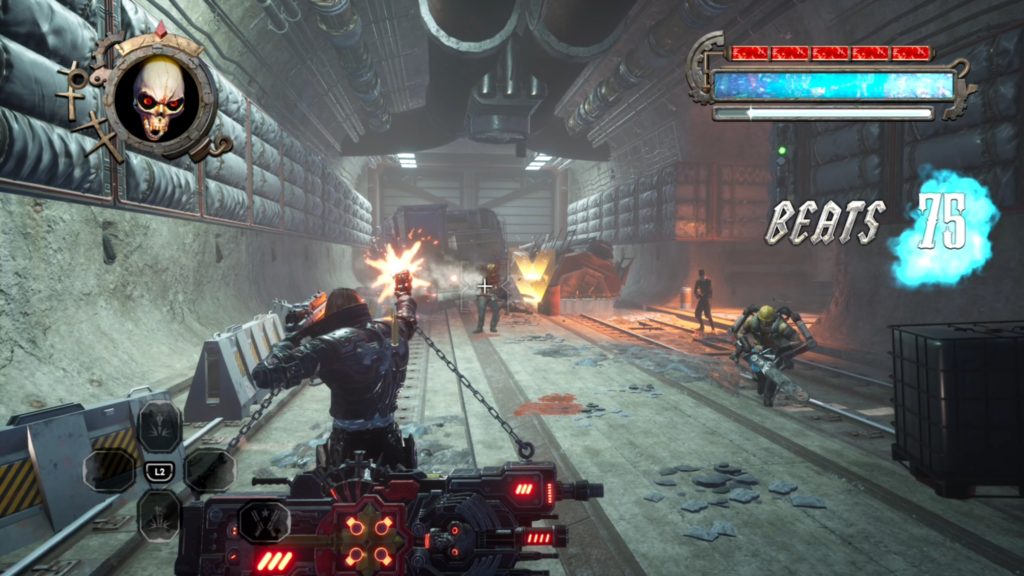 It’s difficult to truly critique a game that’s so unashamed to be what it is, and fans of the original games will absolutely buy into this. Gungrave G.O.R.E hasn’t evolved a single inch since 2002 outside of the visuals, which are passable in gameplay and very decent during cutscenes. It doesn’t look like a PS2 game anymore, but it feels like one through and through.

Boss fights pop up every few stages, and are the only real challenge once you’ve got Grave’s movement and cooldowns worked out. Sadly, though, they’re a challenge for the wrong reasons. You’re too slow to dodge their attacks, for a start, and there are often no goons to execute for a quick shield recharge.

Gungrave G.O.R.E isn’t a bad game at heart. It’s a clear ode to the PS2 era, with almost no modern trappings at all. If you reskinned the first game, you wouldn’t tell the difference by mechanics alone. For fans that’s a good thing – this is likely more of what they want. For anyone new coming to this, enamoured by the metal-as-fuck trailers and the promise of balletic ballistics, the result may well be less impressive.

Janky, cumbersome movement, repetitive action, a nonsensical story and a soundtrack that embodies early-noughties teenage angst can’t take away from what is, at its heart, a fun, fast-paced arcade shooter. There’s catharsis to be found here, for sure, but Gungrave G.O.R.E is no modern masterpiece.

Gungrave G.O.R.E isn't a bad game at heart. It's a clear ode to the PS2 era, with almost no modern trappings at all.