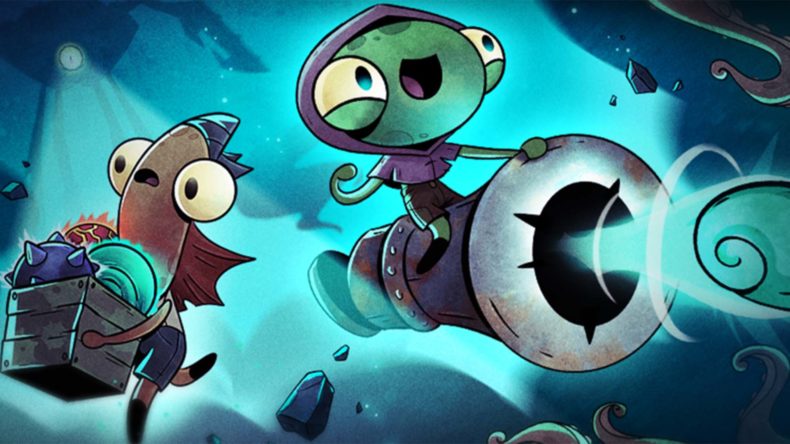 One of the first cooperative games that my partner and I really got invested in was Sea of Thieves. We’d spend hours sailing the beautiful world that Rare created, and those frantic moments trying to keep our ship afloat against a variety of sea creatures and other pirates were just magical. Eventually those moments became too rare and we moved onto other experiences, but we both continue to reminisce about those special days with glee. Ship of Fools brought us back to those glorious sailing days together, without any of the boring fluff that made us give up the first time.

The Great Lighthouse is no longer shining in the world of Ship of Fools, and because of this the ocean is a more dangerous place than ever before. The only hope for the other sailing citizens is if two tiny fish people sail into the darkness and stop the evil ruling the sea at its source. That’s where you and a buddy come in, so prepare the cannons and get on the boat already.

When you set off on your adventure you’re presented with a hexagon based map of the sea, full of little symbols that show you what you’ll get if you travel there. Each time you move to a new hexagon a wave of wet nasties will emerge from the depths, and you’ll need to protect the boat if you want to keep afloat.

Combat in Ship of Fools involves loading your cannons full of whatever ammo you have on deck, and blasting the enemies before they have a chance to deal any damage. The birds, fish and crabs that want to pluck you out of the ocean can approach from either side of the boat, so you’ll need to pick up and carry the cannons between sides (or orchestrate your offense as a team) to take them all out. 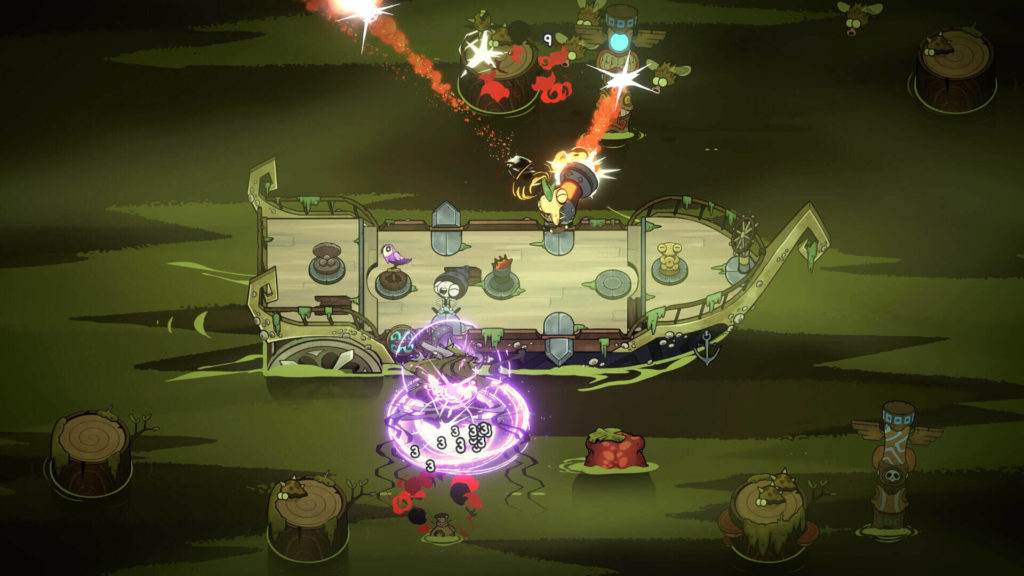 What’s really clever about Ship of Fools is that the enemies almost never directly damage your ship, and instead either move in close before striking, giving you an opportunity to repel them with your paddle, or leave a pile of fire on the deck for you to waft out. This means when things get a bit hectic you’ll both be running around trying to put out fires while the enemies keep wailing on you, and the sheer panic is honestly exhilarating.

If you do take damage you’ll need to repair it with wood, which can be found on your travels. Other loose collectables include sand dollars to spend in stores, shields that give you temporary health and harpoons which you can use to pluck loot out of the ocean. Keeping these supplies at hand is key if you want to complete a successful run and fix the Great Lighthouse, so try to choose the path that gets you the best supplies.

Yes I said successful run. You see Ship of fools is actually a roguelike. Now before this sends you running for the hills, there’s plenty of permanent upgrades that will make you feel the power boost even in failure. This also means that every time you set off there’s a new experience awaiting you. Who knows what you’ll find on your adventure to slowly upgrade your ship this time. It’s all part of the fun. 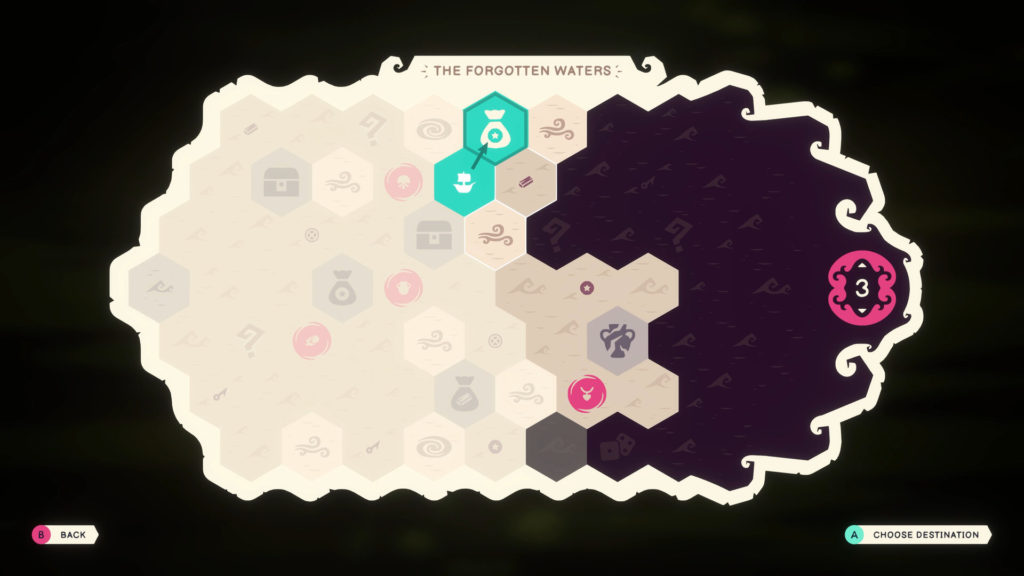 The main difference in each run comes in the form of the ammo types you find. Each type of projectile you find has a different benefit, from rapid fire ammo that doesn’t need reloading as much, to piercing ammo that can take down crowds with ease. My favourite were the oil barrels that soak foes with a weakening oil that means they take even more damage after the first hit. Experimenting to find your favourites is a lot of fun, and makes each run feel unique.

There are also passive upgrades you can add to the ship (giving you things like more health or extra money over time) and bombs that have a limited use. Each power up you find has to sit on one of the pedestals on your ship before you move onto the next hexagon though, or it’ll fall into the briny depths as you speed off. This means you’re always making tough decisions of what upgrades are more important, and it led to some big discussions when we thought a run could be “the one”.

Against some of the tougher enemies and bosses you’ll really need to have your pedestals in order, because this game gets tricky. There are enemies that stun your characters if you don’t dodge roll through their lasers (leaving the ship to get battered in your absence) enemies that send smaller minions onto your ship that need taking care of, and even enemies that try to move your items around. Getting used to the variety of evils in each of the games’ zones will take some doing, but once you know what’s coming you’ll be prepared to save the day.

There are plenty of other elements I could wax lyrical about too. I could talk about the trinkets that provide passive buffs to a single one of your characters. I could talk about the different cannon types you unlock as you progress further into the runs. I could even talk about the nice variety of unlockable characters and the clever ways you have to unlock them. But really all you need to know is that Ship of Fools has all the depth of your favourite roguelikes in a lovely (and accessible) roguelike package. 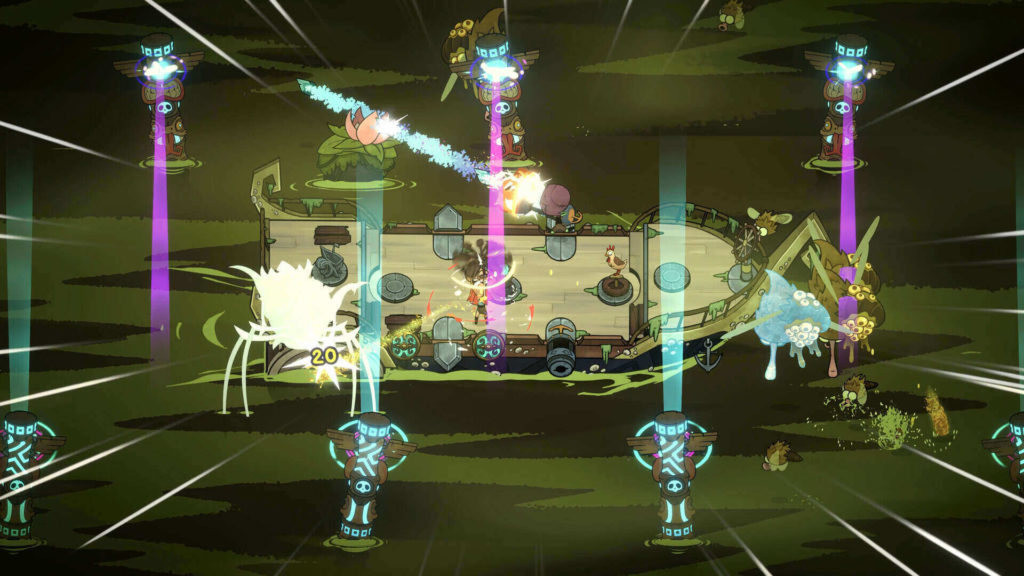 I should also mention the lovely visuals and sensational soundtrack too. The cartoony aesthetic is absolutely charming, and each fish-based NPC you meet just oozes character. The soundtrack is also undoubtedly one of the best of any game this year, with catchy tunes for each world and some absolutely killer boss themes to top it off. Ship of Fools really is the total package.

Ship of Fools does have one issue though that means we ended up stopping playing it after we beat the game. Once you get to the point of beating the final boss consistently the runs will start to feel a bit repetitive. Sure the upgrades you get are different, but all the enemy types and bosses are the same no matter what happens, and with only three worlds to explore you’ll be used to them all before you know it.

Ship of Fools is a fantastic co-op roguelike full of tense battles and tough decisions. Learning how to best all the enemies and what upgrades are the best is exciting from start to finish, and the audio and visuals are top notch. It’s a bit of a shame that you can master it as quickly as you can, but when the screen fills with enemies and the boat fills with holes it’s an exhillerating experience you’ll want to share with your loved ones.

Ship of Fools is a truly exciting co-op roguelike, with frantic action. plenty of upgrades to enjoy and a banging soundtrack