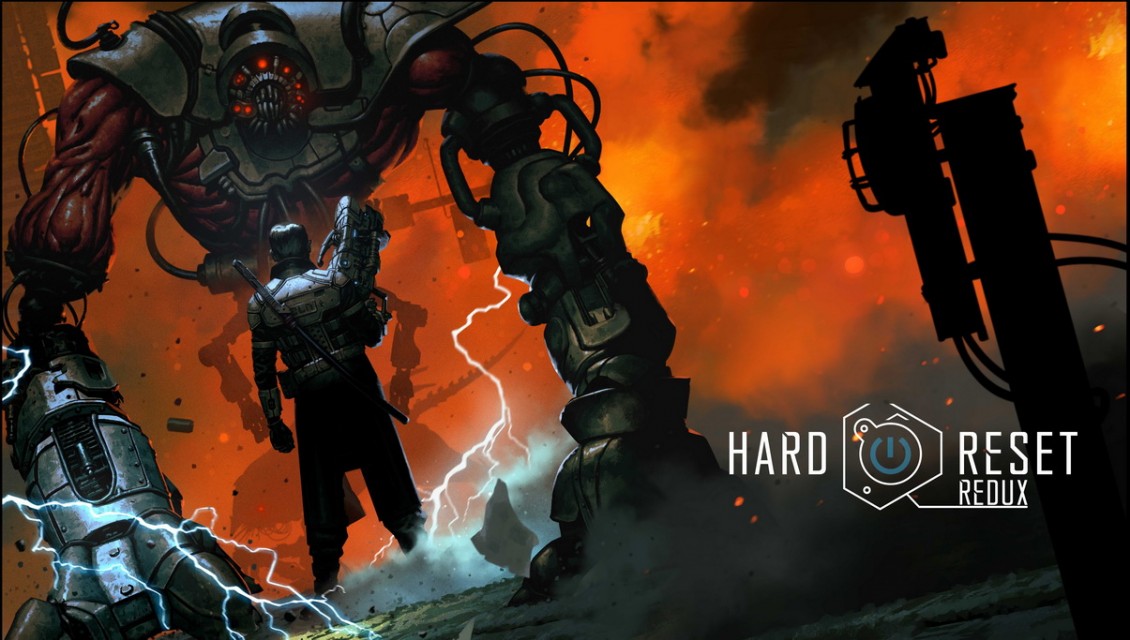 Hard Reset Redux is a game about blowing stuff up, and it makes no pretences that it is anything but a game about blowing stuff up — all while offering you some really effective ways to do so. Explodable objects are littered around the arenas you shoot stuff in, and if it doesn’t blow up, it will electrify your enemy to allow you time to blow them up some other way. Nothing escapes.

There is a story, apparently, or at least I think there is. The cyberpunk Bezoar City (which looks like a place straight from the fever dreams of Philip K. Dick) is presented to you via a sequence of comic book shorts but thankfully, for those who want to get straight back to blowing things up, they are skippable so you can return to the action as soon as you want to.

The old school roots are apparent to see and Hard Reset displays them proudly. There is no health regeneration, rather you have to blow stuff up to get your enemies to drop health pods, or you can blow stuff up to reveal hidden rooms where level unlocks and health pickups are available. You will also need to blow stuff up to find ammo packs for the two guns you are equipped with. Your tools for blowing stuff up are fairly minimal: you have a traditional gun that fires bullets, and an energy weapon that fires a kind of plasma; however each of these weapons can be altered and modified within the levels to mix it up a bit. The upgrade tree is an interesting addition which, once you have managed to unlock a few elements, lets you switch up your attack on the fly depending on what the battlefield dictates at that time. Close quarters? You can change your plasma gun to fire bolts of electricity that will stun and hold your enemies in place for a short time allowing you to switch to a shotgun for one-shot kills, or an RPG to blast multiple enemies at once. Longer range? You can switch to a rail gun for more precision or use the secondary mode on your plasma gun to fire single, high-damage blots of electricity at your enemy. The flexibility to change the way you approach each arena in later levels does much to add variety to what you are doing.

The enemy types are not plentiful, and you’ll only really find a handful of enemies as you progress through the game. They may develop razor-like propellers or become small walking bombs in later levels, but in the main the difficulty and challenge comes not with facing new enemy types, but rather with having to deal with greater numbers of enemies at one time. Sometimes it will throw a mini boss at you as well as a horde of the smaller common enemies meaning you will have to constantly strafe and move around to avoid getting overwhelmed. Thankfully there is almost always a canister nearby that you can focus fire on to blow up everything in your path. Blowing stuff up is extremely satisfying, but the shooting is at times a little weak. There is very little feedback to show that your endless bullets are actually making contact which, when it comes to a boss fight, can be a bit of an issue. Boss fights use some tired mechanics where they are just bullet sponges with areas that are weaker to damage, which wouldn’t be that much of a problem if the arenas in which you carry out these fights were a little more varied, or offered some means of strategy other than hammering them with everything you’ve got whilst constantly strafing. In addition, the larger boss fights resort to having two or more phases to get through and with the lack of any strong feedback that your bullets are actually connecting on the enemy hotspots, it makes the fights a little annoying — especially on harder difficulties. Thankfully, there is a generous auto-save system that saves after each successful boss stage so if you do fail right at the last minute, you know you won’t have to start all over again.

After each stage or sequence of objectives is complete you are presented with a score for that level. The difficulty you completed it on will provide a modifier and there are some secrets to be found in each level which will encourage you to explore a little bit. It is clear that the developers want to encourage multiple playthroughs to improve on your score and find all the collectibles and there is just enough in the game to warrant that. The environment and enemies do grow a little tiresome towards the end in their lack of variety, but if I haven’t already mentioned it: blowing stuff up is extremely satisfying.

Hard Reset has a story which drives you forward, but ultimately it is a fun shooter where blowing stuff up is all that matters.