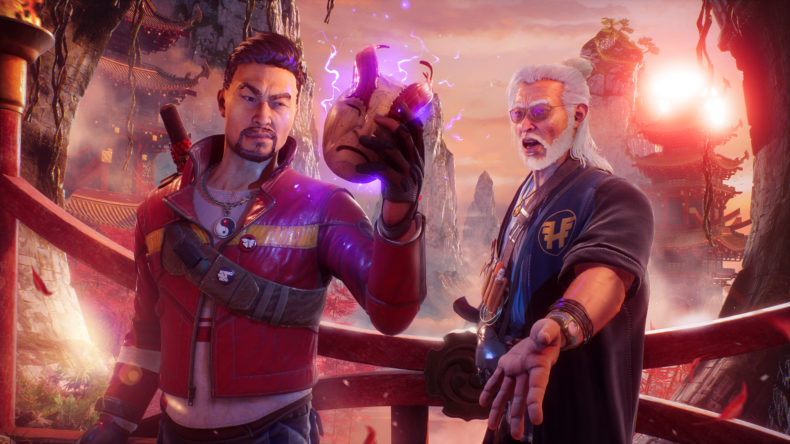 Humour can be a great tool when applied in the right way at the right time. It can diffuse tense situations, bring out a smile in a moment of tragedy, or unite people through shared joy. As evidenced in Shadow Warrior 3, it can also be deployed as an offensive weapon with which to relentlessly bludgeon people until they either become numb to it or start laughing out of nervous habit whenever developer Flying Wild Hog raises a hand.

Shadow Warrior’s one-note comedy arguably became rote before the first game ended, its cultural misappropriation raising eyebrows more or less from the get-go. The main character’s name is Wang, after all, which Flying Wild Hog might once have assumed was a bottomless pit of killer gags. In 2022 however, they have had no choice but to tone it down. Wang is now voiced by Asian actor, Mike Moh, and there are fewer jokes about the fact that his name is a funny word for penis. 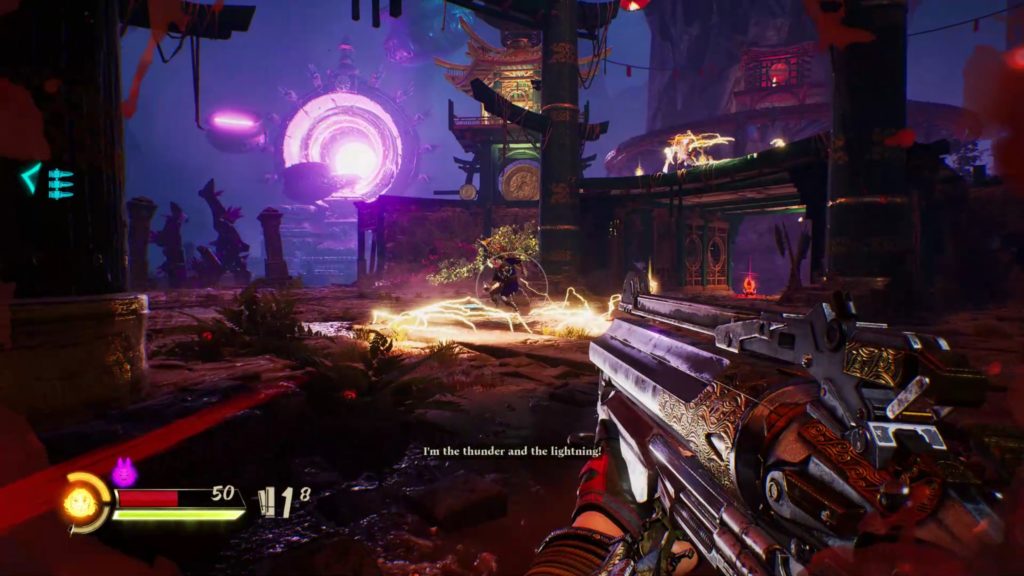 Sadly, that leaves very few things to actually laugh at. Wang himself is a total idiot who just happens to have a superhuman grasp of his own motor skills. A highly trained ninja with a Jack Sparrow level of situational good fortune, Lo Wang is equal parts unstoppable badass and dribbling cretin. While I’ll give props to the writers for giving him such a massive array of things to shout while eviscerating demons, I’ll also take the same props away for wheeling out such uninspired non-exclamations.

“That’s a face only a mother could love!” he yells at one enemy as he reduces its upper body to smoking lasagne. Another quotable classic was “That’s what I call a PowerPoint presentation! I point, you die!” But while it’s cringeworthy, it’s also indicative of Shadow Warrior 3’s intended tone. This is a game that refuses to take itself seriously, and it’s actually incredibly refreshing.

It picks up more or less where Shadow Warrior 2 ended, with Wang and his former enemy Zilla attempting to defeat the enormous dragon they unleashed. However, Zilla’s intentions clash with Wang’s, as the former intends to sacrifice the spirit of Wang’s friend Hoji to save the world. As impulsive as ever, Lo Wang steals the mask in which Hoji resides and legs it. With demons and Oni unleashed on the world, Wang is in a race to prevent the apocalypse in a way that doesn’t involve the sacrifice of his friend. 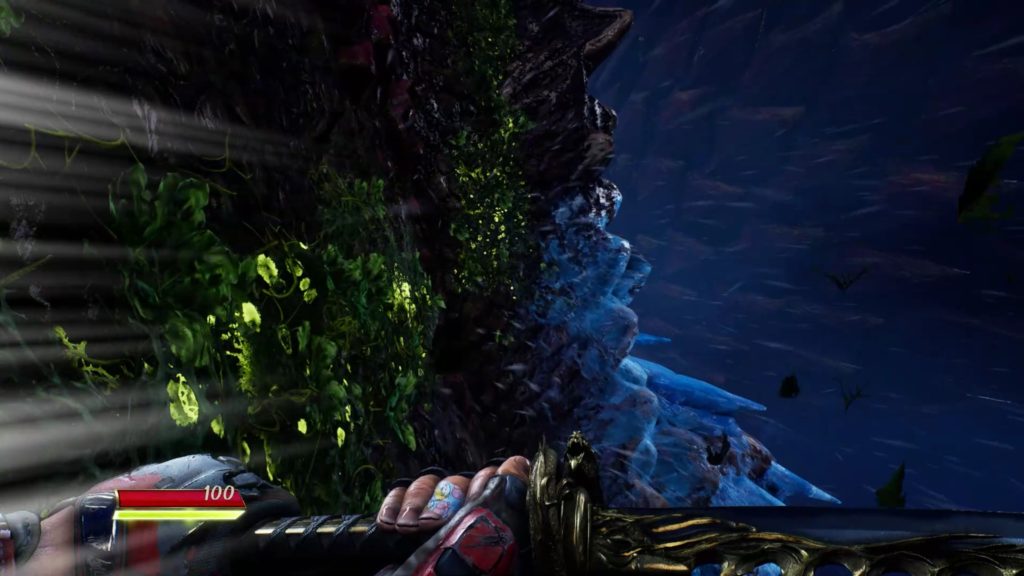 Anyone expecting a structure similar to Shadow Warrior 2 may be disappointed. The between-mission hub is gone, as are procedurally generated levels, bounty missions, and a good portion of the upgrade systems. It’s in service to a more linear, story-driven experience, designed to be torn through in around 10 hours. There’s no open world, no scattered collectibles beyond upgrade orbs, and only 6 weapons which you’ll unlock before the halfway point.

All weapons, including Wang’s katana, can be upgraded 3 times using upgrade orbs. Wang himself can also be upgraded, to take and dish out more damage. Early on you’ll receive a grappling hook, which becomes the source of a few self-referential jokes, and Wang can wall run now in addition to double-jumping and dashing.

The result is a frantic, circle-strafing, grapple-swinging, demon-squibbing adventure that plays like a Saturday morning cartoon version of Doom Eternal. You can upgrade your blade to cause enemies to drop ammo when you slice them to death, or your Chi Blast to generate health pick ups. The system is simple, and ensures you never stop moving, shooting, slicing and quipping. 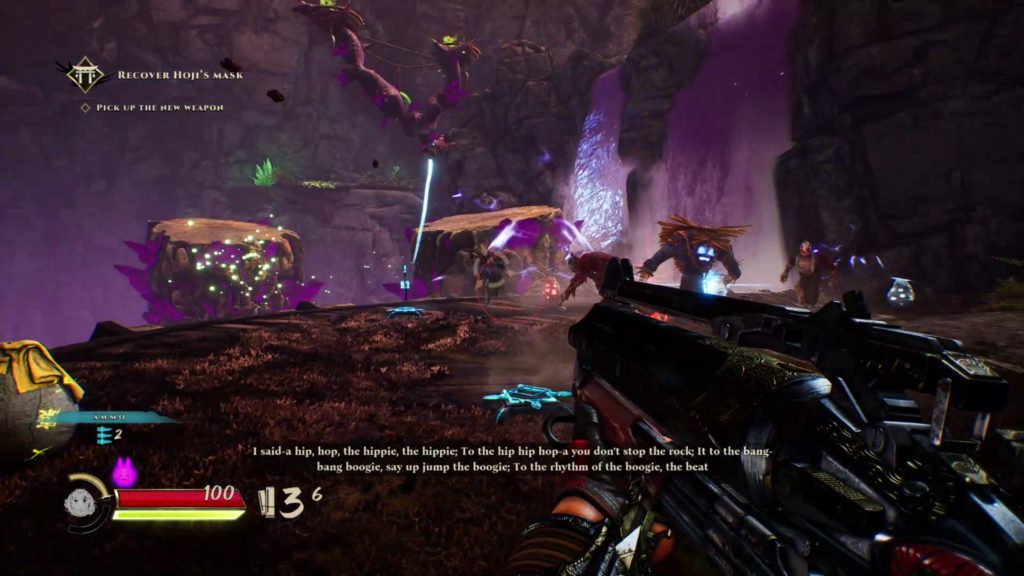 Lo Wang has a finishing meter, which allows you to hit both bumpers to instakill an enemy and utilise its weaponry. For example, you can tear the sword from one enemy’s hands and use it to one-shot everything you target. Alternatively, you can rip the drill from another enemy’s head and go to town with it. These aptly named “gore weapons” are great fun, and their removal is often gloriously disgusting to watch.

Action takes place in tight arenas where you can activate bloody traps or explode barrels to kill large numbers of enemies. The screen is often a mess of bright pick-ups, fire, explosions, and gore. It evokes Doom’s pace, particularly on any difficulty above easy. Standing still will get you killed very quickly.

Shadow Warrior 3 delivers a riot of noise and colour with all the subtlety of a firework jammed in your nostril, but it does it with considerable style and confidence. It’s Serious Sam with more self awareness, Doom with a little less posturing. Traversal is fun and fluid, though not always as precise as it should be, but I’ll admit to losing my temper with a few boss fights and reducing the difficulty. This is a game I’d play as anathema to something like Elden Ring. Shadow Warrior 3 is at its best when used as a cathartic power fantasy.

It looks pretty good in motion, too. Flying Wild Hog use bright, vibrant colours, flashy effects and beautiful backdrops to convey a sense of size and majesty. They also cut the action up with short traversal set-pieces like mudslides and grappling courses that maintain momentum even when you’re not blasting faces inside out. The result is an anarchic, old school shooter concerned first and foremost that you’re having fun. In a generation currently defined by the breadth of its open worlds, Shadow Warrior 3 presents a very deliberate, uncluttered change of pace.

Shadow Warrior 3 takes the franchise back to basics in terms of structure while adding new mechanics and weapons to keep it fresh.