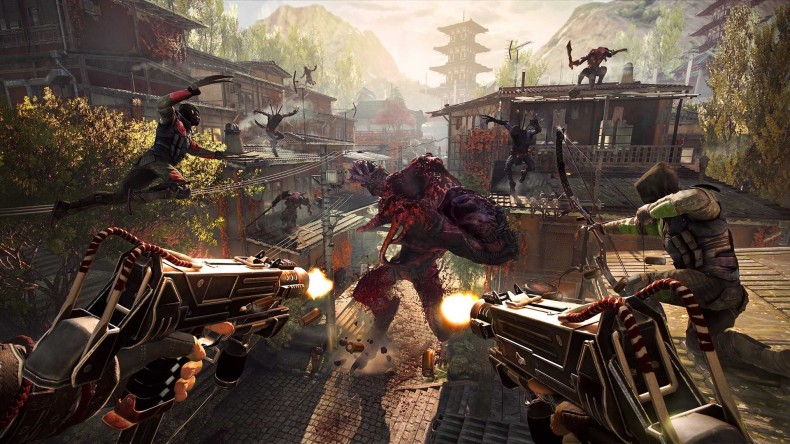 Shadow Warrior 2 takes the fast paced, gruesome combat of the recent Doom and enhances it with a loot system like that of Diablo or Borderlands. Add to that even more over-the-top acrobatics and a focus on up-close, melee encounters, and you have a gorgeous cacophony of particles effects, gore and raunchy humour that’s just joyous to play.

Everyone’s favourite foul mouthed first-person protagonist, Wang, – sorry Duke – is back to slice, dice and shoot demons, humans, robots, and giant insects whilst a ridiculous and amusing narrative plays out. This time around, five years on from the previous title, the world is full of nasty beasts and Wang has turned mercenary to cash in on the infestation. A job to rescue a half demon scientist, Kamiko (creator of designer drug Shade) soon becomes more complicated when her physical body is found to be too weak to hold her soul due to a demonic curse. Instead, Kamiko hops into Wang’s body and shares his consciousness, sending Wang on a quest to cure her. It’s a bizarre story in an equally bizarre world that compliments the theme of over-the-top combat with grotesque demons nicely. Many will find it to be a mere excuse to get maiming, and that’s just fine. Meanwhile, the copious amounts of toilet humour and staggeringly silly one-liners are more than enough to keep you engaged as the craziness unfolds around you. It’s the ideal tale to trigger some good laughs and let you loose on hordes of demons, because it’s the combat where Shadow Warrior 2 really shines.

It’s fast paced and beautiful, much like its brother in arms; Doom, and it’s all about quick, constant movement and twitch action. However, Shadow Warriors 2 turns it up a notch with a huge arsenal of weapons that cover the gamut of ranges, as well as magical abilities. You’ll be firing rifles from a distance as you sprint forward towards your target, switching to SMGs and pistols as the gap closes, before pulling out your katana and slicing your foe in twain inches from your face. All the while you’ll need to jump meters into the air (utterly defying gravity) and strafe right and left to dodge incoming attacks. And once you do get up close and intend to break your opponent down into component parts, an elegant and highly satisfying dash to get behind them before you render them into chunks of meat is the cherry on top that you never knew you needed to make your savage murder cake taste its sweetest. It’s glorious. After clearing an area of demons and thoroughly soaking the ground with blood, loot will be strewn across the battlefield begging to be picked up, categorised, compared, and eventually equipped. There’s tons of weapons, upgrades and ammo to collect, augmenting you and your weapons with elemental abilities, extra damage, increased fire rates and much more. Managing it all can get tedious; there’s a lot of it and the options are truly vast, but the crazy new weapons and the extra punch they pack after a particularly good pairing of upgrades is hugely satisfying to wield in the next blisteringly fast battle.

This loot system, as well as the weapon and character upgrades, scratches that same itch games like Diablo do. It’s a successful melding of mindless, gory murder with pleasantly calm inventory management. It aids greatly in the pacing of the experience. After an intense level of giant demon bunny rabbits trying to ruin your day whilst you dash around the environment like a magical ninja gunslinger, shifting items around in the inventory and taking stock of what you have and what you can create, provides that little bit of tranquility before it all starts up again, following that ideal curve of pacing and engagement. Of course, all this demon slaying does have the potential to become repetitive. Fortunately, partial procedural generation in non-story levels aids with this. The side missions Wang can do outside of the critical path feature random enemies, loot and level structure to keep things interesting, and although the pool of assets and level environments is limited, they’re all gorgeous and vary from each other significantly. One level may surround you with trees and nature’s splendour whilst another throws you into a cyberpunk, neon lit office complex. Meanwhile, an abundance of particle effects and superb lighting makes each level look stunning.

Moreover, you can always bring a few friends into the fray. Four player co-op allows you to grind for more loot and take on the demon hordes for sport, and it’s great fun. Although, only loot will carry over between players rather than game progress.

Shadow Warrior 2 is a great game. It takes the crude humour of Duke Nukem, the fast pace of Doom, and the copious amount of loot of Diablo, and creates a game that balances substance and style splendidly. It’s deeper than you’d ever imagine such a gorefest to be, but this never compromises the silly tone or the action-packed combat. It’s tremendous fun.

Ed’s note: Shadow Warrior 2 is coming to PS4 and Xbox One next year, so for fuck sake don’t forget about it if you’re not a PC gamer. You can cream over it then!

NPCs look at bit plastic and lack facial detail
Humour won’t be for everyone.

Shadow Warrior 2’s self-referential toilet humour, insanely stylistic combat, bounty of loot and jaw dropping visuals, add up to a thoroughly entertaining and silly game full of gory combat, dick jokes and impressive weaponry. It’s great fun if you’re not in the market from something serious.