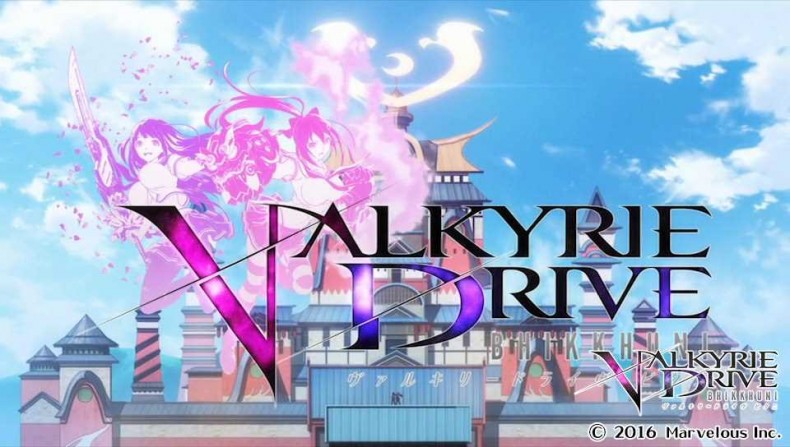 When I reviewed Gal Gun Double Peace I commended PQube for localizing games that I’d never expected would leave Japan. Valkyrie Drive: Bhikkhuni is from the creator of the Senran Kagura franchise, Kenichiro Takaki and it plays similar to the Versus games on PlayStation platforms.

Valkyrie Drive’s premise is interesting. Girls are infected with a virus and they turn into weapons when aroused. The girls get sent to islands to get cured and you start out on the island of Bhikkhuni with two sisters. Rinka and Ranka meet up with more girls on the island and basically end up fighting after a bit of dialogue. After a few hours I just ended up keeping Triangle pressed to fast forward dialogue to get to the combat sequences. Combat is similar to Estival Versus’ combat, but the enemy AI being quite brain dead is annoying. Things feel a little more weighty and slower here since there are combos that require holding and releasing inputs to execute. On easy mode you can get away with spamming the attack button, but chaining together a combo in any mode sometimes requires button inputs reminiscent of a fighting game more than a Musuo game. Each girl can unlock more Drives to use in combat. These Drives enhance the main character’s weapon with new attacks. Drives can have up to four levels that are unlocked as the story progresses. The Drives look great in motion and are similar to Shinobi transformations from the Senran Kagura Versus games. I haven’t been able to test the online mode yet as I’ve not been able to find anyone, and don’t know if there are region restrictions or just no one playing when I check online.

Even with a lot of re-use in terms of animations across Senran Kagura and Valkyrie Drive, the developers have done a good job with the visuals here. The only place I was let down visually was in the stage design. When you have to wander to the next area for another wave of enemies, you realise how empty and bland many of the stages are. The girls look great and animations are slick across the board. There’s even a dressing room where you can “interact” with the girls.

Usually I’d be praising the Japanese voice acting and music but things aren’t so pleasing this time. I encountered some audio issues after downloading the High Quality Audio DLC. Sometimes voices would stop playing while background music was on and I even had the game crash on me twice in my time with it. One of my biggest annoyances with games that don’t have English voices is that they sometimes end up dropping the ball on the text as well. I’ve noticed typos, spacing errors, grammatical errors, and missing punctuation throughout the story. For a subtitle only release with no English audio, this is disappointing.

With all the issues, I quite enjoyed most of my time with Valkyrie Drive. It is a rare game that has the best and worst plot ever. If you enjoy the Senran Kagura games or just need some anime titillation, Valkyrie Drive will satiate you until Senran Kagura Peach Beach Splash is localized.

But the plot isn't good enough
Localization has problems

If you’ve been craving more Senran Kagura after Estival Versus or just want a fun brawler with anime titillation, Valkyrie Drive is for you.