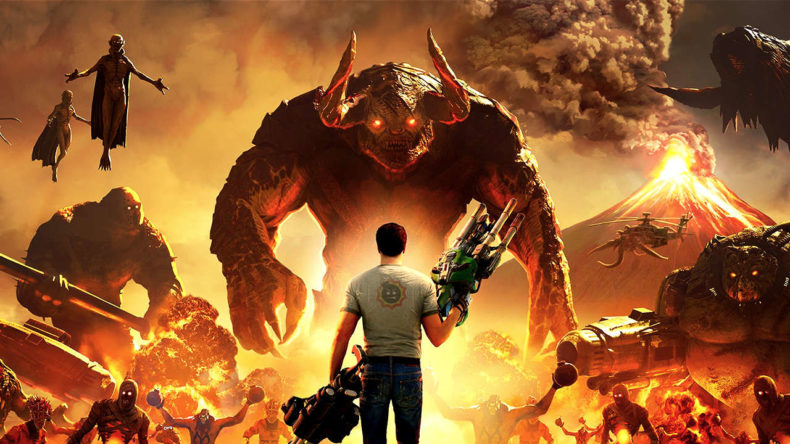 Catharsis is a good thing in gaming. It’s a big part of why many people – myself included – play games at all. While some find grace in the challenge, respite in the struggle, release in the knowledge of adversity overcome, I personally get my kicks from blowing the ever-living shit out of things. Empowerment is where it’s at, and few genres offer this thrill like the good old first-person shooter. Doom Eternal is great on a high difficulty, but have you tried it on easy? Smashing through demon skull after demon skull is a great feeling.

For years, though, one particular shooter franchise has flown the flag for mindless fun, and with its fourth iteration, Serious Sam continues to provide the same brain-off, trigger-finger-on feeling that made it a hit in the first place. Of course, the biggest issue with this is that the world has moved on considerably while Sam hasn’t, and boy, does it show. 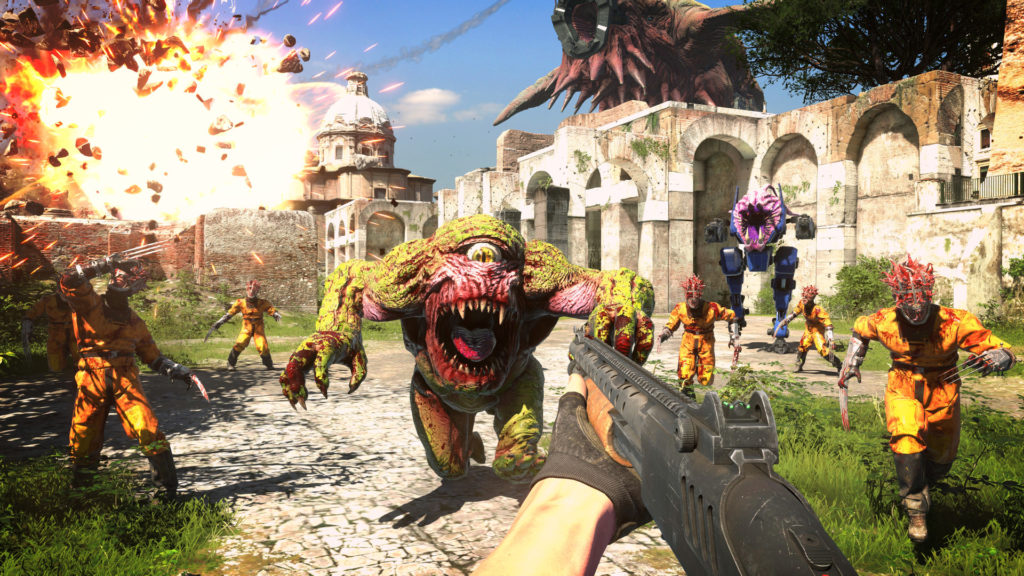 So, there’s a story, sort of. Several years into Mental’s invasion of Earth, mercenary soldier Sam Stone leads a team of elite headcases called Triple-A, which stands for Alien Artefact Acquisitions. Their job is to combat Mental by collecting and utilising otherworldly devices, such as, for example, the Ark of the Covenant, repurposed for this story as a kind of alien doomsday device. Long story short, this sees Sam and his team – including newly recruited man of the cloth Father Mikhail and an unlucky rookie who happens to get dragged along for the ride – on the trail of the Lost Ark and the Holy Grail.

To call it tongue in cheek would be on par with calling Sam “inappropriate”. It’s total nonsense, so much so that occasional attempts to add genuine emotional pathos fall immediately flat and feel completely out-of-place. The fact there’s a story at all is a bit weird as the upshot of every objective is the same: mow down legions of demons and make crappy one-liners (which the team workshop throughout, of course). Even boss battles feel low maintenance, requiring little more nuance than shooting the glowing spot until everything explodes.

It’s not helped by creaky cutscenes with horrible animation that looks for all the world like it was lifted from a PS2 game. Characters don’t move how we’ve become accustomed to characters moving in games; heads bob unnaturally, arms gesticulate apropos of nothing, and the lip-synching is non-existent. But then, in all fairness, if you skip every one of them you’ll still be able to follow the story as much as you really need to. 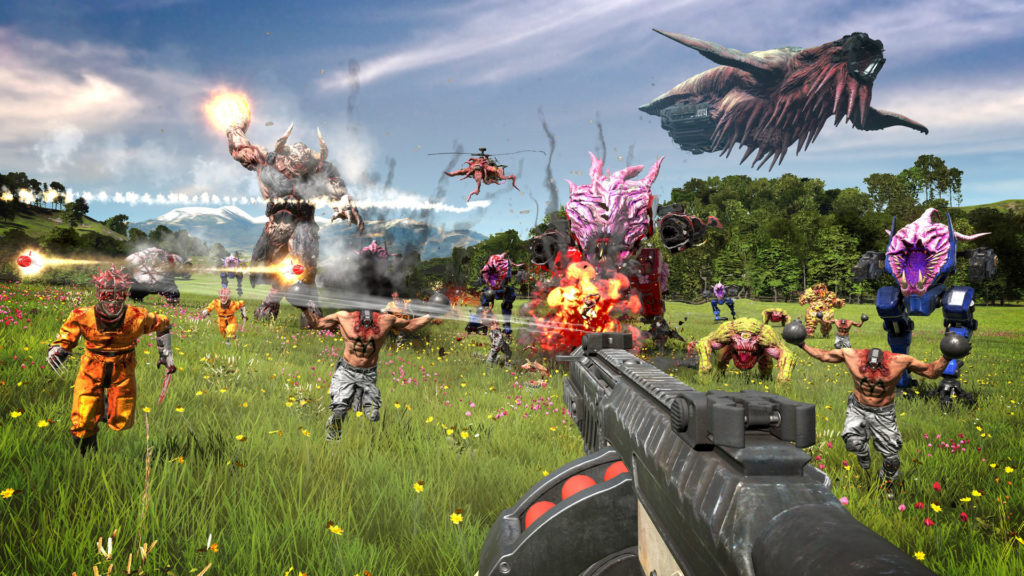 While this all sounds negative, I should point out that I’ve had a ball with Serious Sam 4. While I can’t say for sure that it wasn’t aiming for something loftier, I can certainly say that if it was then it fell short, landing firmly in much more familiar and welcoming territory. Shooting stuff in Serious Sam 4 is awesome. Sometimes there are so many enemies on screen, shooting at you, charging at you, exploding on you, or whizzing around above you that it almost feels like a bullet hell, only one where the main character constantly yells quips from a 90s action movie.

Weirdly, the button mapping sticks Sam’s codex on the Y button (on controller), and forces you to swap weapons using a wheel. It’s not a major issue, but I can’t remember the last time I played a shooter on a controller where you didn’t swap weapons with Y or Triangle. And changing it is such a faff that in the end I just decided to learn to live with it. At certain points you’ll find alien artefacts that grant you skill points for Sam’s rudimentary skill tree. The skills you can unlock have zero actual context (one lets you punch enemies to heal, for some reason), but these days it’s not a game if there are no skill trees.

There’s nothing spectacular about Serious Sam 4. The OTT set-pieces are silly, the scripted moments are sabotaged by the iffy graphics, and the level design is let down by its almost pathological blandness. I say “almost” because there are a few stages that stand out visually, even if the actual structure is a little lacking. A particular favourite is escaping an army of demons during a volcanic eruption, for example. And yet, Serious Sam 4 manages to be incredibly fun to play at the same time. Weapons that fire enormous cannonballs, a shotgun you simply never have to reload, a decoy device that has a hologram of Sam yell insults at the enemy – these things don’t necessarily make up up for the game’s shortcomings, but they make them matter less. It’s a throwback for sure, and one that has to almost be admired for rocking up in a flattop and romper boots in a year that’s had some of the incredible releases 2020 has.

Serious Sam 4 does absolutely nothing new or original, and it’s not apologetic about that. It very much knows what it is: an over-the-top strafe-shooter with nothing to prove to anyone. It’s not the cleverest in the room, but it may be one of the loudest, and sometimes that’s all you need to scratch that itch.

Serious Sam 4 does what Serious Sam has always done: deliver short-lived cathartic thrills that manage to be fun despite its creaky engine and dated mechanics – but you have to wonder how long they can keep flogging the same horse.