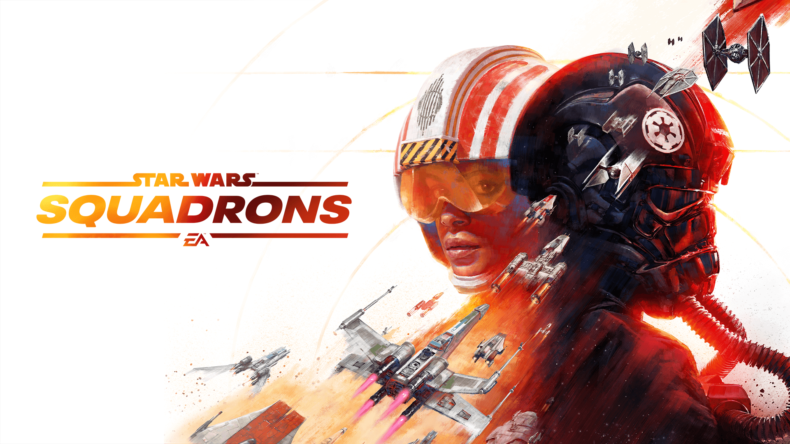 Star Wars has had a bit of a bumpy ride in recent years. The last few movies have been a little divisive for various reasons, but I still regard the original trilogy as one of the greatest in cinematic history. Little Boy Me watched Episodes IV, V and VI over and over again, and while Lightsabers and Jedi powers were usually the draw, the moments that gave me the greatest thrills were the fleet battles. Yavin-IV, the Battle for Endor; those were some of the best air-punch moments in the trilogy. It has been a long time since we explored this aspect of Star Wars in a video game, but Star Wars: Squadrons takes the concept of being a fighter pilot in this universe and flies with it.

Casting you as a rookie pilot both in the Rebel Alliance and the Imperial Fleet, the dual storyline picks up immediately after the destruction of Alderaan before skipping to a period just after Episode VI, and shows a side of the lore rarely examined. It’s not uncommon for Star Wars media to muddy the moral waters and show the shades of grey in both sides of the conflict, but Squadrons does it to a greater extent than most other Star Wars games. I wouldn’t say it goes deeply into the spiritual implications of choosing a side, but there are moments where you realise you’ve been shooting at helpless refugees just because you were told to that might make you at least think about the finer details.

That said, Squadrons is not a story heavy game. The campaign has a plot, yes, but most of the story is told in cutscenes that don’t necessarily feature your character. In fact, your pilot is a mostly voiceless cypher who the NPCs can riff off, which is kind of fine, because every single moment I spent outside of my cockpit I was counting the heartbeats until I could get back in. Although, that’s partly because the stuff outside the ship isn’t all that exciting.

In between missions you can customise your ship and pilot (the latter is briefly shown in a few cutscenes, while the former is shown sparsely between missions or in the hangar), or talk to your squadron. While it’s nice to get to know the people flying alongside you it’s largely pointless. Any attempts to make you care much about them fall a little flat, as they spout expositional descriptors or prattle on about backstory that doesn’t really amount to much. It’s a nice idea, but I struggled to get invested or attached.

Which is OK, if I’m honest, because it’s not what I signed up for. What I signed up for was spectacular space battles in the Star Wars universe, and that’s what Squadrons delivers in spades. Once you’re strapped into the cockpit nothing before or after will matter very much at all. Played with headphones (and in VR especially, which we’ll come to) this is one of the most immersive aerial combat games I’ve played. Initially I was put off that there’s no out-of-cockpit view, but that’s a good thing, because putting you right there in front of your instruments means you always feel in the thick of it.

For me, controlling the ship feels more intuitive on a gamepad than mouse and keyboard, but if you’ve got a flight stick, Squadrons is compatible with HOTAS (Hands-On Throttle and Stick) models and it changes the experience completely. Speed is controlled by the throttle, while you pitch and yaw your way through fields of enemy fire, asteroids, debris, explosions and fighters. Most missions are objective based, usually involving an escort phase and a dogfight or fleet battle. 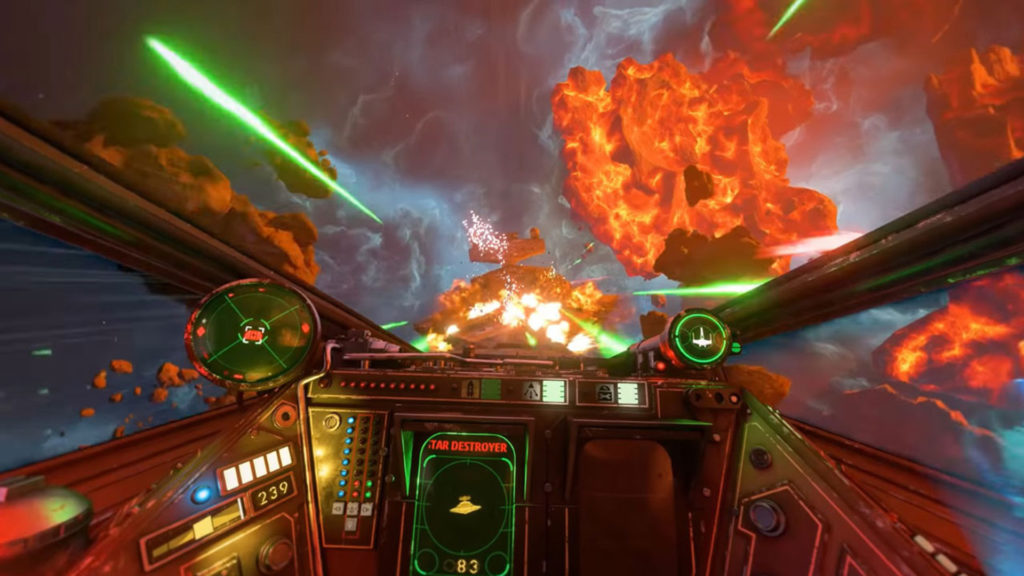 Each ship can divert power to lasers, engines or shields, which will improve firepower and recharge, speed and manoeuvrability, or defence respectively. Each fight becomes a balancing act as you decide which is more important for a given moment, and frantic too, as you barrel roll to avoid volleys of fire, swoop at the last moment to narrowly escape a fatal collision, or whoop as you blast through the flaming innards of an enemy ship you just blew to pieces. Interestingly you can also choose which side of your ship to angle your shields at, which can get you out of trouble when you have a persistent tail.

While the story dictates your choice of ship throughout, in the multiplayer and AI Fleet Battles, you get to pick from four ship classes: Fighter, Bomber, Interceptor and Support. Each has different strengths and weakness, with the Support ship, for example, giving you the ability to repair and resupply your allies, or use devices that scramble the enemy radar or highlight targets for your squadron to attack. Multiple loadouts create a deeper experience than I was expecting, with abilities and secondary weapons on cooldowns that fundamentally change how you approach situations.

It’s in the multiplayer modes that Squadrons really finds its wings. Played with friends or strangers, both Dogfight and Fleet Battles are exceptionally good. Going head to head with a free-thinking human is always more exciting than facing off against an AI bot, but the sense of accomplishment when you down a Capital ship in Fleet Battle mode is off the chain. 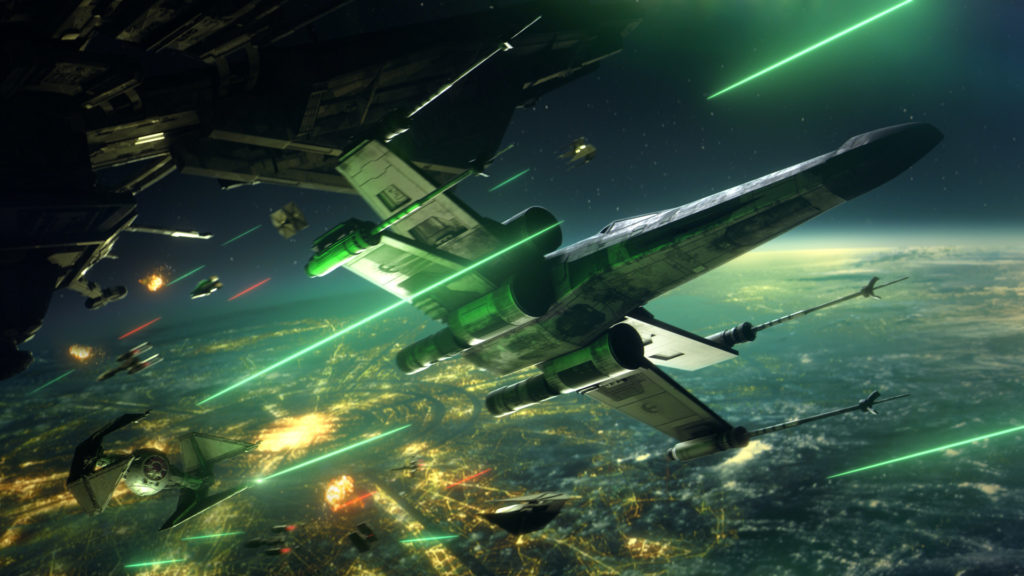 While I can’t argue that it would better played with a communicating group of friends, I was playing with randoms during my time with the multiplayer modes and we did fine, thanks to an emote wheel and a ping system that make communicating between ships a doddle. What I couldn’t get to grips with in my short time were the full roles of each class, and how to min-max a loadout to make it more efficient. I can’t stress enough just how intoxicating the flight and combat are in this game, and how much playing in multiplayer elevates them even beyond that. You can even play online in VR, too, which may give you a slight advantage if you’re solid player in the first place.

Squadrons features skill-based matchmaking, which always ruffles a few feathers, but the cross-platform lobbies will ensure you won’t need to wait a month of Sundays to find a match. And while you can earn both currencies (Glory and Requisitions) in campaign mode, the easiest path to new cosmetics is through multiplayer. Also I should point out that there are no microtransactions or cash stores in Squadrons – every cosmetic item is earned by playing the game.

The Fleet Battles, whether in multiplayer or solo, are perhaps the icing on the cake here. These massive conflicts pit you against a wall of enemy ships, with dozens of fighters on either side, as well as attack ships, resupply stations, and, of course, the Capital ships. Speeding across the deck of a Star Destroyer, hammering its laser cannons or taking apart its critical targets like the shield generators and power supply, is an exhilarating feeling. 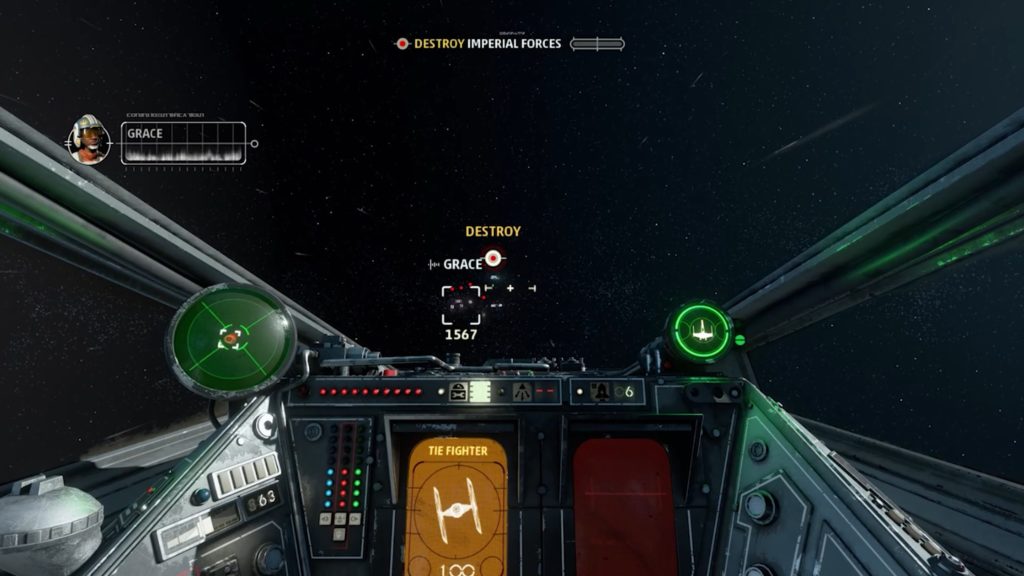 It can be a little frustrating to constantly hear that you have a missile locked onto you, or to get shot down by an enemy you didn’t even know was targeting you, but it’s also insanely satisfying to navigate a field of fire to “stay on target” and deliver the finishing blow to a gargantuan battle ship. Dogfights are exciting affairs, too, but also immensely irritating when up against someone who really knows how to play.

Star Wars: Squadrons can be utterly stunning at times, too. Environments and ships are highly detailed, and the lighting is gorgeous, shifting and changing as you navigate below larger ships or fly by above. Huge space structures can be avoided or flown around to shake a bogey, and lasers and explosions light up the battlefield like the 4th of July. With all this going on though, the frame rate can occasionally stutter – though it’s often not too noticeable in the campaign. The sound direction, too, is exceptional, featuring all the licensed music you’d expect to hear, as well as the familiar pew-pew-pew of laser fire or the comforting whistle of an astromech droid.

The downside to such beauty is the sheer length of some of the loading screens. At times I was waiting for a full five minutes to load into the menu screen, with more long load times to come. I’m playing on a PC with the settings up high, admittedly, but some simply won’t tolerate such long waits and Motive Studios need to patch this issue as soon as possible. There’s also a slight issue on PC where even activating V-sync doesn’t take care of the screen-tearing, although I was playing on pre-release code and this is likely to be fixed. It’s a pretty graphically intensive game, yet on my RTX 2060 everything runs pretty smoothly except this. Again, it may be something they can patch their side. 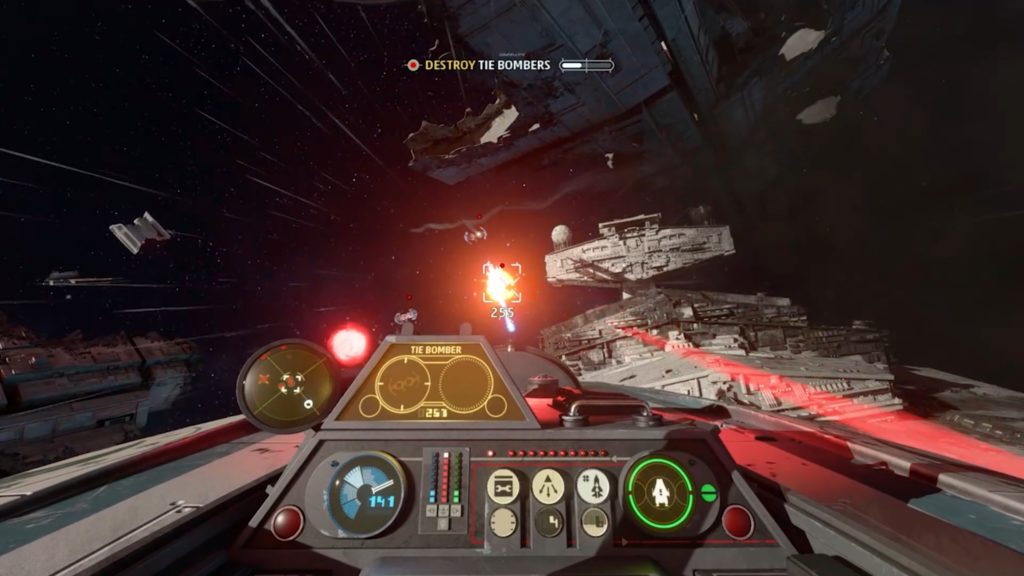 If you really want to experience Star Wars: Squadrons at its most immersive, and you have the capability, the VR mode is simply spectacular. It can be a little dizzying at times, and if you suffer from inertia while using VR, beware, but the detail is so high and the action so frantic and satisfying that playing Squadrons in VR is as close as you’re going to get to being in the cockpit of a real X-Wing. Some of the ships are built with bubble cockpits, giving you a slight advantage in terms of where you can look; with no rear-view or third person, a fighter behind you will have the upper hand unless you quickly master the art of drifting your ship and getting that vantage point. I tested the VR mode with a standard Oculus Rift headset using a Thrustmaster T16000 flightstick and it was incredible – at least until the inertia kicked in.

Sadly, there are no planet-side levels, and currently no plans for DLC later. What this means in simple terms is that there’s no Hoth, so you won’t be tripping AT-ATs into the piste with your snowspeeder’s tow cable. There are also only four ship types for each faction (totalling 8), which, given the breadth of the Star Wars universe, seems a little poultry. This is not a major issue as the line-up we have is fairly diverse, but it would have been nice to pilot, say, Slave One or, of course, the Falcon herself.

Despite a handful of limitations, Star Wars: Squadrons is a superb aerial combat game. If you can get past the loading screens and occasional frame stutters, there’s a fantastic experience in or out of VR, with a decent if slightly superfluous story mode. The meat and potatoes is the multiplayer, and the Fleet Battles are the gravy. It’s an authentic, exhilarating Star Wars experience that fans of the franchise or the genre will absolutely love.

Star Wars: Squadrons is an excellent aerial combat game and a pleasing return to the franchise roots. No gimmicks, no cons, no messing around: anyone who ever dreamed of being a fighter pilot in the Star Wars universe needs to check this out, asap.