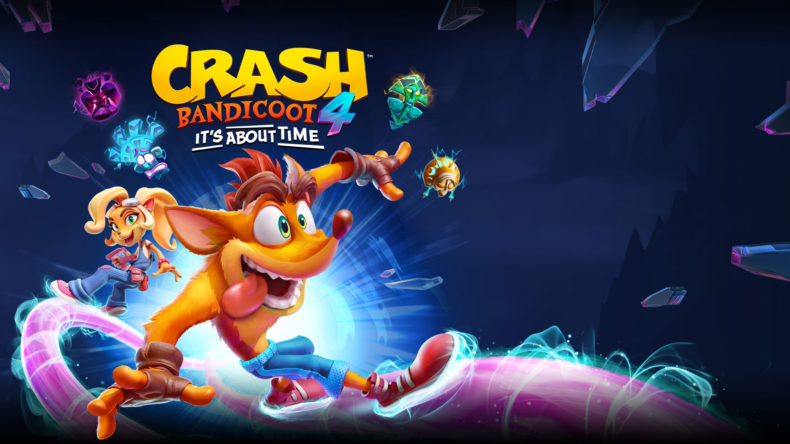 What a difference one little circle can make. Anyone who played the Crash Bandicoot N. Sane Trilogy will likely attest that it was harder than they remember. Maybe if you played it back then and struggled now it’s because your reflexes have dulled, or maybe you’ve gotten used to many different genres and the precision platforming required by Crash just isn’t your bag anymore. Either way, people swore. A lot. And I swore a lot playing Crash Bandicoot 4: It’s About Time, too, but maybe a bit less thanks to that aforementioned little circle.

The circle in question is a gold-ringed indicator that appears beneath you when you jump and tells you where you’re going to land. You might not think this is a big deal – it’s hardly revolutionary – but it makes a huge difference in Crash 4. As in many previous iterations of Crash you’ll be moving fast and thinking faster, leaping onto active hazards, disappearing platforms, man-eating lilypads, or good old fashioned TNT crates. Often there’s a sense of momentum that drives you on and makes being cautious difficult, so that little circle is a literal life saver.

But it’s not the only big change in It’s About Time: in fact, Toys For Bob has been working hard to add new elements and mechanics to a franchise that hasn’t seen a numbered sequel for 22 years. For instance there are four masks to be found that bestow the wearer with some very special powers – and you’ll need them, too. While Crash and his little sister Coco can double jump, slide, and spin through obstacles, that’s not enough to contend with some of the outlandish enemies you’ll face. 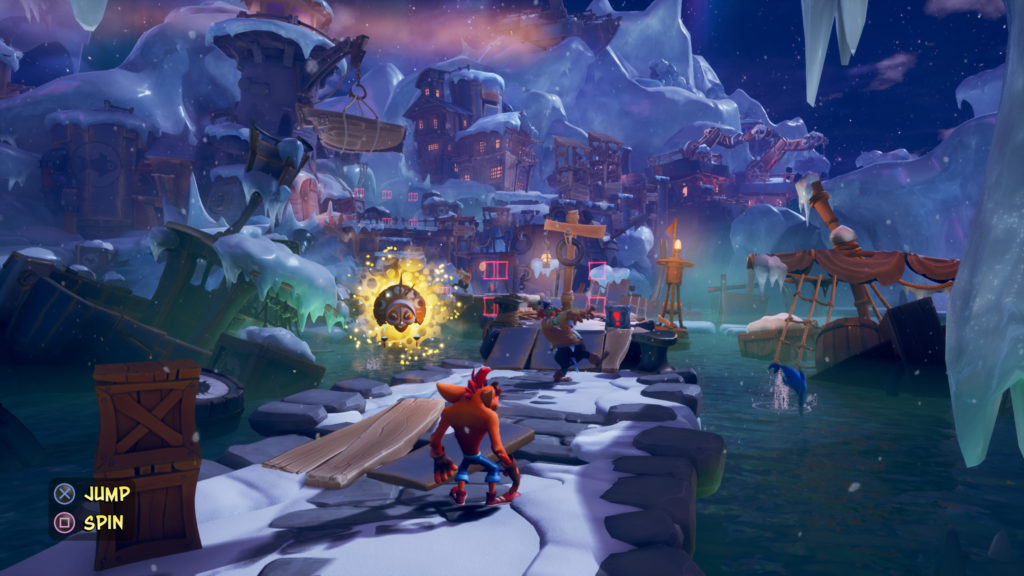 Set directly after the conclusion of Crash Bandicoot 3: Warped, the latest entry sees long-time villains Dr. Neo Cortex, Aku-Aku and Professor N. Tropy finally escaping their dimensional prison and immediately launching an assault on everything because, well, because otherwise there’d be no story. Standing in their way are Crash and Coco, and a handful of guest characters willing to hop in and out of various timelines to give you a hand.

I don’t want to spoil too much, but arguably the side characters are more enjoyable to play as than the main pair. This games version of Tawna, for example, is a bad ass pirate warrior, able to cling to walls like the Prince of Persia and beat more butt than Lara Croft. While the main story focuses on Crash and Coco, the other characters interact with their timelimes in interesting ways, even though sometimes these side missions do repeat elements of the other levels.

About half way through it all changes, and you’ll be running back through remixed versions of each stage, and frankly it just gets harder and harder. The thing is, though, you don’t really ever unlock or develop anything that helps you. The masks have interesting skills attached, such as the ability to phase objects in and out of reality, create or tornado of dark energy, or flip gravity on its head. But you can only really use them at scripted intervals, and there’s little opportunity to be creative with them or experiment. 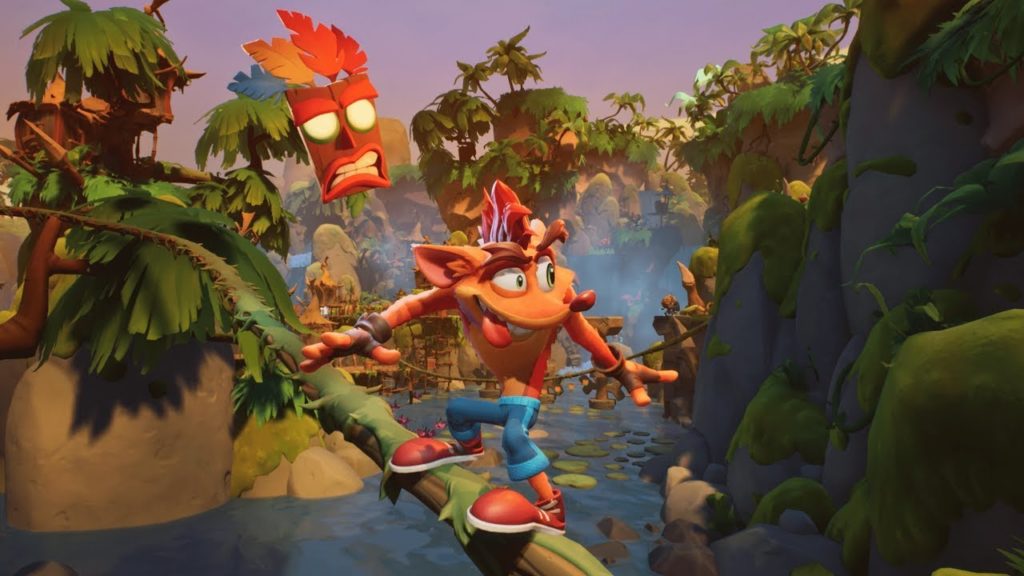 Each stage has six challenges that reward diamonds, and with enough you can unlock a huge variety of skins. To earn them you’ll need to complete a variety of goals, and they’ll likely take many, many attempts to achieve. The checkpoint system is pretty lenient (you can choose to play with a finite number of lives if you want to), but death can come at any moment. Traps and hazards aren’t always signposted, leading to an element of trial and error, and death doesn’t save your collected items, so you may be repeating some areas and sequences a lot.

Boss fights in Crash Bandicoot 4 are pretty well made, despite also being fairly difficult. An early one pits you against a massive drum-playing robot, while others feature multi-part chase sequences, where you’re running from giant blue demons, dinosaurs, and monster trucks. They’re exhilarating, and among Crash 4’s best moments.

It’s tricky to know who to recommend Crash 4 to, given that it’s clearly designed for a younger audience yet incredibly difficult throughout. In real terms it’s going to appeal to everyone, but the difficulty could be a barrier for some. Although despite that it remains fun, even when you’re dying over and over again because you can’t get the timing right on a jump or correctly line up a little golden circle with a solid surface.

You could always extend the fun by indulging in the multiplayer, which is an old school pass ‘n’ play system and sees you and up to three others taking it in turns to race against the clock or smash as many crates as possible checkpoint to checkpoint. I played it for some time with my kids and, admittedly, they gave me a run for my money.

Crash Bandicoot 4: It’s About Time is a great platformer, with enough fun new mechanics and side concerns to keep you interested. It helps that it’s gorgeous in motion, the animations fluid, and the bright, colourful environments full of life and detail. Crash and Coco are adorable, and while the enemy design isn’t as far out as some things we’ve seen, it’s still just zany enough to hook the youngsters. It’s just a shame that the coolest elements in it (the mask powers) are limited to scripted moments. That said, this is still a fantastic return for one of platforming’s most lovable mascots.

Full of colour, humour, and challenge, Crash Bandicoot 4: It's About Time is a storming return and a great follow up to the original trilogy.