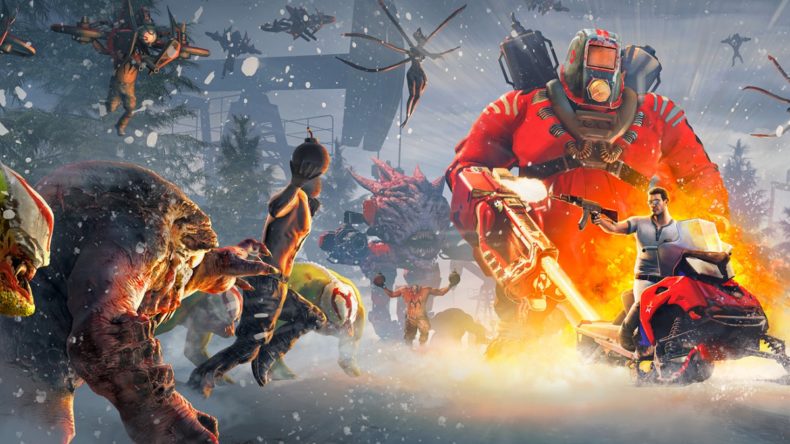 The sheer carnage in Serious Sam: Siberian Mayhem is unmatched. Hundreds of enemies flood the map and want you dead. Blood and guts splatter all over the screen as you tear them down with various weapons. The inability to take a breath as constant waves of mutants, demons, and God knows what hound your every move. Carrying on the high octane action of Serious Sam 4, Siberian Mayhem is bonkers. Not only this, but it’s challenging beyond belief. Within ten minutes of starting out, I was dead. Using a pistol to take out a swarm of Gnaars felt unfair. 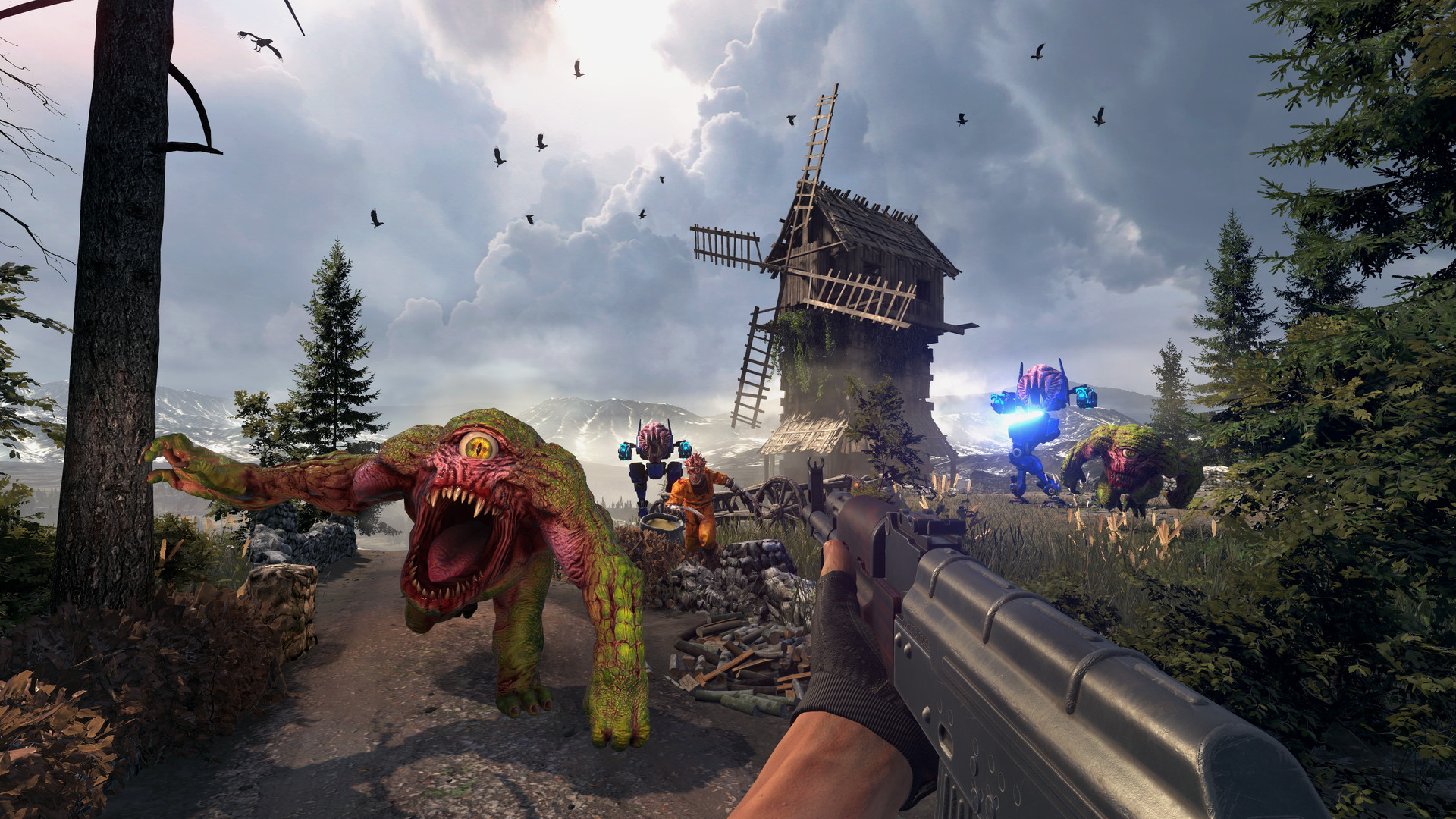 However, once the flow of combat starts to take hold, and your arsenal steadily grows, Serious Sam: Siberian Mayhem is so damn good. Towards the end of the five to six hour campaign, you’re choosing from tons of weapons and gadgets to wipe out Brand’s army with style. Set during the events of Serious Sam 4, Sam Stone finds himself in deepest and coldest Siberia with the goal of heading to Tunguska and stopping General Brand once and for all. Not a second went by where adrenaline wasn’t flowing. Croteam’s pairing with Timelock Studio (made up of popular modders within the community) provides one of the most enjoyable and insane adventures yet.

Siberian Mayhem is a standalone expansion. One thing it does is combine the thrills of Serious Sam 4 with new weapons, enemies, and locations. Siberia is a great setting. Abandoned train stations and industrial facilities, forests and sprawling fields. The level design blends claustrophobic encounters and large scale battles. It does feel a bit empty at times. You’re encouraged to explore, but more often than not, some of the areas feel empty. No matter where you are, the enemies keep on coming. There’re some new monsters added to the fray, such as the Draconian Burner. These weird mask-wearing freaks launch rivers of fire from their guns whilst flying through the air. Another messed up creation is the Octanian Sentry Tower. These huge structures fire drones at you and launch flurries of missiles to stop you from destroying them. 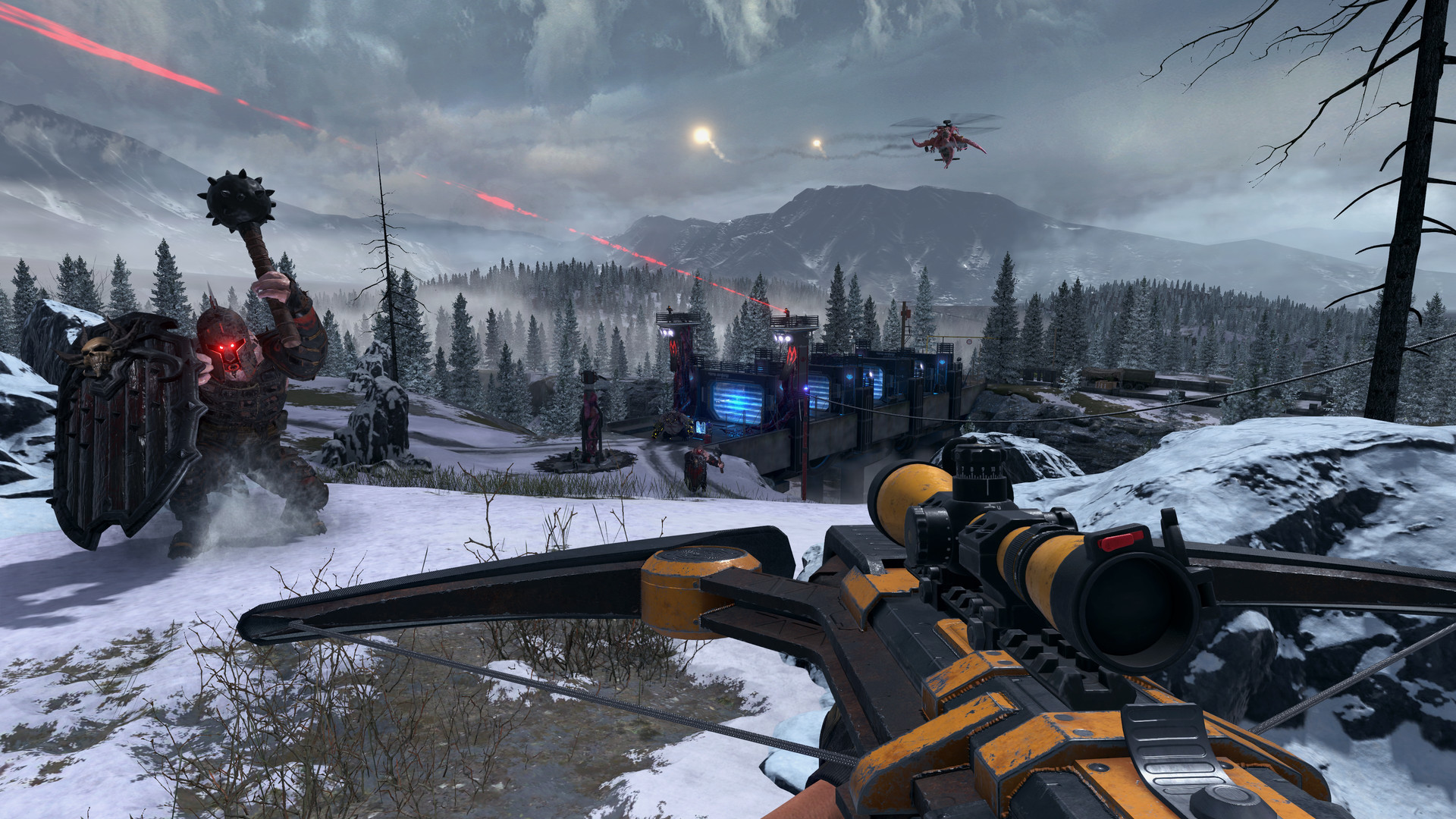 It’s the design of these aliens that make Siberian Mayhem so enjoyable. Aurigan Haemovores look like twisted versions of Nosferatu; Major Bio-mechanoids are huge mechanical creatures that have heads reminiscent of Kang from Teenage Mutant Ninja Turtles; Kleer Skeletons are fast, boned beings that charge at you with ferocity; Technopolyp Helicopters combine helicopters with organic matter to terrify from the air. There is such a variety of enemies with a range of attack patterns. You’re constantly being kept on your toes and it makes each fight thoroughly enjoyable.

Another fun aspect of Serious Sam: Siberian Mayhem is the weapons and gadgets you get to use. Some are unlocked as part of the story. Others are hidden behind puzzles off the beaten track or by completing side quests. It pays to explore the frozen landscape as some are incredible. Take the T.A.C.T. for  example. It lets you call in an air strike that clears a heavily populated battlefield in minutes. I can’t work out if I prefer the Black Hole or Hoverboard Scooter more. The gadgets are really impressive, and I never got bored of using them. As for the guns, some are much better than others. The new XPMR “Burner” Raygun is hands down the best weapon on offer. It fires out a stream of controlled fire, ripping through hordes of enemies in a heartbeat. 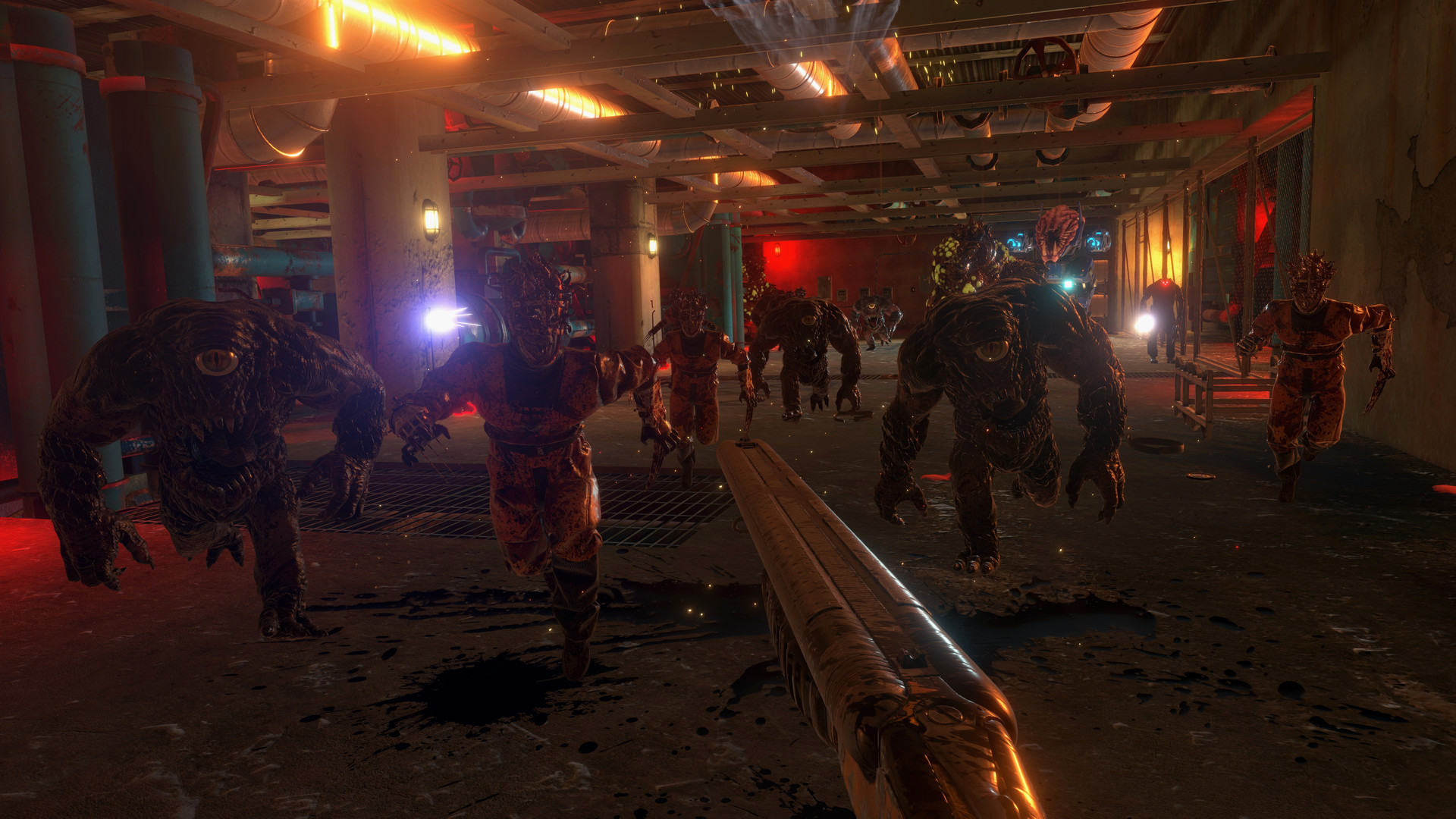 The TCC-2 “Perun” Crossbow is a nice new addition, but I found it was pretty useless when tons of enemies are running right towards you. I became a big fan of the shotgun and found myself using it more than any other weapon. it helped when I unlocked the grenade launcher mod for it early on, as it became an integral part of my arsenal. Siberian Mayhem works when you have the firepower. Grenades, Rocket Launchers – even the SBC Cannon taking straight from a pirate ship are the most effective. Saying that, I couldn’t get enough of the XM214-A Minigun because it tears through enemies with ease.

Serious Sam: Siberian Mayhem: A Sam to the slaughter

I never struggled for ammo. You find bullets, health, and shield everywhere. Courtesy of the Serious Artefacts of Might (or S.A.M. for short), you can unlock an ability where enemies drop it as well. There’re ability points everywhere, and once you find them, different abilities can be unlocked. These range from being able to melee attack larger aliens to riding them as well. There aren’t loads of upgrades for Sam, however, the ones you do get are just enough to make a difference. With all the weapons, gadgets, and abilities, Croteam and Timelock Studio want you to have a blast. 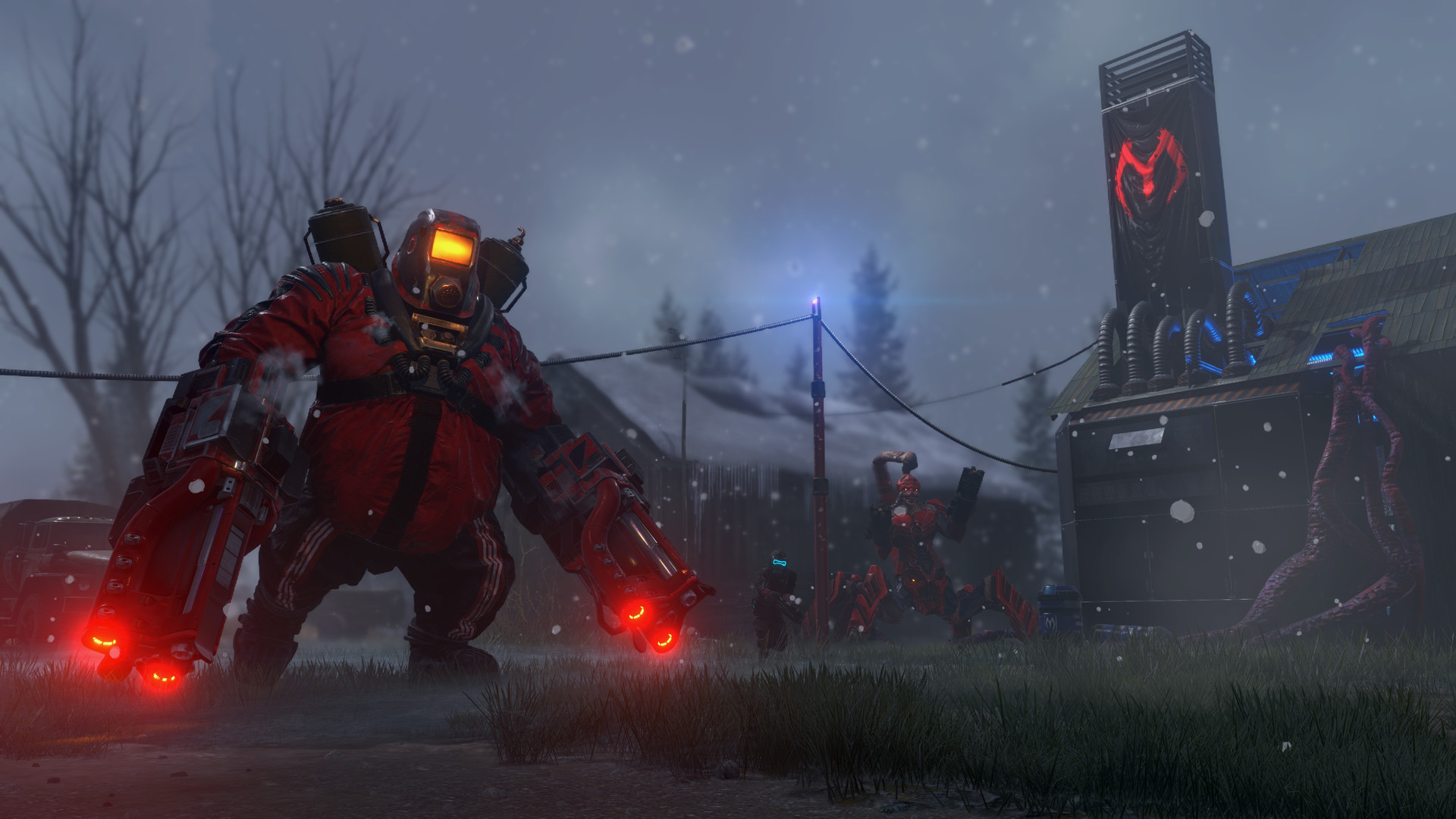 Whether you’ll enjoy Siberian Mayhem all boils down to what you want from an FPS. It might feel archaic to some. The repetition of slaughtering thousands of enemies might get boring if you want something more from the genre. Personally, I thoroughly enjoyed the non-stop, heart-pounding action. It feels like Doom on steroids. Sometimes, you don’t want to think too much. That’s why I think a lot will bond with the chaos it offers. It might not be complex enough for some, but if you just want to blow the shit out of hordes of monsters, it’s an ideal palette cleanser.

Serious Sam: Siberian Mayhem is ridiculous in all the right ways. The varied weapons and gadgets give you many reasons to experiment with your arsenal. The enemies are varied and constant. There’re even the occasional puzzle to tax your brain. Some of the areas feel a bit barren. It’s a b-movie video game, but I’m OK with that. if you just want something that requires little thinking and plenty of trigger-pulling, jump right in. It may not scratch the itch for everyone, but there’s enough to please those fans who want more time with the Duke Nukem-inspired Sam Stone.

Some areas feel bland
Repetitive combat
Difficulty can be insane

Serious Sam: Sliberian Mayhem offers the similar carnage and heart-pounding action of its predecessors, with some cool new weapons to boot.