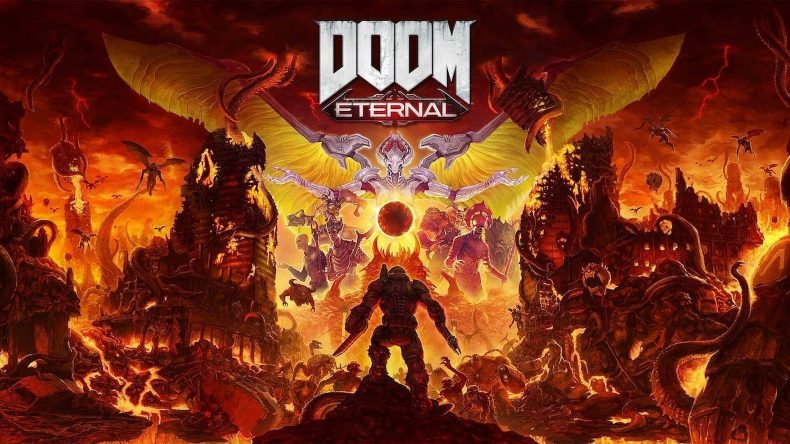 There were occasional moments while playing Doom Eternal when, upon staggering messily to the end of a particularly gruelling encounter like the last man standing on an epic pub crawl through an active warzone, I had to put down the controller, rub my eyes, walk away from the screen and place my face into the cold, tight corner of the room and have a “moment”.

As a standalone experience, Doom Eternal is roughly equivalent to having your brain removed and replaced with a jukebox that plays nothing but Disturbed, and a view like a butcher’s window; as an evolution of the franchise first brought to life by id Software way back in 1993, it’s almost perfect. Like the orca whale, the Golden Eagle, or the African lion, Doom has, over the decades, evolved to be the apex predator in its territory.

At this point, id Software has such a confident and competent team at work on this franchise that the game fairly struts, a steel-feathered peacock with guns and gore and explosions where the pretty green patterns should be. From the moment you step into the romping, stomping boots of the Slayer, your senses are assaulted with noise and violence, and if you’re not playing this in a dark room with headphones strapped around your feeble mortal ears you’re doing it wrong. See, nothing about Doom Eternal has a soft edge. Early on you’ll liberate an orbital fortress from the forces of Hell that affords a breathtaking vista of an invaded Earth, her once green and verdant face scarred by burning pentagrams thousands of miles across. And from this fortress you’ll launch a one-man offensive on anything with horns, scales, or massive canons surgically attached to its forearms. It’s a sanctuary, as if you need one, and offers a perspective of the Slayer that you won’t get anywhere else, by way of his collection of figurines, magazines, metal as hell guitars, and guns. If he has a sentimental side at all it’s for the trophies he hoards in what passes for his living quarters.

The Fortress of Doom itself acts as a hub, where you’ll return between your uber-violent excursions, and acts as a treasure trove of alternate skins, upgrades module and Easter eggs that you can explore at your leisure. Or if you get bored not ripping the bottom jaw off of something every three and a half seconds you can head down to the “Ripatorium” and go ham on conjured fiends in what amounts to a practice room. And, honestly, a practice room isn’t a bad idea in Doom Eternal.

Systems sprout from systems like hydra heads in the opening hours as you’re introduced to all the different collectibles you’ll need to find in order to upgrade each weapon, upgrade the upgrades for each weapon, improve your Praetor combat suit, boost your Slayer’s attributes, and add permanent buffs to your performance. Initially it’s a lot to take in, but give it a little while and it begins to make more and more sense on a scale roughly parallel to how desensitised you’re slowly becoming to picking tiny chunks of demon out of your armour joints. Every tiny incremental upgrade is essential, though, as Doom Eternal is nothing if not Hardcore AF, and it will remind you of that fact at every opportunity. Even played on the default Hurt Me Plenty setting (referred to in other, lesser games as “Normal”), there were times when I just wanted to sit alone and cry for a while before carrying on. Whatever horror aspirations this franchise may have had at one time or another (Doom 3, in particular, I’m looking at you) are long-since drowned in their own blood and tossed on the fires of raging fury.

You know how most games start you off with a pistol, then maybe a submachine gun, and save the shotgun until a bit later when you’re ready to take the stabilisers off your murder-bike? Well Doom Eternal, in time-honoured fashion, starts you off with a shotgun that doubles as a grenade launcher and then just continues to hand you bigger and messier guns as time goes on. Want some low-level enemies to smash through until you get your bearings? Here’s two zombies and– ah, bollocks, throw in the spider-demons. What are we on? Level 1? Prologue done? Wheel out the Mancubus, well Mancubi, I suppose because you’ll rarely have just one of anything to contend with.

Doom Eternal’s combat is a satisfying, frustrating, but above all thrilling dance of risk and reward. There’s no cover mechanic, no ADS and no reload button – you simply burn through ammo until you’re dry then swap to the next gun on the wheel without so much as a cigarette in-between, and aside scattered pick-ups that diminish as the difficulty rises, the only way to get ammo from your enemies is to chainsaw them in half. While canisters of fuel lie here and there to make life that little bit easier for the discerning demon-slayer, the best way to refuel your chainsaw is to mush faces. A shoulder-mounted flamethrower will ignite demons and force them to shed armour pick-ups, while if you’re after a boost to your flagging health, the returning Glory Kill is your go-to-guy. Hitting R3 when a demon is staggered will perform a gratuitous finishing move that rains health among the brains and eyeballs. Perform one on a Cacodemon and tell me the wet pop as you rip out its eye isn’t the most satisfying noise you’ve heard in a game for years.

With these systems in place the combat loop in Doom Eternal becomes like crimson crack, and it’s only when you realise that in order to survive an encounter you must always be killing that the nuances of the combat become visible through the curtain of red mist. Whereas in Doom 2016 you could arguably get through the entire game with the shotgun, in Eternal you must constantly switch between death-dealers to maximise their effectiveness. Shielded enemies, for example, are only weak to the plasma cannon, while the energy shield upgrade on the Chaingun can be a life-saver in a clutch. Each encounter is treated as a standalone instance, which rewards you with a weapon point to improve the mods on your guns with things like reduced cooldowns or a greater blast radius, and hidden time trials and Slayer rooms afford even more goodies if you can stomach the challenge. Each mission is crammed with hidden pathways and collectibles, from cheat codes that make return runs of finished missions that much easier, to figurines, skins, and power-orbs that grant super speed, double defence or infinite Glory Kills for a set time limit. With the new wall-climb ability and a double-jump, double-boost chain, getting around the environment and navigating the many platforming puzzles is as satisfying as the combat. That said, there are moments when the platforming can frustrate. The way forward is rarely brightly signposted, and leaping before you look can lead to repeated failure. During heated moments, this can become almost maddening. One particular section I faced had enemies buffed by a totem that doubled their speed, defence and damage, while respawing them on an endless cycle. Trying to deal with that while also trying to identify how to reach the ledge I needed to reach had me close to rage-quitting.

You’ll notice I’ve not mentioned the story yet, but that’s because in every way it feels secondary, and that’s not always a good thing. Without spoiling too much, it doesn’t even properly continue from 2016’s Doom but deliberately skips a chunk of the narrative to be filled in later, and once again your entire motivation is “kill everything and then blow up something big”. There are more cutscenes in Eternal, though, and a handful of returning characters or familiar names dropped into conversation, but on the whole the story is more like rickety scaffolding holding up the altar of bloodshed than a coherent narrative.

It looks bloody brilliant, though. You wouldn’t necessarily expect to see a lot of beauty in a Doom game and, to be honest, a great deal of what you see is things that used to be beautiful only now they’re on fire and covered in viscera, but there a few sky-boxes that will take your breath away, and the detail in environments is impressively attentive. Some areas and textures may be re-used, but the blooms of blood and fountains of brightly-coloured loot never get old, and the animations of the Glory Kills are far more varied than in Doom 2016. The trade-off is an occasional glitch here and there, and I noticed a stutter during some of the more frantic encounters – but this performs unbelivably well for the speed and ferocity of the gameplay. A battle pass system is in place that allows you to earn Event points as you play to unlock cosmetics mostly for use in multiplayer. ID cards, icons, outfits and emotes, etc, give you something to work towards and, as of writing, there’s no online store to buy boosters, though there may be one at launch. The multiplayer itself is kind of just okay, and escapes heavy scrutiny right now because a) it’s difficult to get a game pre-release, and b) it’s churlish to complain about having the option to play multiplayer even if you probably won’t use it. There are people who’ll get invested, I’m sure, but for me it feels a little superfluous to requirements.

It’s called Battlemode and features a 2-v-1 set up where a single player takes the role of Slayer while the other two select demons to run around as, including the Mancubus and Hellknight. The demon players can spawn minions in the form of imps and possessed marines, and can remove pick-ups from the world. However, they can’t remove pick-ups that have fallen from the slain player-controlled demons. In order to win, the Slayer must kill both player demons within 20 seconds of each other. I played a few rounds and found it to be fun enough, but it feels like something that exists secondary to an incredibly competent and complete single player campaign.

Doom Eternal genuinely doesn’t give much of a crap what you think of it. It doesn’t care if you’re hardcore or not because it knows full that if you’re not, then it’s not for you. It’s loud and brash and hellishly violent, but above all it’s 100% video game. It’s not trying to be an interactive movie, political commentary or thinly-veiled ad campaign; it’s a game about killing demons as quickly, as messily, and as efficiently as possible. It wants you blast your way through every one of its gargantuan levels (and believe me, some of these levels really are huge) with a stupid grin that only leaves your face when you’re scowling with rage at a sudden and deliberate spike of difficulty. Doom Eternal might not be the perfect video game, but it absolutely is the perfect Doom game.

Doom Eternal is loud, brash, hellishly violent, and 100% entertainment. It might not be the perfect video game, but it absolutely is the perfect Doom game.