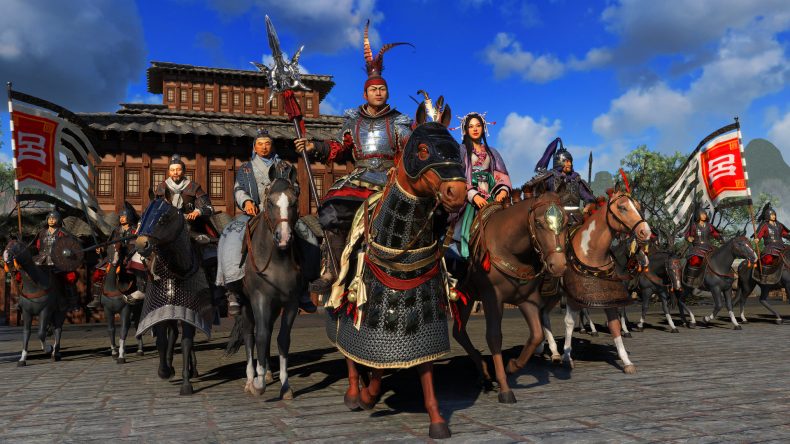 Over the many hours I’ve invested in Total War: Three Kingdoms since its launch, I’m always struck by the same feeling. That inescapable truth that as much as I’m consuming Three Kingdoms, it’s also consuming me. Far too frequently I lose entire evenings in its vast world of strategy, battles and diplomacy. The urge to just play through one more season, one more year, conquer just one more foe is too hard to shake. And it’s fair to say that I felt exactly the same way whilst playing the latest A World Betrayed DLC. Although for the first time, I’m not as convinced it was the new content that was keeping me hooked, rather than the addictive main game itself.

A World Betrayed – the third DLC for Total War: Three Kingdoms – is set in a slightly later time period, 194 CE. The crucial difference is now, Dong Zhuo is dead, slain by Lü Bu, and as such, all the various warlord factions are again vying for supremacy. The new content sees you able to take control of Lü Bu and his power-struggle with Cao Cao. Alternatively, you could opt for Sun Ce’s journey in the South of China as he seeks to step out as a vassal of Yuan Shu and establish his own faction. Both storylines are about betrayal, hence the DLC title, but also about each warlord trying to establish their credentials and earn respect from others. As is customary now with Three Kingdoms DLC, each of these storylines adds not only new units to discover but also some new mechanics unique to each story. Opting for the aggressive Lü Bu, you’ll have Momentum at your disposal, which allows you to replenish your movement range after beating an enemy in battle. This, in theory, means you can keep moving from enemy to enemy all in one turn if enough are in close proximity. Defeat legendary warriors, and you’ll also gain access to bonuses in the Greatest Warriors Panel.

It certainly puts the emphasis on all-out combat which is enthralling at the start. But as those who have invested time in Three Kingdoms will know, it’s easy to over-stretch yourself, and find yourself struggling to survive. Whilst it’s clear the focus of the Lü Bu campaign is relentless combat, you still can’t ignore the financials or well-being of the population you have taken control of. When it works, it feels liberating, akin to the energetic warrior Lü Bu is portrayed as. But, at times it can often feel restrictive, almost like the game is punishing you for playing a way you need to play to maintain balance. And there were times when I longed for a campaign without such restrictions. Sun Ce’s campaign felt much more in keeping with the balance required, whilst still adding some interestingly tweaked mechanics. Sure the “rise from nothing to greatness” story isn’t novel, even in the story of Three Kingdoms. However its focus on tactical expansion along the Yangtze river and having to deal with the looming threat of the bandit Yan Baihu felt more engaging. Rewards are based on how experienced your Court is, so surrounding yourself with high-level followers is key. The Shared Experience mechanic which pools experience and allows you to spend it on whoever you feel needs a boost goes hand-in-hand with this new Court dynamic, keeping you in control.

There’s also the Reckless Luck counter, which declines over time and needs to be kept above zero to keep Sun Ce alive. It also pays to keep it high for better bonuses. Completing various missions can see this Luck restored. It’s a useful way to encourage you to follow Sun Ce’s story and embrace his reckless missions and need for a strong Court. However, once you do get to the stage where you’ve done enough missions, your Luck just stays at maximum and it becomes something you don’t even consider anymore. I’m sure on harder difficulties it becomes more of a consideration, but as a mechanic, it shouldn’t be obsolete at any difficulty level.

And that’s the problem with both of these new factions, in that both never completely land with what they’re trying to accomplish. They’re both good in principle and start off quite interesting. But they either lose that interest over time or their mechanics become redundant, meaning you could be playing the base game, or another expansion instead. The stories of both characters are reasonably engaging, but they don’t feel like they have as much weight as others already told so far. Equally whilst the mechanics feel new in the DLC, they aren’t as impactful and well-executed as they are in say Mandate of Heaven. I want to stress that this DLC is still enjoyable and fans of Three Kingdoms and the period will likely find enough here to pique their interest for a while. Up until now, we’ve had a solid vanilla game and DLC content that has further enhanced the overall experience. There was always likely going to come a point where something is only “good” instead of “great” felt like a bit of a step backwards, and A World Betrayed is it.

With new units to unlock, new areas of China to explore, two new well-known factions to control for the first time in Lü Bu and Sun Ce and new mechanics, there’s certainly enough content to seek your teeth into. It’s not a DLC that can be accused of being lite or feeling rushed. If anything its new ideas just don’t quite fit with the main experience it has finely crafted up until this point. For many that will be enough, and A World Betrayed will be just the change of pace they need to freshen up the many hours already spent in its current world. Others will find it doesn’t quite hit the same high mark as other DLC content has previously.

Total War: Three Kingdoms’ sprawling, highly addictive strategic gameplay has quite rightly garnered plenty of fans. And frankly, any new excuse to literally lose yourself in its world of combat and politics is a welcome one. A World Betrayed might not be the best DLC this title has to offer, but it certainly provides enough new content to justify its existence in the Three Kingdoms family.

A World Betrayed is a decent DLC offering for Total War: Three Kingdoms, offering some interesting new content. However, it doesn't seem to quite land as sweetly as previous DLC.