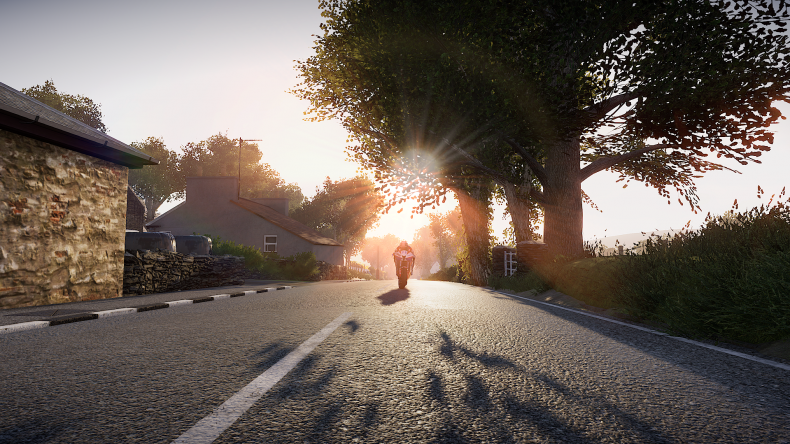 TT Isle of Man races are terrifying. Have you ever watched them? Watching an onboard camera view will have you wincing at every corner, the sheer speed on display. TT Isle of Man: Ride on the Edge 2 recreates that sense of speed with frightening accuracy, as you take to the historic Snaefell road circuit and other roads throughout Ireland and the UK.

Let’s get this out of the way up front, the previous game wasn’t great. To KT Racing’s credit, the team went to real riders Davey Todd and Julien Toniutti in a bid to improve the physics and handling for the sequel, which has definitely paid dividends. The bikes sometimes feel a little too twitchy, but they’re mostly fun to handle as you barrel down the coast at ridiculous speeds, the wind whipping by as it threatens to drown out the sound of your engine. You’ll start off your time in TT Isle of Man: Ride on the Edge 2 with a short tutorial, much like the first game. It runs you through the basics of riding the bike, even forcing you to play a little with the pro handling model and manual gears, letting you see which settings suit your play style. This is a nice way for veteran players and bike sim enthusiasts to see how the full sim mechanics work, right from the start. Not a huge deal, but nice nonetheless.

With that complete, you can jump into a few different modes, including the usual single events and whatnot. What you might not expect is an open world environment to ride around, allowing you to simply enjoy some time outside of the hectic races. Within the Career mode, you can even come to this area to complete challenges and generally test out that new bike you just bought, or your new team’s bike. Honestly, it made me yearn for a Forza Horizon-like game with bikes. Or for Playground Games to add bikes to its next Horizon game. But I digress.

The main event in TT Isle of Man: Ride on the Edge 2 is its impressive Career mode. Not just a series of races for the sake of it, you have to earn your place in the Tourist Trophy (that’s what TT stands for) by riding for a team during set races, earning signatures that will eventually allow you access to the TT events. You will need eight signatures in total, otherwise you’ll have to wait another season before you can try again. In between these major races you can race in filler races, either on your team bike or one you’ve bought yourself, to earn money, reputation and Perk points. Perks and Perk points act very similarly to the Forza Motorsport cards that you could equip, such as reducing penalties or adding ballast to your bike. These Perks can help or hinder you, but you have to pay a fee to use them in the coming race. It’s a risk/reward thing, as you might fail to meet the objective to reap the rewards, or simply throw away a good Perk on an inconsequential race event. They don’t really add much to the game, but sometimes they do something like reduce the AI’s performance for a race, which can work really well if you use them at the right time.

The AI is probably the biggest complaint I have with TT Isle of Man: Ride on the Edge 2, as sometimes it feels like one or two competitors ride well beyond the capabilities of everyone else on the road. This is doubly problematic during Time Trial events, in which you are entirely at the mercy of the AI’s speed. During a couple of longer events, especially those taking place on the treacherous Snaefell route, I found myself riding at my absolute limit and still being well off the pace of just one or two of my direct competitors, despite being well ahead of the rest. Of course, sometimes it was because I made a mistake and clipped a curb (which absolutely will throw you from your bike in a sickening crash) or simply took a poor line through a set of corners, but other times it felt like nothing I did would have made a difference. That said, the Career mode’s overall difficulty is quite balanced. Each week on the career calendar, you will be given up to three events to choose from, ranging from easy to hard. Some take up more calendar time than others, which nudges you into moving out of your comfort zone, especially if the easier races will prevent you from entering the next signature event. The harder the difficulty of the event, the better the rewards.

Rewards come thick and fast as you play through your TT career, from Perks and Perk points to cold, hard cash, and completing some challenges and contract objectives will earn you new bike parts. As you progress, you can buy new bikes and upgrade them, making them more competitive for those tougher events. Upgrades are easy to understand too, with higher levels denoting better performance. It’s simplistic, but still offers all the technical information that hardcore bike fans want to see. It’s nice to see classic bikes too, which really display the difference in handling compared to modern bikes. They’re so much heavier, making it more difficult to get around tighter corners at speed. It makes for an interesting challenge.

TT Isle of Man: Ride on the Edge 2 is an impressive sequel, delivering a terrifyingly realistic representation of TT racing. You have to be mindful of the smallest things like curbs and dips in the road, which are nigh impossible to see at such high speeds, but will have dire consequences should you approach them wrong. You will make mistakes and you will crash, sometimes costing you a podium position, but you’ll still progress and learn how to handle each bike. And when you’re speeding along the coast, you’ll have a smile on your face. Or you’ll be screaming in terror at its incredible pace.

TT Isle of Man: Ride on the Edge 2 is a huge step up over its predecessor, pairing its terrifying sense of speed with an improved handling model and a varied career mode.