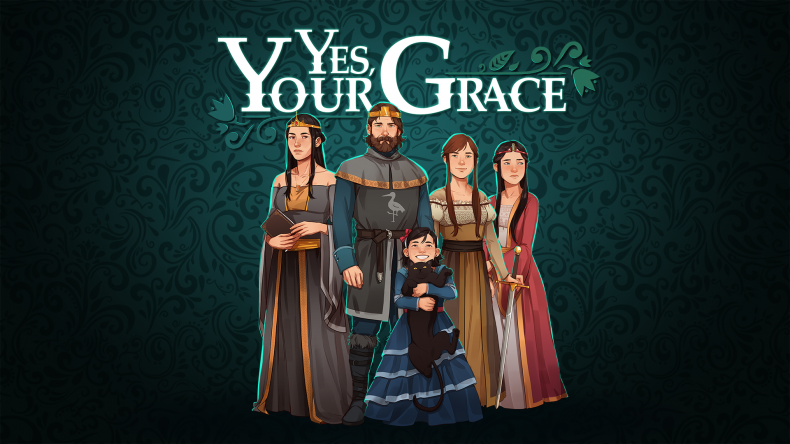 Had Yes, Your Grace been released this time last year in the lead up to the final, shambling season of Game of Thrones, I’m sure it would have sold in buckets. A kingdom management sim with a difference, it keeps the decision making on a much smaller, more personal, yet no less vital, scale.

You take control of the beleaguered king of Davern, a fantasy kingdom on the edge of war with a neighbouring land of barbarians, who must deal not only with the threat of annihilation, but with quarrels in his household and in-fighting among his subordinates. It’s a game about decision-making, though I should say right from the off that a few of the big decisions only have one outcome anyway. It’s not as big an illusion as you get in a TellTale game, but it’s illusion nonetheless. The bulk of the game is spent sitting on your throne making kingly decisions. Each week, a fresh group of petitioners will arrive asking for stuff. You have a limited pool of gold and supplies, and only a few Generals you can despatch as agents to deal with things head-on. You can see petitioners in any order, but you’ll rarely be able to help everyone. An example comes early on, when a lower noble asks for help freeing his daughter from kidnappers. I despatched my only General to help him, but then the next person needed help tracking down his missing son and all I could offer him was gold and condolences. While the noble gave me a reward and pledged allegiance in the coming war, my treatment of the peasant came back to bite my royal arse later.

You’ll also need to deal with prisoners and criminals, choose whether to build taverns and invest in business, take out loans you’ll struggle to repay, and attempt to build alliances with the various nobles of the surrounding lands, many of whom hold grudges against you or each other. And then there’s your family to contend with, a loyal wife and three bickering daughters, one of whom is the subject of a promised betrothal to the encroaching army’s king. Occasionally, you’ll make a decision you think is right for everyone, and the plot will throw an unexpected curveball at you. To be honest, these moments are frustrating, as they make everything you’ve done feel a little pointless. Now and then you’ll need to fight a battle, which largely consist of you directing the troops from the walls. How you’ve behaved and the decisions you’ve made in the lead up determine how well you do or if you lose any main NPCs, but the course of the game’s year-long running time (separated into weeks) leads up to the big battle against Radovia, the barbarians who want your daughter. Making decisions always feels like it carries weight, but it would be nice to have stronger dialogue options.

Perhaps the biggest fault of Yes, Your Grace is that, while it lets you decide the kind of ruler you want to be, it doesn’t let you decide the kind of man you want to be. The king himself is something of a put-upon lump, pushed around by almost everyone. There are some dialogue options that allow you to bite back or reprimand people, but no one seems to really fear you. Even the petitioning commoners give you snide remarks as they skulk from the throne room. And there are a few dignitaries whose heads I’d have gladly piked outside the walls.

For a pixel-art game, Yes, Your Grace tells its story very well. Every dejected shrug from the increasingly anxious protagonist, every curse shouted between squabbling princesses, every threat of violence from an enemy or plea for help from a subject is communicated with a level of emotion that you don’t often see in this art style. A lot of it is down to the writing, of course, but there’s definitely sense that you understand what’s going on and you can’t help but care about Davern.

I’d have liked more lasting choices, to be honest. It’s great when an early decision returns to haunt you or benefit you later, but there’s not enough of that, and with such a low-maintenance art style it would have been nice if the story was more malleable and changeable. As it is, while the minutiae of day-to-day governing is yours to toy with, the biggest decisions are ultimately made for you. Still, Yes, Your Grace tells a decent story in an enjoyable way, and there’s really nothing else like it outside of a certain fantasy TV show with a piss-poor ending.

Some bigger choices are forced
Can't really decide your personality

Yes, Your Grace tells a decent story in an enjoyable way, and there's really nothing else like it outside of a certain fantasy TV show with a terrible ending