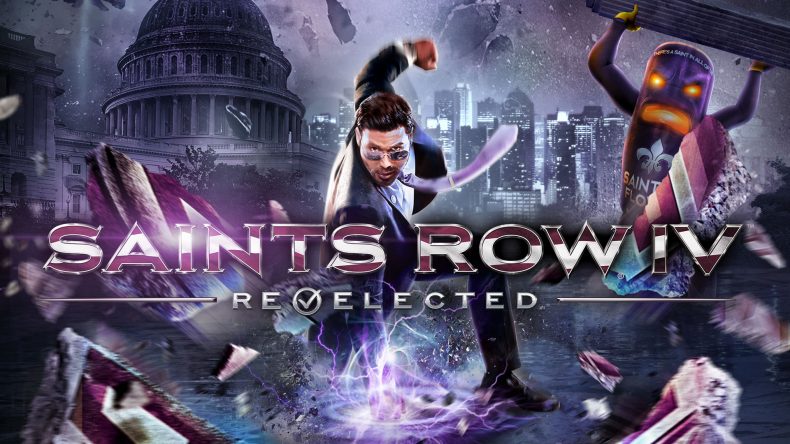 Calling Saints Row 4 a silly game is like calling Doom Eternal a bit violent. Volition’s final entry into their used-to-be-like-GTA-but-not-anymore franchise came out a whole seven years ago, and I have to wonder if the reason they haven’t followed it up is that they created something they simply can’t top.

Volition’s third-person actioner begins with your character, the Boss, elevated from gang leader to actual Commander and Chief of the United States. Between deciding to either cure cancer or solve world hunger, leading counter-terrorist missions, and punching snarky Senators in the bell-end, you have a pretty full schedule. Having promoted all your gang members to prominent positions in the Administration, you’re the king, or queen, of the castle, and despite your waning popularity, you’re pretty confident of walking away with Election Day. This confidence is almost a theme running through the whole game, as Volition hold absolutely nothing back from the first moment to the final explosion. With barely a hint of prologue and zero foreshadowing, aliens of the Zin Empire descend on Earth, kidnapping your staff and friends before blowing up the planet and dumping you in a VR simulation of a quaint 1950s town. Before long, though, you’re working with your ever-loyal tech genius Kinzie, who has escaped the enemy’s clutches and hacked the simulation to give you powers that wouldn’t seem out of place in The Matrix.

While there are missions set in the “real world” aboard the alien mothership that let you do little but shoot bad guys, the bulk of the 20-hour campaign is spent inside the VR sim of the city of Steelport. In here it doesn’t take long to become a veritable god, as you unlock new powers and weapons at a deliberately swift pace. You’re soon leaping buildings and tossing cars around you’re playing Crackdown but with much better writing, and the more you unlock the more fun it gets.

In fact, almost all of Saints Row IV: Re-elected seems to have been created in the service of fun. The Boss is written with such a perfect mixture of insurmountable self-confidence and dry humour that he or she is able to bounce off every other character effortlessly. I say “he or she” but, for me, Laura Bailey does such a fantastic job of the default female President that, as with Jennifer Hale’s Commander Shepard, the other options just don’t quite cut it. But you don’t have to pick the default, of course, and all options, races, and colours (literally, you can be any colour, even bright blue) are viable. Even once you’re in the game you can alter every aspect of your character at various outlets, because why the hell not? Primarily, your goal is to destabilise the simulation to free your friends and overthrow the Zin, but that doesn’t mean you can’t mess around with the minigames and side missions along the way – and Insurance Fraud is still some of the most ridiculously fun time-wasters ever devised. To be honest, no one would blame you for just driving around Steelport with the radio on, just to sample the incredible soundtrack.

There are faults, of course, but none are a result of the Switch port. The Re-elected edition fixed many of the original issues when Volition brought Saints Row IV to the current generation, and that’s the version you’re getting here. It can be janky and buggy at times, and the weapon wheel being mapped to the A buttom is just plain weird, but there’s so much going on and it’s all so much fun you probably won’t care.

If anything, Saints Row IV: Re-elected may suffer in the eyes of some simply because its comedy and themes feel like they’re from a game that was close to the knuckle even seven years ago. Its humour is often puerile, wilfully offensive, and certainly vulgar, but it’s also weirdly earnest now that it has finally stopped trying to ape other games. After all, Saints Row IV was the release that finally allowed Volition to get out from under Rockstar’s shadow, even if it was eclipsed less than two months later by the behemoth that was GTAV.

This edition plays and looks the same as the PS4/Xbox One version and, while I wouldn’t call it “essential” necessarily, it’s absolutely worth a look for anyone who likes their fun to be big, loud and just a little bit irreverent.

While I wouldn't call Saints Row IV: Re-elected "essential", it's absolutely worth a look if you like your fun loud and just a little bit irreverent.