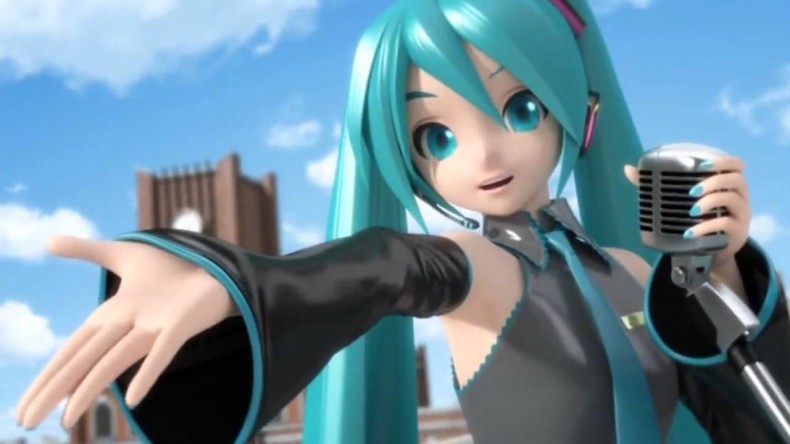 Many people won’t have heard of Hatsune Miku. While the likes of her are quite big in the East, here over on this side of the world she is slowly growing in popularity. Not so long ago she was on the David Letterman show and even earlier this year she opened for Lady Gaga. She’s not doing too badly for a virtual J-pop Diva.

Yes, J-pop. It’s an acquired taste. I wasn’t much into it, and I’m still not. But after playing Project Diva f on my Vita I got hooked on Miku and the great songs she sings. She’s a great character, she’s beautifully designed, animated and has a wonderful charm to her that really sells you on the concept that this character is the one that is singing, rather than Saki Fujita who is the person providing her voice by way of Vocaloid. The last game, Project Diva f, required you to hit buttons in time to the music. Icons fill the screen and a second icon scrolls in from the side; when the two line up you press the button. Sounds quite simple, really. What ties your fingers in knots is the way the symbols require you to move between the buttons, the d-pad and the touchscreen as the songs grow more and more complex in their patterns. Each input is rated from “Cool” to “Miss” by way of Good, Safe and Bad. Safe, Bad and Miss will cause you to lose your button press combo – Safe will at least preserve your position on your Song energy meter – but if that energy runs out you will fail the song.

Good and Cool ratings will fill up a bar across the bottom of the screen, which in traditional rhythm action fare has to be filled to a certain point to pass the song and rate your performance. A Standard performance or higher will pass the song and unlock the next for you to play. Perform well and you earn Diva points which can be used to buy items for your Diva or her room in the Diva Room mode.

Project Diva f 2nd, then, is more of the same and this is no bad thing. The songs are still really catchy, the music videos are amazing (these guys really know how to put a music video together) and the button combos will have your fingers dancing around as you tap your feet in time to the tunes. But they have made it harder, much harder. For starters, they’ve reduced the input window for button presses so that now it’s a lot less forgiving. Where before I would have a majority of Good and Cool ratings, now I’m likely to hang around Good and Safe. This is exacerbated by the increased complexity of the icon movements and patterns that they’ve put together. Don’t get me wrong, it’s brilliant fun, but at times I was really struggling to keep up. Thankfully there are several modifiers you can use if you’re having trouble with particular songs. You need to pay Diva points to use them, and they’ll reduce the amount of points you get for completing the song, but when you can graciously expand the input windows, simplify button sequences or restore your song power, that’s a sacrifice you will find yourself willing to take. You could also go the other way and use these modifiers to make the game even harder, but why would you want to do that?

Completing one track opens up the next and also allows you to watch the song on its own as a music video. So, if you have a favourite (or many) you can go back and watch them without the distracting icons zipping all over the place. There are many top tunes in the game, Glory 3usi9 is a blast to play, Miracle Paint is a fantastic slice of J-pop style 1950s music that you could imagine a couple doing the Charleston to on Strictly Come Dancing, and who can forget Ievan Polka which plays jauntily through the tutorial. But nothing on the list really hits the highs of the previous game’s soundtrack, Cat Food and World’s End Dance Hall being two of the best examples for me.

If you want to play about a bit with the music tracks, there’s an edit mode that can be downloaded via the Playstation Store for free. Why it’s not part of the game from the off I do not know, but it allows you to customise parts of the video such as the character’s expression, mouth shape and posture. It also allows you to make your own button placements, so you can try and out-do the game in its difficulty. Aside from Miku there are a host of other characters in the game, and she frequently has a partner or is sidelined for one of the others. However, they lack the design flair and charm of Miku. The songs they sing are great, the music videos sublime, but I find them impossible to warm to, unlike the mascot herself.

All in all, Project Diva f 2nd is fantastic. It’s harder and not quite as good as its predecessor, but it’s definitely very, very fun. It is hard to recommend the game to someone who doesn’t like J-pop and the idea of Divas, but I would recommend downloading the demo of Project Diva f and giving it a try. It’s toe-tappingly good and a hearty challenge, and quite often that’s all you really want in a music game.

Project DIVA F 2nd won’t appeal to everyone, but you really should give yourself a chance to love Miku.

Minecraft: Story Mode Season Two – Episode Five: Above and Beyond Review
Be the first to comment!
Leave a reply »