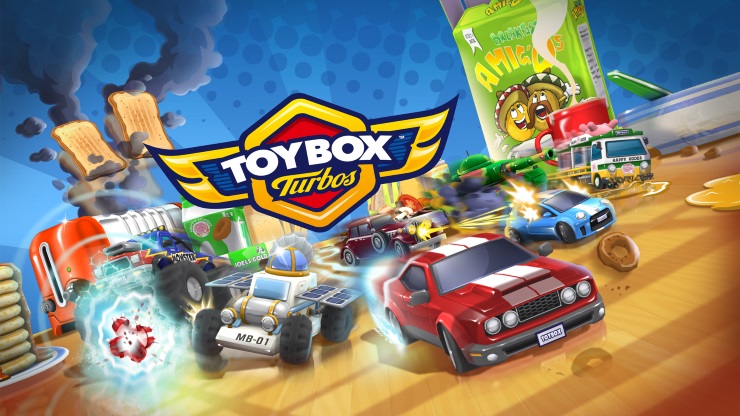 If imitation is the sincerest form of flattery then what’s making the same game under a different title because you probably don’t want to use the old title anymore? Compromise? Probably compromise. Not that it matters, really, it’s just strange to call this new Micro Machines game anything other than Micro Machines.

Because Toybox Turbos is Micro Machines, it’s just not using the moniker. It’s a game about driving miniature cars around cereal strewn breakfast tables, worktops joined by rulers, and pool tables with magical teleportation pockets while thumping each other with mallets and trying to pull the screen away from your friends. It’s Micro Machines.

And that’s not a bad thing at all when you consider that there hasn’t been anything to fill this local multiplayer void in ages. This is the original publisher returning to its craft to set things right, and they absolutely have set things right. Well, mostly.

Grab three friends locally, or hop online with a trio of mates, and Toybox Turbos is a riot. The 35 vehicles and 18 tracks combine to create a good deal of diversity in potential setup (the cars each slot into seven categories that each have unique wrinkles) and the traditional elimination game type is the same friendship testing genius it’s always been. Unlike traditional racing games, the idea in Toybox Turbos is to eliminate the other racers to claim points, where being eliminated loses a point. You can do so by hitting them with certain weapons, acquired Mario Kart style from item boxes, or by pulling the screen too far ahead of them. When one player remains, the four line up again and the struggle begins anew.

The quality of this mode is helped by Toybox Turbo’s controls that are just loose enough to ensure that players need to think about every turn, and can’t auto pilot around bends by simply holding accelerate and turn. Cars have wide turning circles, while alterations in geometry and other factors (like liquids on the course) constantly affect your decisions as you approach each individual turn.

It’s a superb multiplayer setup as the struggle for power is in constant flux. It’s a racing game that does everything to keep opponents close and races tense by replacing the long haul with a series of scrappy encounters that all add up to a whole. It’s the messy sketch show of the racing world, and it makes for exemplary social viewing. Toybox Turbos isn’t so good at amusing single players, however. It does its best, offering up a variety of challenges across the seven vehicle categories, from more traditional races, to time trials and one-on-one elimination races, but the spread is barely enough to sustain an average gamer for two hours, and that’s a generous estimate. Going for high scores may sustain some, but if you don’t plan to play with friends then Toybox Turbos is a hard game to recommend.

Also, while it’s undoubtedly fun, it does have certain presentational shortcomings. It’s a weight thing. Toybox Turbos cars feel attached to the track, but they don’t feel like they have any presence in the world. The machines sort of float through the air if struck, glide on their side when flipped, push objects around the world like it’s all made of ice, and crash with all the intensity of a feather duster on a kitten. The handling is good enough that these things don’t ruin the experience, but it makes the car versus car driving notably underwhelming.

Animation is also lacking. For example, a section in a kitchen level sees you launched to another table via a toaster. The game retains the whimsy of past Micro Machines games with elements like this, but the way the car is launched has no sense of acceleration or gravity to it, giving a very amateurish vibe to the scene as the car magically floats from A to B. This isn’t enough to undermine the fun when played with a clutch of friends, but it’s enough to undermine the sense of quality around the final product, and certainly doesn’t help make the single player game any more appealing.

Toybox Turbos is Micro Machines, and that’s no bad thing. Pull three friends together (online or off) and the classic, fast paced, anarchic fun of elimination mode could last for hours. The game still lacks in single player thrills, but that’s an acceptable caveat now that I can once more get together with mates for a few laps around the breakfast table. Welcome back, Toybox Turbos.

The multiplayer classic returns to its roots under a new name. If you have three friends to join you, online or off, Toybox Turbos is the true heir to the Micro Machines crown.