Hearthstone: The League of Explorers Review 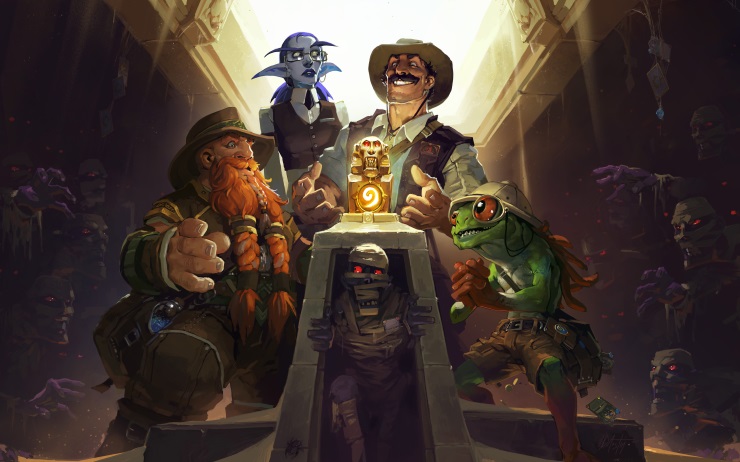 The League of Explorers has been released completely and I think Blizzard has just topped everything they have done for Hearthstone. Solo Adventures are about fun battles against AI controlled bosses, new cards, and maddening Heroic mode battles, and The League delivers on all counts, becoming an essential purchase for anyone even remotely invested into Hearthstone.

My initial impressions were positive and I’m glad my experience has only gotten better with each new wing. This expansion is a four wing adventure, as opposed to what we are used to with Naxxramas and Blackrock Mountain. The focus on letting players choose their own fate really adds to the experience. Instead of just AI controlled bosses, there are unique moments like the Mine Cart Rush, and one where your cards will be used against you. Each boss fight felt different and fun. I haven’t bothered going back to the previous expansions but I find myself trying out different decks often even though I’ve unlocked everything. This is the kind of thing Blizzard needs to focus on in single player adventures. While many treat single player adventures just as a front to add new cards, this raises the bar not just in the cards it offers but also in the overall playing experience. Each of the new legendaries unlocked have effects never seen before across any cards. Reno Jackson heals you up completely, while Elise Starseeker (my favourite) shuffles a card into your deck that can change the tide of the rest of the game. The Map to the Golden Monkey will shuffle the Golden Monkey into your deck, and that will transform all your cards into legendaries. Sir Finley Mrrgglton lets you switch your hero power by discovering a new one. The production values are also higher here with quality entrance animations across the board.

Playing boards are very important because while waiting for your opponent to play, you keep clicking or tapping the environment and playing around. The League adds two boards to the rotation with the Uldaman, and the Hall of Explorers boards. My only complaint about these boards is how similar in overall appearance they are. I was hoping for a slight change in overall colour. Visuals throughout the new cards and animations are top notch. It’d be great to see Blizzard release an art book to showcase these things at some point, because single cards have more detailing than most games box art do at this point. After being let down by the voice acting with the new Hero portraits, The League is a refreshing step up. Both the music (including the theme) and the voice acting is on par with the great visuals – I could listen to Elise Starseeker talk all day.

Now that the complete solo adventure is available to players, The League of Explorers is easily the best expansion Blizzard has given Hearthstone players since launching the game. I cannot wait to see what Blizzard has in store for Hearthstone next, because I’m still as hooked as I ever was.

This isn’t just the best Hearthstone expansion to date, it's one of the best expansions I’ve had the pleasure to play for any game.

Tetris Effect: Connected Switch review
Back 4 Blood: How to unlock the other characters
Metroid Dread: How to beat the final boss
Metroid Dread: How to defeat the purple EMMI on Ferenia
Far Cry 6 | How to play co-op
How to transfer your Nintendo Switch data to the new OLED model
How to transfer your Death Stranding save file to Director’s Cut
Social Media
SUBSCRIBE
All content copyright GodisaGeek.com
Fonts by Google Fonts. Icons by Fontello. Full Credits here »
Posting....